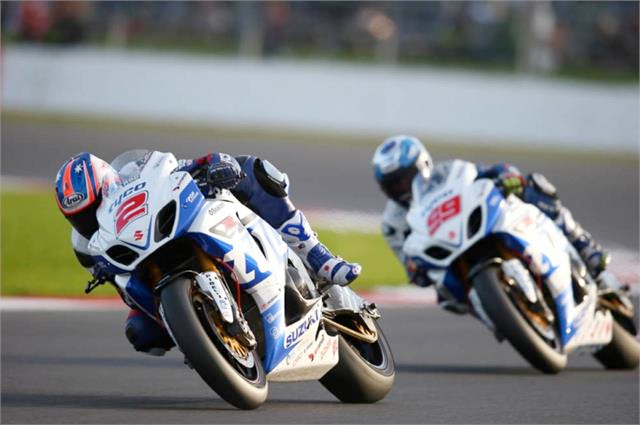 Josh Brookes first mechanical retirement for Tyco Suzuki in almost two seasons put a halt on his' British Superbike title aspirations for the Northern Ireland-based team, during the penultimate round at Silverstone over the weekend.

Brookes took fifth place in the second encounter, one place ahead of his 20-year-old American team-mate PJ Jacobsen, who had a phenomenal weekend as a BSB rookie, with fourth place in race one after posting an impressive front-row start during qualifying.

"I'm disappointed again." Brookes stated. "In practice and qualifying I had some chatter issues that didn't really go away, although they certainly got better in the races, which is a positive.

"Our general package wasn't just quite good enough to compete at the front this weekend. It has been before, but for whatever reason, we've either lost some pace or I've lost some form - or the other guys have just found extra performance from their machines.

"At the minute I just can't match what I've been able to do in the past. Race one was out of my hands, but in race two, PJ wanted to get ahead of me, and fair play to him, but it created a gap and once you lose that draft on the front guys, then the race for the podium is over really." Brookes added.

PJ Jacobsen was pleased with his weekend's work at Silverstone.

"The weekend was really good for me and my GSX-R1000 was working really well from qualifying into the two races today," said Jocobsen. "In race one I was up dicing with Bridewell and finished just eight seconds off the winner, and my race-pace was pretty good.

"The second race was a bit of a struggle in the beginning but I managed to get in behind Brookesy and we diced-it-up a little bit. The boys at the front got away, but I tried to pass Josh at the last corner on the last lap but he just came back past me on the outside.

"It is what it is and we can take the positives from Silverstone going into the final round now at Brands Hatch."

Team Manager Philip Neill was disappointed to see his teams championship aspirations come to a virtual end at Silverstone.

"We are obviously very disappointed to see our championship aspirations virtually come to an end for 2013 here at Silverstone today; although if I'm honest, I think we had a very steep hill to climb in terms of our championship hopes, with the damage having been done in previous rounds." Neill admitted.

"It's never nice to see them end with a 'DNF' for Josh, but we have to be realistic and say that we never really challenged the front-runners for pace all weekend.

"For whatever reason, Josh seems to have lost some pace in recent rounds and it's something we need to address before Brands Hatch, as we would still like to go out on a high. It's been a long, hard season for Josh and he's had some fantastic races both in BSB and on his road racing debut this year on GSX-R machinery.

"Unfortunately we've fallen that little bit short with our championship challenge this year again. All we can do is re-group as a team and come back next year and go again.

"What can I say about PJ, other than he was majorly impressive again this weekend. He showed great pace all weekend and continued to amaze people with the lap times that he can turn in. He was right on the pace with the leaders in every session, proving that the GSX-R package is as good as anything out there.

"Yes, he still has a bit to learn in terms of race craft, but that is to be expected for a 20-year-old rookie learning new circuits on a Superbike. He was very unlucky to miss-out on a second successive BSB podium in the first race and had a good battle in the second race." Neill continued.

"He is coming on in leaps and bounds and we're now looking forward to seeing a good strong end to the championship for him at Brands Hatch."

Top Image: Josh Brookes BSB title hopes were all but dashed after a race one crash at Silverstone on the weekend.