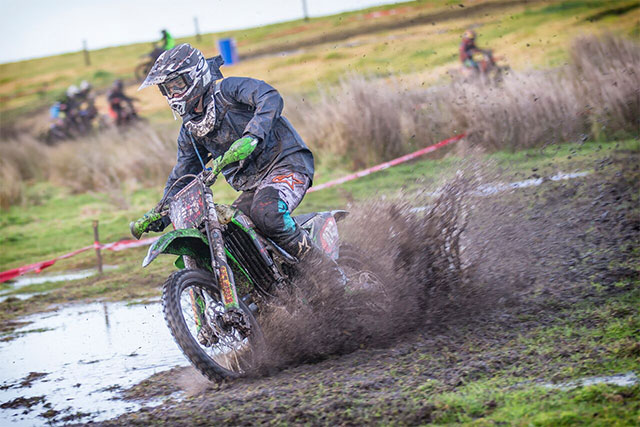 As the Juniors set themselves up on the starting line the skies looked as if they were beginning to clear for the first Cross Country race of the season at the seventh round of the 2016 Yamaha Australian Off-Road Championship at Hedley in Victoria today.

With this being the first time some of the juniors have competed in conditions like this, it was a test of not only speed but the ability to manoeuvre around the mud and through the yards of water that layered the sandy cross country track.

In the early stages of the race conditions proved difficult for some with spills and breakdown resulting in riders being forced to DNF.

Sporadic showers and strong winds continued to surprise the juniors as the track became rough and slippery, and at the showing of the last lap board, with half an hour to go it was Mason Semmens (J3) leading the pack overall, while Corey Hammond (J3) sat in second and Jake Gogol (J4) in third.

A crash on the first lap led to bike issues for the young Semmens who couldn‰Ûªt quiet hang on to cross the finish line resulting in a DNF for the KTM mounted rider.

With Semmens out, it allowed Josh Brierley (J3) to slot in to first position taking the J3 class win and the overall win with a time of 1:57:30.728 and showing that he had the skills over these extreme Hedley conditions.

Mitch Brierley (J3) couldn‰Ûªt quite match the time of his brother finishing a close second behind with a concluding time of 1:59:25.076, while Hammond on the last lap slipped down a position to take the final spot on the podium in third.

Battling not only each other but the mud, wind and rain it was Harrison Tetley who clinched first place in the J4 class, while Ashden Gramlick put on another fine performance to claim the top spot on the J2 class.

For a link to the individual results by class from Round 7 of the Yamaha AORC today head to the MyLaps website here.