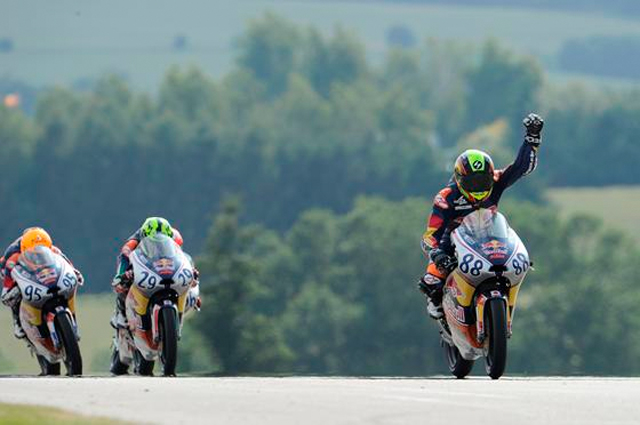 Jorge Martin brilliantly turned pole position at the Sachsenring into race victory while the Red Bull MotoGP Cup leader Karel Hanika was dusting the dirt off his Alpinestars leathers after a last lap crash from the lead in the opening Red Bull Rookies race in Germany.

The 17-year-old Czech was trying to break away from a seven rider battle for the win when the rear tyre let go, he caught the slide only to clash with Stefano Manzi as he tried to get back on line, then slid off the track unhurt.

Manzi, the 14-year-old Italian, held the lead but was then pounced on by Scott Deroue, the 17-year-old Netherlander who had Martin, the 15-year-old Spaniard, on his tail. When Deroue only changed down to 4th instead of 3rd for the penultimate corner, the sweeping left hander at the bottom of the hill, it killed his drive and both Martin and Manzi swept past to take first and second.

Deroue won last year's Race 1 and was not too distressed to mount the third step of the podium.

‰ÛÏIt was a great race, very tough and I really thought I had it worked out on the last lap, I was going for the win, had the lead then just messed up the gears at the bottom of the hill." Deroue stated. "Still there is another chance tomorrow and I think that we can still improve the bike a little bit.‰Û 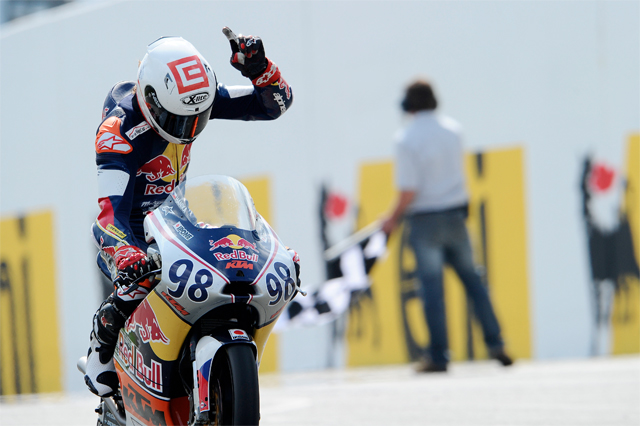 The pair rode superbly, passing the lap record back and forth between them as Martin, the 15-year-old Spaniard made great use of his pole-position-setting-pace to work himself a nice lead. 17-year-old Czech Hanika was slower away from the middle of the front row and only got into second place on lap 5 of the 19.

By then Martin had a one second advantage and he defended it superbly as both riders when faster than either had done in practice, faster indeed than any Rookie had ever lapped the German Grand Prix circuit.

Even as rear tyre wear became a factor towards the end there could be no let-up. Martin had to respond once more with two laps to go as Hanika had finally cut the gap to well under a second and this time the rear tyre snapped round as he got the power on through Turn 1.

Hanika then cruised to victory by almost 10 seconds over a wonderfully intense contest for the other rostrum places that was won by Manuel Pagliani, the Italian 16-year-old, ahead of 14-year-old fellow countryman Stefano Manzi and 15-year-old Spaniard Joan Mir, having his best result of his first Rookies Cup season by a long way.

‰ÛÏIt was an incredibly tough race, perhaps my toughest so far,‰Û