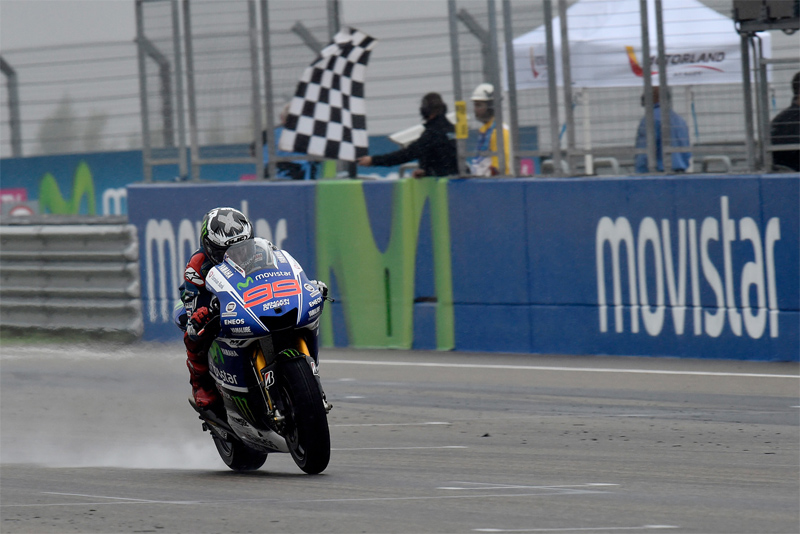 Movistar Yamaha MotoGP rider Jorge Lorenzo defied both his rivals and the changing weather to deliver a master class in Grand Prix riding and claim his first victory of the season after an action packed round 14 of MotoGP action in Aragon.

With a dry start to the race, Lorenzo was one of the few to opt for the soft front medium rear tyre combination and made a jump of three places to fourth in the opening corners. Third was to follow quickly and then a promotion to second as front runner Andrea Iannone became one of the first of many to crash out.

Lorenzo tucked in behind race leader Marc Marquez aboard his Repsol Honda, beginning the Spanish duel that race fans had been waiting for. Never more than half a second apart, it wasn‰Ûªt until there were just 15 laps remaining that Lorenzo made his move through the uphill section of the circuit for the lead. Three laps later Marquez was back through, passing into turn one.

One lap later and the weather became another rival to face on track as the white flag was waved. With some drops of rain falling riders were now clear to change to wet bikes if wanted. The lead group stayed out and with 9 laps remaining Lorenzo mirrored Marquez‰Ûª earlier pass, re-taking the lead into turn one.

A lap later and with the track getting damper in places, Lorenzo slowed and both Marquez and fellow Repsol Honda rider Dani Pedrosa passed in the uphill series of corners. With rain now clearly evident the front three played a dangerous gamble, not wanting to allow the others to get away by pitting.

With four laps to go Lorenzo made his move, diving in to change for his wet bike and returning immediately to the track. In the meantime, Pedrosa had crashed out in the start straight, promoting Lorenzo to second. 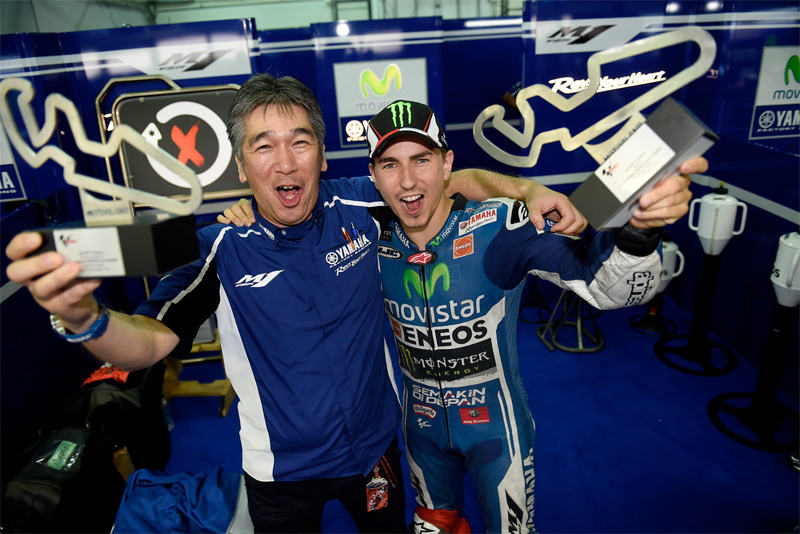 Jorge Lorenzo celebrates his race win - Credit: Yamaha Racing
Race leader Marquez opted not to pit and a lap later also fell victim to the wet, crashing out and leaving Lorenzo with a clear run to the finish line and his first victory of the season.

‰ÛÏIt's been a very crazy race, because we won at a track where we‰Ûªve never won and we‰Ûªve had a lot of problems all weekend." Lorenzo commented. "I made a really good start, my first lap was very good and I kept at the wheel of Marc.

"The bike was working very well and Marc was a little bit slower than in practice so I could stay with him and I passed him one or two times. The problem was it was spitting, so I didn't have much confidence, I was very careful and the others were going away in front.

"Andrea was catching me and I thought I was going to be fighting for third or fourth position. But finally I had an intuition; every lap I felt the spotting was coming worse and it was very dangerous and easy to crash. When I saw Marc and Dani keeping on racing and without going into the pits in the last corner, I said ok, I will take a risk and enter.

"I changed the bike, the new tyres were very difficult to warm up, not so much grip but I tried to be very focused and not make many mistakes. When I passed the board on the straight I was in fourth position so I thought we are going to finish very far but then the next lap I was first!

"I was surprised; I didn't expect to be first. Having this victory is a great relief for me after so many months of challenges and fights so I‰Ûªm very proud.‰Û 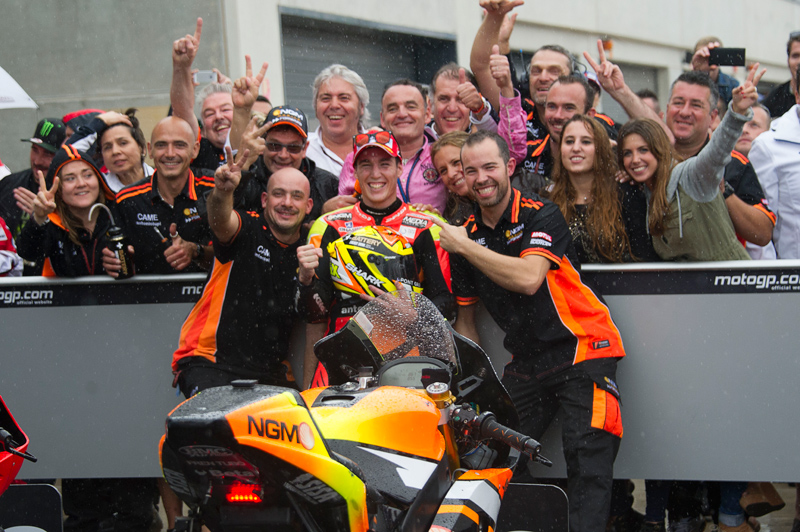 The Spaniard will be remembered as the first rider on the MotoGP podium with an Open bike. Aleix was very good at staying calm when Smith touched him at turn three at the beginning of the race, obliging him to go wide and recovering, lap after lap, from the back to the sixth position.

Starting on with slick tyres, Aleix managed the race perfectly when it started to rain. With seven laps to go, he was the first to decide to enter the pits to change bike. He did it one lap before all the other riders and this was the key of the success of this incredible race that saw him second at the finish line behind Lorenzo and in front of Cal Crutchlow by the slimest of margins.

‰ÛÏIt‰Ûªs my first podium in MotoGP and this is an incredible feeling." Espargaro enthused. "We have worked hard throughout the season to get this result and I want to thank the NGM Forward Racing Team and my family that has always supported me.

"It was a difficult race, made more complicated by Smith who touched me at the beginning of the race, obliging me to recover from the 19th position. When I was sixth, with seven laps to go, I took the risk to be the first rider to enter the pits to change bike, as it was raining a lot.

"It was a perfect strategy. In the last lap I heard Cal catching me, he touched me on the straight but I could defend my second position. It‰Ûªs an extraordinary result and I‰Ûªm going to party till Japan GP!‰Û
Cal Crutchlow had his best result of season with his third place result. - Credit: Ducati (File)
Stefan Bradle was the leading Honda across the line, finishing fourth aboard his LCR Honda, with Bradley Smith and Pol Espargaro finished 5th and 6th respectivley aboard their Monster Yamaha Tech 3 machines.

Marc Marquez was able to re-enter the race despite his crash crossing the line in 13th position, one place ahead of team-mate Pedrosa who also managed to remount he Repsol Honda after his crash.

‰ÛÏToday's race was difficult because I, like many other riders in MotoGP, had never experienced track conditions like this before." Marquez reflected. "It was a shame that it started to rain; if it hadn't, then I think that Dani, Jorge and I would have made the end of the race really exciting for the fans.

"I think that we did a good job all weekend ‰ÛÒ it was just a pity about the crash. I tried to hold on because there were only a few laps remaining, but today I learned that in these situations it is better to use a different strategy.‰Û 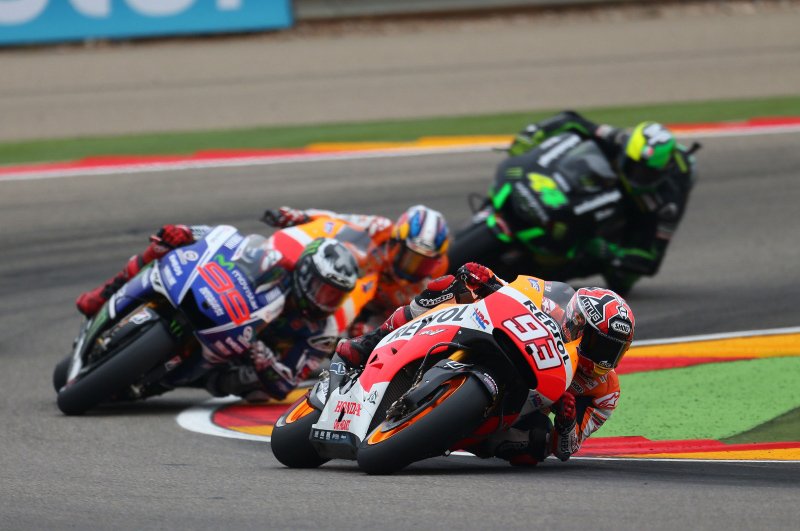 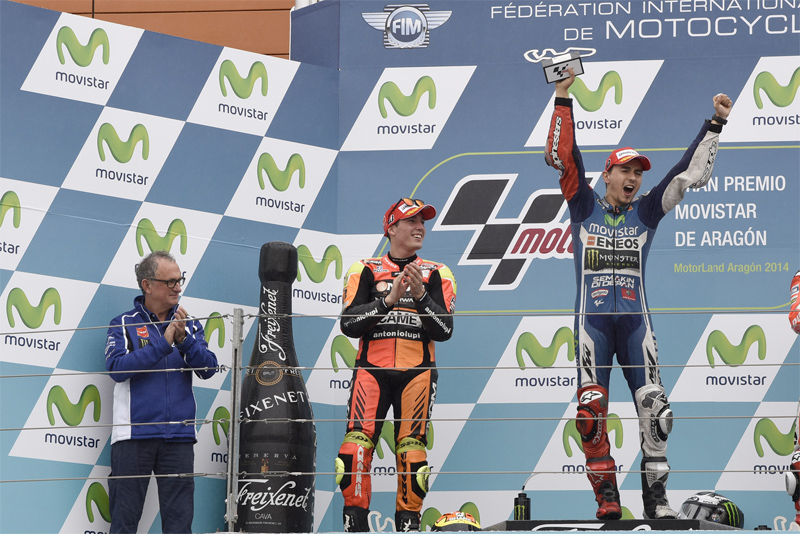