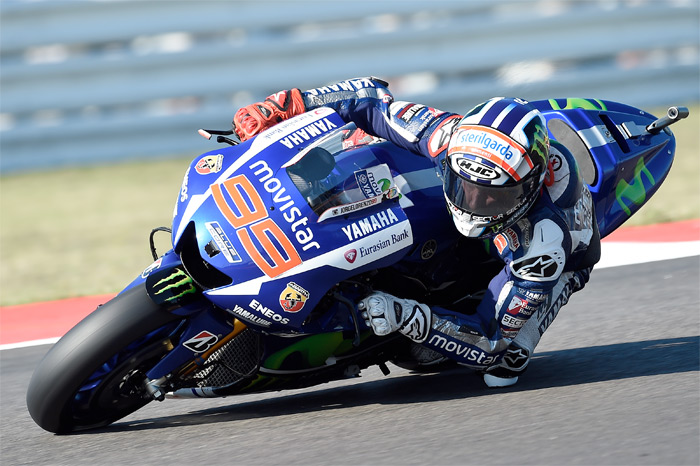 Lorenzo made his trademark early exit from the pits as the 15-minute session began and immediately dropped a first flying lap of 1'32.357s. On a two-stop strategy, he quickly returned to his pit box with ten minutes remaining for a tyre-change and headed back out less than a minute later.

Back on track, he was ready to put the hammer down and bettered his earlier time, clocking a 1'32.146s, another new circuit best lap record, and extended his lead to 0.443s from his closest rival.

With a little more than four minutes remaining, he came in for his second stop. He returned to the track with over three minutes remaining and, though he was unable to further improve on his best lap, his pole position time remained unchallenged, giving him his third pole of the season by 0.106s ahead of Repsol Honda's Marc Marquez.

"Rather than pole position, it's more important to always be first or second; I finished first in all sessions, apart from the first practice, under all kinds of conditions, with new and old tyres." Lorenzo said. "I think we did a good job with the bike during the whole weekend and we have a good setting.

"We just need to change the last details for tomorrow. It's going to be interesting to see how the rear tyre drops as this new tarmac is more abrasive. It will be difficult to keep up the same pace during the whole race, but almost everyone will have the same problems and we are prepared to do a very good race."

Though teammate Rossi had revealed his special helmet, that symbolizes how he is being chased by his rivals, he was the last rider to exit pit lane at the start of the Q2 session.

The Doctor started qualifying by setting a low '33 with a first flying lap of 1'33.190 to take provisional fourth. Hot laps by rivals dropped him to ninth, but the Italian had another two laps and set a 1'32.952, moving him up to fifth before going in to the pits with more than six minutes on the clock.

Having been pushed back to seventh, Rossi started his second stint with two and a half minutes of the session remaining. He gave his all and made the crowd go wild when he posted a hot lap of 1'32.358 for third on tomorrow's grid, 0.212s off pole.

The second Repsol Honda of Dani Pedrosa will lead away the second row of the grid after he qualified in 4th, just ahead of Ducati's Michele Pirro and Monster Energy Tech3 Yamaha's Bradley Smith.

Australia's Jack Miller will start from 17th on the grid.