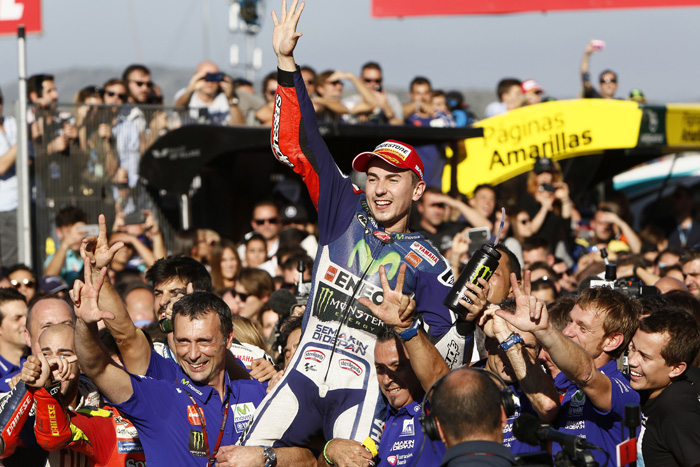 Movistar Yamaha MotoGP's Jorge Lorenzo race to a flawless win at the season-ending Gran Premio de la Comunitat Valenciana overnight to unknown heights as they battled for the Championship Title.

Lorenzo was unflappable as he defended first place from his pursuers from start to finish to secure a brilliant 40th MotoGP Grand Prix victory of his career and take the Championship Title by five points.

Lorenzo started from pole after his perfect lap during yesterdays' qualifying and delivered the same standard today. He had a perfect start to take the hole shot with Repsol Honda's Marc Marquez and Dani Pedrosa following.

Lapping consistent mid 1'31s for most of the race, the Spaniard slowly built a gap of over 0.7s to his closest rival, but as the race progressed towards the midway stage, Marquez was able to win some time and slowly inched closer.

Suddenly the atmosphere changed as the possible outcome of the race became wide open again, however Lorenzo remained unshaken. Despite pressure from Marquez, and Pedrosa who started to close in with seven laps remaining, he rode like a true champion, not allowing his compatriots to make him lose his concentration for even a second.

There was close to nothing between the current and the soon to be World Champion, but still Lorenzo managed to hold his rival off. As Pedrosa had a second wind, he and Marquez started to fight amongst themselves. This was all Lorenzo needed to break away for a second time. Immediately acting on the situation he pulled away slightly while going into the final lap. 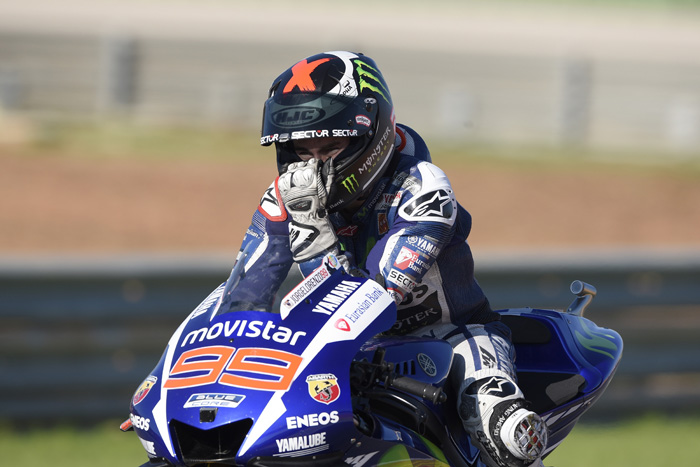 Jorge Lorenzo comes to the realisation he has won the 2015 World Title - Credit: Yamaha
Marquez and Pedrosa were still following his every move, but the Yamaha rider's pace was too fast for them to make an impression before Lorenzo crossed the line for a final time with a 0.263s advantage.

"There was a lot of pressure, especially at the end of the race, because I had been pushing all the time and I was quite tired from pushing so much." Lorenzo commented after sealing his fifth world championship.

"Dani recovered so much time and so many metres. He was at 0.5s at the middle of the race and he recovered everything, so I knew I had two riders behind me and that, if they overtook me, I would lose the championship, so it was a very difficult situation.

"I also felt that the right side of the tyre was destroyed, I was moving so much and I had to go very slowly entering right corners, so I couldn't keep the 1'31-high up and it became 1'32-low. I also couldn't see the pit board or how many laps there were left to the end. On the last lap I passed the last corner and saw the chequered flag and I couldn't believe that I won the race and the championship in the last moment.

"It's such a relaxing and enjoyable moment. I was crying on the honour lap, it's such a fantastic day for us. I equal Wayne Rainey, I equal Kenny Roberts Sr, I equal Ayrton Senna in the motorsport world with these three premier class World Titles, it's unbelievable! We have to enjoy this day, this week, because you can't often live this emotion.

"I've ridden with Valentino, Marc, Casey and Dani on the track." Lorenzo continued. "For me these are the best riders in the 21st century. The first championship title is the first one and thus very special, but to be in the championship with these four legends on track was very important to me.

"I was giving everything I have, the rhythm was very low, but I didn't give up. I knew the importance to put everything on the track and I did, like with yesterday's pole position." 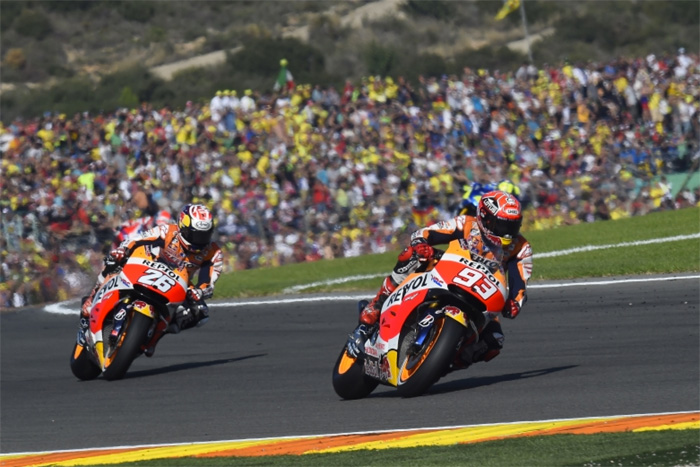 Marc Marquez never really challenged Lorenzo for the win and had to hold off his team-mate in the closing stages at Valencia - Credit: Honda
Marquez crossed the line in second position as was happy to end his second on a high.

‰ÛÏIt was a very difficult race." Marquez admitted. "I came out focused, as usual, and initially Jorge pushed strongly.

"I found it hard to follow him, and at that time Dani was two seconds off us. There were a few laps in which I was really on the limit, forcing the front tyre - which moved around a lot.

"With about six laps to go, I felt that we could win because I had caught up to Jorge. I did not expect Dani to come through so quickly, and when he passed me he ran wide.

"I used that to pass him back but Jorge had escaped by half a second making it impossible to recover the gap, even though I rode the last lap and the entire race at 100%.‰Û 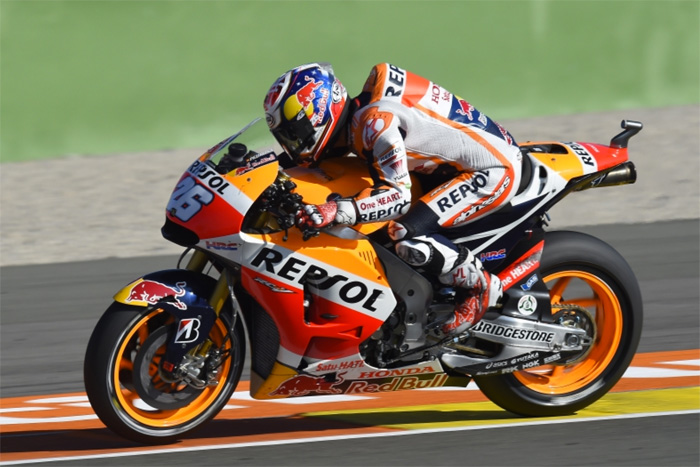 ‰ÛÏI‰Ûªm very happy and I enjoyed the race ‰ÛÒ especially in the final part!" Pedrosa commented. "I was a little bit distant from the battle in third. I couldn't find the way to go faster because I had problems when braking and cornering; it's been hard for us to find a good setup for the bike this weekend and I was able to be up at the front but without a good feeling.

"During the race I tried to counter this, but it was difficult. In the end I found the way to be faster and I was able to ride better and recover ground. When I caught up I saw that there were two laps remaining and I tried to attack, but when I overtook Marc I ran wide and he returned the pass.

"I am happy because what I can take from here ‰ÛÒ as well as the third place in the race and fourth in the Championship ‰ÛÒ is the attitude and the progress we have made in the final part of the season. We‰Ûªve been very strong and I hope that we can continue that this winter and next year.‰Û 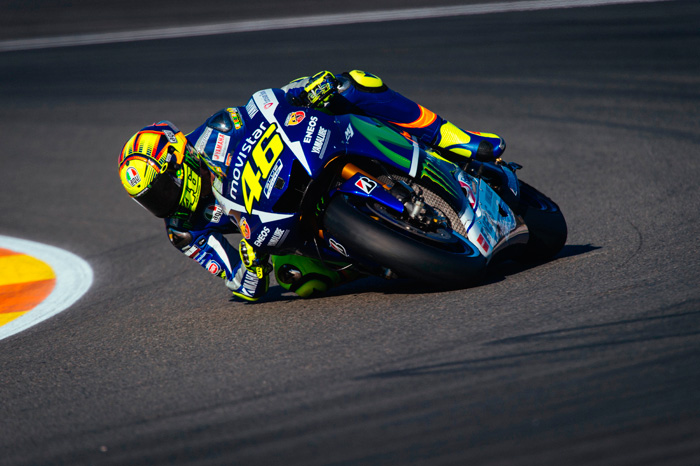 Valentino Rossi Put in a sensational ride to cut through the pack but was left to lament what might have been at race end - Credit: Yamaha
Rossi crossed the line in fourth position and for only the first time in 2015 found himself no leading the MotoGP championship at a time when it mattered the most.

It was a brave ride from the nine time world champion who quickly made his way from last on the grid into fourth position. However the leaders were to far gone by the time Rossi made it into fourth, and he was never going to be able to brige the 12 second gap back to the leading trio.

"We built this season from the first race and it was a great season, I was always competitive and I never made any mistakes." Rossi refelected. "I thought after Motegi that I had the potential to win the championship, but unfortunately from the race at Phillip Island something changed."

The Monster Yamaha Tech3 pairing of Pol Espargaro and Bradley Smith crossed the line in 5th and 6th positions respectivley, with Andrwa Dovizioso in in 7th. Aleix Espargaro gave the Suzuki team a positive end to their return season in MotoGP with a 8th place finish. Cal Crutchlow ended his season with a ninth place finish for the LCR Honda team, while Danilo Petrucci rouned out the top ten for Ducati.

Australia's Jack Miller finished down in 21st position, one spot ahead of Anthony West in 22nd for the AB Motoracing team. 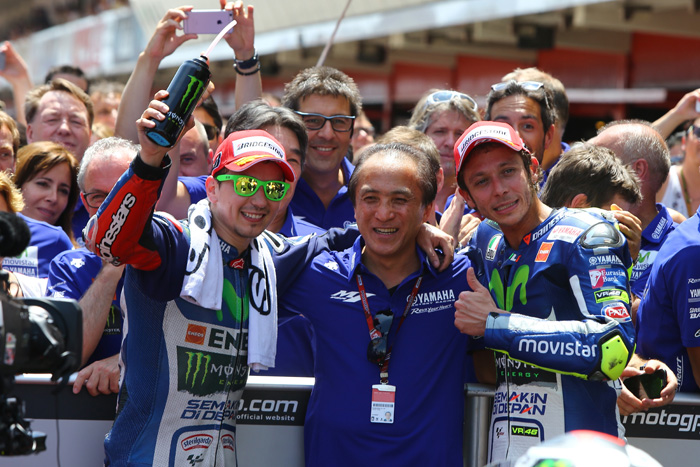