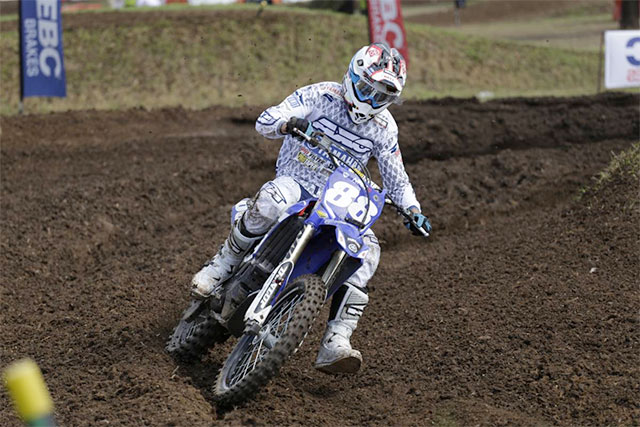 The Pirelli MXD class fought to the bitter end at Round 2 of the Motul MX Nationals at Appin in New South Wales today, with Yamalube Yamaha Racing Team‰Ûªs Jordan Hill finishing on the top step at the conclusion of the round.

When the Pirelli MXD class hit the technical Appin circuit this morning, competitors were handed 25 minutes for practice and qualifying. Hill emerging as the man to beat at the conclusion of the qualifying session, posting a 1:47.313 lap time that simply couldn‰Ûªt be matched by his fellow Under 19‰Ûªs competitors. Taking second pick of the grid was his teammate Mitch Evans, whilst championship leader Husqvarna's Connor Tierney was forced to settle for third pick of the Pirelli MXD grid.

After a quick sighting lap, it was game on in moto one for the Pirelli MXD class, Hill getting the jump out of the gate, to take the first hole shot of the day, and move in to the race lead.

After one lap, it was Hill and his Yamalube Yamaha teammate Evans, who held down positions one and two, while red plate holder Tierney found his way in to third position. But after two laps Evans executed a friendly pass on Hill, taking control of moto one.

With the top three then checking out on the field, and pulling a gap of more than five seconds on fourth position, the attention was well and truly on the trio out in front. And it wasn‰Ûªt long before fans were treated, with Tierney lining up Hill for a pass for second place, which he successfully executed, then began his mission to chase down Evans.

By the half way point in the 20 minute first moto, the running order saw Evans continuing to maintain the race lead, Tierney settled in to second place, while Hill remained in third position. Justin Hart was the next rider back from the front three, in fourth, while youngster Cooper Pozniak rounded out the top five. Barham, Raceline Pirelli KTM‰Ûªs Wade Kirkland, Zak Small, Lochie Latimer and Jimmy Griffin rounded out the top ten in the standings at the half way mark.

With four minutes to go, there was no change to the standings ‰ÛÒ all riders settling in to their respective positions, and Evan‰Ûªs putting himself in the box seat to take the moto one victory.

So when the chequered flag flew, Evans had plenty of reason to celebrate, taking the moto one win, ahead of Tierney in second, and teammate Hill who finished in third.

Hart managed to hold on throughout the 20 minutes to take fourth position at the conclusion of the moto, while Pozniak finished in an impressive fifth place.

When the second and final race for the Pirelli MXD class kicked off, it took no time at all for red plate holder Tierney to find his way to the front of the pack, followed by Hill in second, while Kirkland looked to redeem himself after a tough first moto and held down third.

Hill‰Ûªs teammate Evans was a notable absentee from pointy end of the field, after crashing in the opening stages of the moto, and was then forced to fight through the pack.

By the halfway mark, there were familiar faces continuing to grace the front of the group, Hill managing to move in to the race lead, relegating Tierney to second, while Kirkland continued to circulate in third position.

Evans, who was determined not to let the front three out of his sights, was fighting hard in fourth to make up positions, while Pozniak rounded out the top five with five minutes in the moto remaining.

When the last lap board was shown, Hill was well set up to take the win ahead of Tierney, and despite a moment from Tierney on the final lap, the standings remained unchanged when the chequered flag flew - Hill crossing the line to collect the moto two race win, followed by Tierney in second, and Kirkland in third.

When points were tallied, Hill‰Ûªs win in the final moto was all that was required to secure the round victory, ahead of Husqvarna mounted Tierney who managed to retain the Pirelli MXD red plate, and finish round two in second, while Evans completed the podium in third.

‰ÛÏI‰Ûªm so happy to get the round win here at Appin, this is a home round for me so I‰Ûªve got all of my family and friends here, which it makes it even more special,‰Û