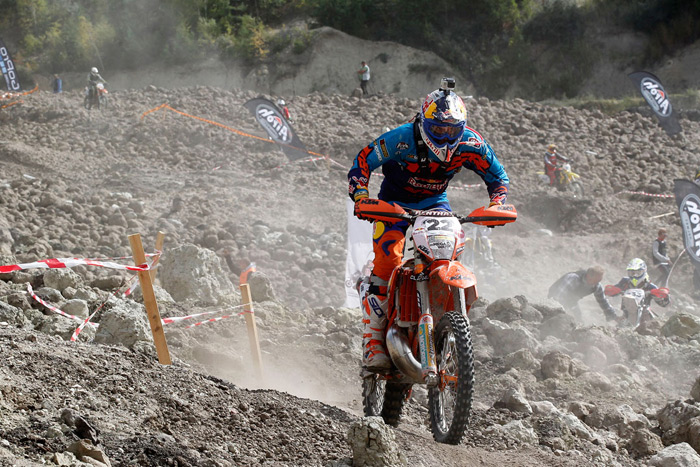 Powering his KTM to fourth in the qualifying prologue, Jonny went on to top the Megawatt race ahead of countryman Graham Jarvis with Swede Joakim Ljunggren third.

Not quite able to lead from the first corner, Jonny initially settled into second behind fast starting Joakim Ljunggren before hitting the front and soon after hitting the dirt. Falling from the lead to third, Jonny worked his way back into the first placed spot shortly before stopping for fuel.

Once back out front he opened up a small but important advantage and completed the second half of the race without mistakes. Going on to claim the chequered flag three minutes ahead of Jarvis, Walker continues his unbeaten run in major extreme enduro races in 2015.

‰ÛÏI‰Ûªm made up with the win ‰ÛÒ it‰Ûªs exactly the result I was aiming for." Walker commented. "After finishing second last year I really wanted to win badly today.

"To be honest I can‰Ûªt really fault my race too much. I got a decent start and tucked in behind Joakim on the first lap. But it was so dusty, so I made a big effort to pass him and get into the lead.

"Shortly afterwards I crashed and dropped three places. Pushing hard to regroup I got back into the lead before the first refuel point starting lap two. After that I just tried to ride my own race, avoid trouble and took the win.‰Û