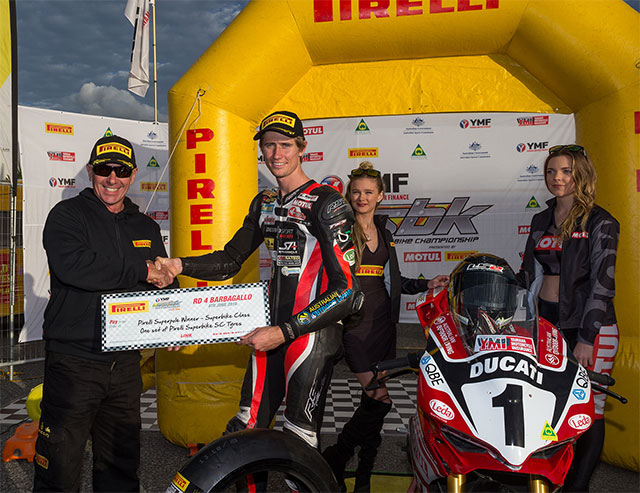 Despite a small amount of rain overnight, by the time the Motul Supersport and YMI Superbikes hit the track today, conditions were dry, and with a handful of local stars as well as championships on the line, the competition was fierce with all riders vying for pole position.

When Qualifying 1 got underway for the YMI Superbikes this afternoon, the Yamaha Racing Team bikes were notable absentees from the field - yesterday‰Ûªs fastest rider Glenn Allerton, and Cru Halliday both opting to take time to observe before joining the session.

Jon Daniels Racing‰Ûªs Daniel Falzon was impressive early on, posting a time of 55:876 handing him the top spot periodically, but it only took four laps for Yamaha‰Ûªs Wayne Maxwell to assert his authority, snatching up P1 with a 55:709 lap time, relegating Falzon to second.

With 12 minutes remaining in the session, it was Yamaha domination at the front, with the manufacturer holding positions 1,2,3, and 4. Maxwell maintained his fastest time from Falzon (55.784), while Halliday put down a 55.863 placing him in third. Allerton, after only a single lap was fourth quickest on the circuit with a 55:899, followed by Crankt Protein Honda Racing‰Ûªs Troy Herfoss who was only slightly off the pace in fifth with a 55:929.

At the conclusion of Qualifying 1, the only change came from Allerton who shot from fourth to second qualifying position (55.778), only 0.069 seconds behind teammate Maxwell who was fastest on track (55.709). Yamaha‰Ûªs Falzon wrapped up Qualifying 1 in an impressive third, while Halliday and Herfoss completed the top five times.

In the second qualifying session for the Superbikes, it took a lengthy ten laps for Yamaha Racing Team‰Ûªs Allerton to better Maxwell‰Ûªs Qualifying 1 time from this morning. Allerton managing to take the top spot and beat the 2005 ‰Û÷best lap‰Ûª record with a flying 55.341 time.

DesmoSport Ducati‰Ûªs Jones was the only other rider at the front to improve on his time from this morning, posting a 55.763 slotting him in to second in Qualifying 2, while Yamaha Racing Team‰Ûªs Maxwell settled for third with a 55.796.

With the second qualifying session wrapped up, and times from both sessions combined, there were a total of four Yamaha machines occupying the top five positions ‰ÛÒ Allerton quickest from Maxwell, Jones, Falzon, and Halliday, while Honda mounted Herfoss was the final rider in sixth position to progress through to Pirelli Superpole later in the afternoon.

When Pirelli Superpole kicked off, riders had a total of ten minutes to lay down their fastest laps, and the Superbikes did well to entertain the crowds ‰ÛÒ chopping and changing times and smashing lap records to boot.

After only three laps DesmoSport Ducati‰Ûªs Jones proved why he‰Ûªs the defending ASBK champ, smashing Allerton‰Ûªs newly set ‰Û÷best lap‰Ûª record with a 55.029, and securing his first Pirelli Superpole Award for the year.

Maxwell wrapped up the final appearance for the Superbikes today in second (55.159), followed by teammate Allerton who wrapped up Superpole in third (55.405). Crankt Protein Honda Racing‰Ûªs Herfoss finished in fourth (55.455) followed by Falzon and Halliday who took fifth and sixth places respectively.

Jones will now start from pole position when racing kicks off for the Yamaha Motorcycle Insurance Superbikes tomorrow, and shared his thoughts immediately after collecting his Pirelli Superpole award.

‰ÛÏObviously it‰Ûªs fantastic to come back here in 2016 and race at Barbagallo Raceway - this time with the DesmoSport Ducati Team and the Ducati is working awesome. I am looking forward to getting into the racing now,‰Û