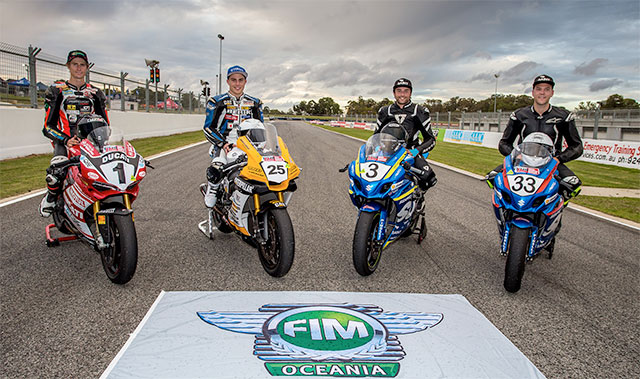 As a sign of the continuing strengthening of road racing championships on both sides of the Tasman, and the relationship between Motorcycling Australia and Motorcycling New Zealand, the FIM Oceania board have brought forth the 2016 FIM Oceania Road Racing Championship which will kick off at Morgan Park Raceway on August 5-7.

The 2016 FIM Oceania Road Racing Championship will run alongside the two remaining rounds of the 2016 Yamaha Motor Finance Australian Superbike Championship presented by Motul Pirelli, and will see representatives from both countries compete for the FIM Oceania Championship for their respective countries.

DesmoSport Ducati pilot Mike Jones and Jon Daniels Racing Daniel Falzon will go head to head with New Zealand‰Ûªs Sloan Frost and Ryan Hampton on August 5-7, at round five of the ASBK, with all four riders not only looking to defend their positions in the ASBK Championship but to compete for their country.

Falzon, last year represented Team Australia against New Zealand‰Ûªs Hampton, and managed to claim victory for his country. Today Falzon spoke about the honour of representing Australia for the second consecutive year.

‰ÛÏIt‰Ûªs a great honour to be once again representing Australia in the FIM Oceania Challenge,‰Û