Jones and Elliott Impress As Practice Gets Underway At Barbagallo 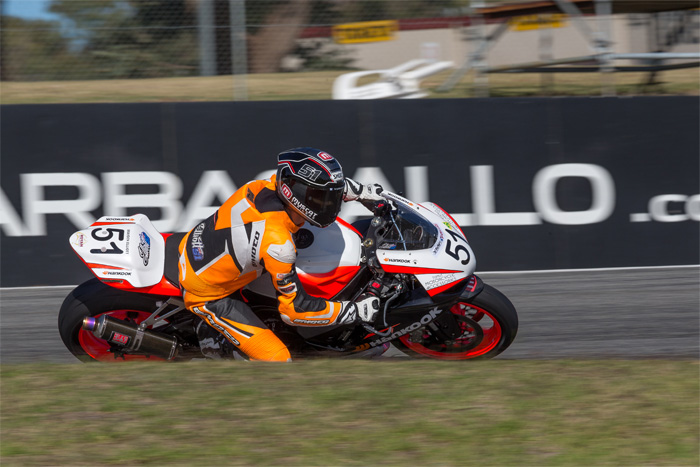 Series leaders Mike Jones (Superbikes) and Brayden Elliott (Supersport) have signaled their intentions during practice at the opening day of the third round of the 2015 Yamaha Motor Finance Australian Superbike Championship presented by Motul Pirelli.

Beautiful weather greeted teams and riders for the opening day of practice at Barbagallo Raceway in Western Australia, and Friday was the first opportunity for riders to test their machinery on the 2.41km circuit.

In the opening practice session for the class, it was the duo from Australian Outdoor Living‰Ûªs Cube Racing Team of Ben Henry and Jones who set the fastest times.

Henry highlighted his significant Barbagallo knowledge with the fastest lap time of 57.417, while series leader Jones was not far behind with a 57.612.

Daniel Falzon (Caterpillar / JD Racing) was a noticeable absentee from the second practice session where Jones posted the fasted time of 56.878 ahead of Henry (56.976).

The Stronach brothers again sat behind them in third and fourth, while Anthony McFadden (Steve‰Ûªs Motorcycles) rounded out the top five with a 57.823.

The final session produced much of the same with Jones again taking top honours with a fastest time of 56.708.

Teammate Henry ended an impressive day with his best time of 57.066, while McFadden, Falzon and Ben Stronach all came in under 58 seconds.

Round 2 winner and series leader Elliott (Brayden Elliott Racing) got the start he was after in WA, posting a time of 59.274 to clock the fastest time of the opening practice session.

Elliott left it until his 19th and final lap of the second session to post the fastest time ‰ÛÒ his 58.409 enough to relegate Zampieri (58.450) into second.

Van Vuuren and Alex Phillis rounded out the top five.

In session two it was Queenslander Brian Houghton (K1 Racing) showing how it‰Ûªs done, with a quick 1:03.379 ahead of Petit, Tom Bramich (Ron Angel Classic Racing), Barton and Collins.

The final session once again saw quicker lap times set, and it was Barton who signaled his intention for the weekend with a number of sub 1:04.00 times throughout.

His fastest lap of 1:03.324 was the quickest of the day, while Locky Taylor (Tas Earthmoving WA), Houghton and Collins all came inside the 1:04.00-mark.

Hayden Spinks clocked the best time in the opening session of all classes on the day with a 1:10.987 ahead of one of the overall class favourites in Drew Sells (Race Centre).

The second session saw round 2 winner Michelle Marais (SP Racing) back in action, and she didn‰Ûªt disappoint posting the fastest time of 1:10.209 for the session.

Sells, Spinks, Hall and Lara Marais rounded out the top five ‰ÛÒ with all riders (other than Spinks) improving on their times from the opening session.

In the third and final practice session Michelle Marais produced had the goods, posting the first sub 1:10.00 time for the class with a 1:09.487.

Spinks and Sells also came in under the 1:10.00-mark to pst the second and third fastest times of the session, with Hall and Keogh claiming fourth and fifth fastest times respectively.

Round three will provide spectators with plenty to see and do ‰ÛÒ outside of the racing.

Off the track there will be trade and club displays to check out, as well as a kids Come & Try area which is free for children to have a go riding mini bikes in a safe and controlled environment.

Stunt rider Lukey Luke will be out in force to show off his latest tricks on the bike, and pillion rides will be taking place for a number of lucky competition winners (see our Facebook page for your chance to win a ride!).