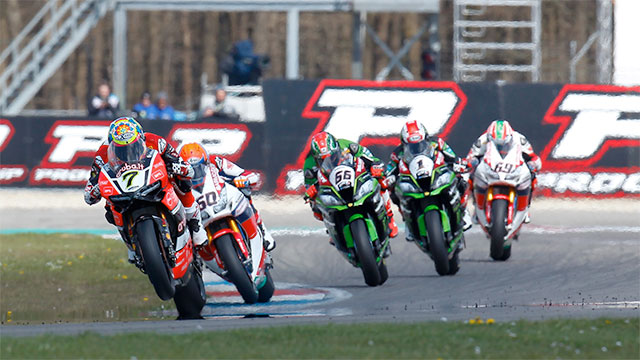 Kawasaki rider Jonathan Rea has won Race 1 at the TT Circuit Assen as he cements his place as second most successful rider at the Dutch track.

Chaz Davies took a well-fought P2, and Honda rider and MotoGP Legend Nicky Hayden got to the WorldSBK podium for the first time.

After a great start for the front row, Tom Sykes lead from pole and was followed off the line by KRT teammate Jonathan Rea as both Kawasakis took off in the lead of the race. After a mistake by Sykes, Rea then passed the pole-sitter as the Ducati of Chaz Davies fought to catch the two, eventually getting past both as the lead group started to concertina.

Sykes was the first of the frontrunners to falter as the Kawasaki rider lost the front into Turn 16, crashing out of the race but escaping unharmed. The group of Rea, Davies, van der Mark and Hayden was left out front in the race, with the Welshman heading the group.

Marc Van der Mark, Davies and Rea fought for the lead in a spectacular showcase of WorldSBK, before the Dutchman sadly pushed too hard and lost the front end of his Honda, sliding out and leaving his rivals to a duel won by Rea. Honda teammate Nicky Hayden, after playing a patient game in 4th, earnt his way to his first podium in World Superbike with a ride that shows he know has the measure of the Honda, and the Pirelli tyre. 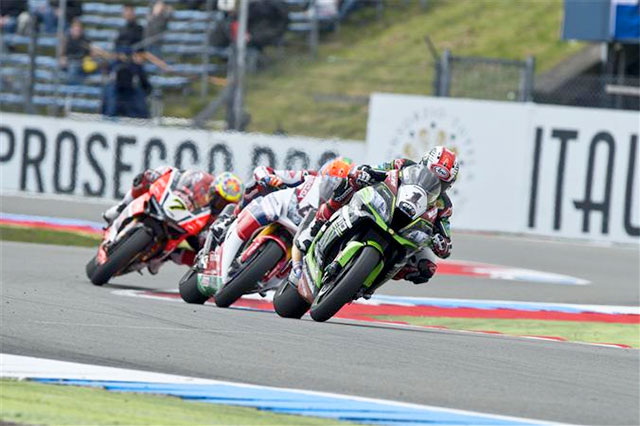 After a close race long battle Jonathan Rea was at the front at the right time,
"It was great to win another Assen race. Our bike set-up was new because we changed the bike just for the race after warm-up. I put my head down with a few laps to go," Rea said after the race.

"It is really hard to lead but I was so-so happy because I feel we have been a bit on the back foot now since Aragon and before so to score 25 points here is great. I think the potential of this bike is huge but I have yet to get it into a really good window I am comfortable with.

"This race has given us a lot of information and to score 25 points when it really matters is incredible for me, for my strength inside, and for my championship. I want to thank all the Dutch fans because they give me a great reception every time we come here and thanks to my team for their hard work and keeping my spirits up. After Aragon I felt we were a bit deep in the sea and now I feel our heads are above water," Rea concluded.

MV Agusta recovered from disappointment in AragÌ_n as Leon Camier fought his way back from being denied entry to Superpole 2 by finishing in the Top 5 in an incredible fourth; a great haul of points and show of pace from the Italian factory and a well deserved reward for the hard work put in by team and rider. 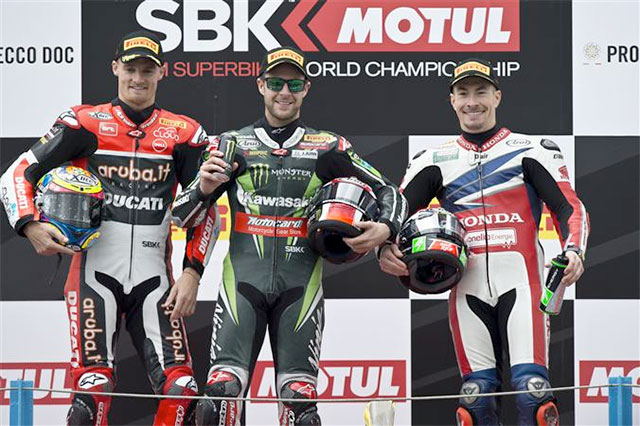 (L to R) Chaz Davies, Jonathan Rea, and Nicky Hayden who made his way to the podium for the first time in WSBK.
Pata Yamaha pairing Sylvain Guintoli and Alex Lowes suffered mixed fortunes in Superpole and in Race 1, with the number 50 Yamaha of Guintoli starting from the front row and unfortunately ending his first Race in the Netherlands too early with a trip to the gravel. Teammate Lowes fought back from a crash in Superpole 2 to run in the top 6 before ending his race in eighth.

BMW riders Markus Reiterberger and Jordi Torres, after graduating from Superpole 1, both ran close together in the top ten until Reiterberger ran off track, leaving teammate Torres to take another top 5 finish as the flag fell, with the German recovering to an impressive 7th, just behind lead Aprilia Lorenzo Savadori. Savadori recorded his best career result to date by coming home P6 as the Noale factory continue to improve and the reigning STK1000 Cup winner continues to impress, and the Kawasakis of Roman Ramos and Lucas Mahias, replacing Sylvain Barrier, closed out a top ten in which every manufacturer was represented.

Australian's Josh Brooks finished 53 seconds of the winner in 11th while Josh Hook finished a lap down in 16th place.

WorldSBK will be racing once again on Sunday at 13:00 local time (GMT +2), as van der Mark endeavours to take the same pace to the end of the race, and Rea aims for another double.

Main Photo: Chaz Davies (7) had his time at the front but Rea would come through