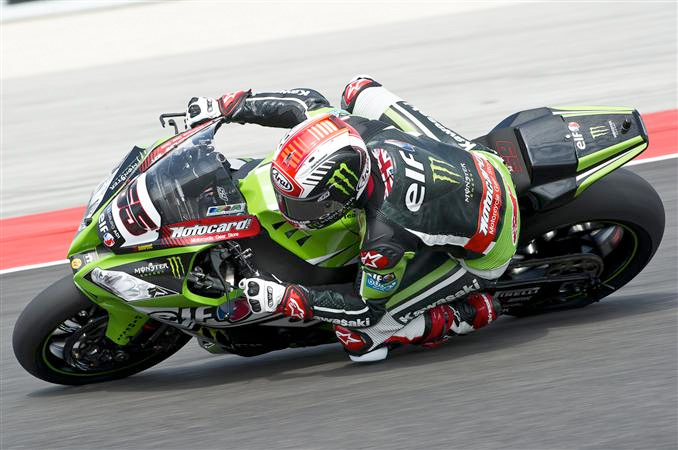 With the second half of the 2015 FIM Superbike World Championship season well underway Jonathan Rea and Tom Sykes will now face two ‰Û÷long-haul‰Ûª rounds in succession, beginning with the Laguna Seca weekend between 17th and 19th July.

So far KRT riders have won the great majority of the races, having secured 14 of the 16 possible victories since the start of the year. Championship leader Jonathan Rea has taken 11 of those wins, with his team-mate Tom Sykes having secured three.

Since Laguna Seca returned to the WorldSBK calendar in 2013 Sykes has taken two race victories for Kawasaki at the 3.610km circuit near the town of Monterey in California. Rea was forced to miss the first return to Laguna in 2013 through injury but last year he learned the circuit well enough in his first visit to record a third place in race two.

In the current championship Rea has a total of 375 points and Sykes is in second place on 242 points. Kawasaki has 390 points in the Manufacturers‰Ûª Championship and a healthy 122-point lead overall.

‰ÛÏI am ready to get back into it because three weeks off is quite a lot." Rea commented. "I want to keep going, not just to carry the momentum but also because I enjoy my time at the track.

"I miss hanging out with my team and riding my bike because I am really enjoying being at the track this year. I wish we had a lot more race weekends than just 13. We have had an amazing start and have a good thing going.

"We want to continue that and achieve better things. I want to win as many races as possible in the year. From pre-season testing onwards our goal has been to win the championship and now, just after the halfway stage, we are in a good position.

"I have only ever raced at Laguna once because I was injured when the championship went there two years ago. With one year more experience there I hope we can do a good job. I was on the podium in race two last year and, in the paddock show after the race, it was nuts!‰Û