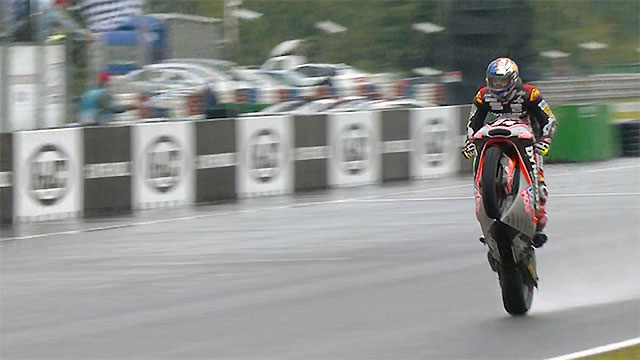 Dynavolt Intact GP rider Jonas Folger has taken an incredible Moto2 win in torrential conditions at the Automotodrom Brno, taking his first win in more than a year.

Alex Rins (Paginas Amarillas HP 40) and Sam Lowes (Gresini Racing Moto2) completed the podium in sencond and third respectively, both taking a chunk out of championship leader Johann Zarco‰Ûªs (Ajo Motorsport) lead as the title defender crossed the line in only eleventh place.

Folger took the lead by sweeping round the outside into Turn 1, and the German was simply unstoppable for the rest of the race. With one small wobble the only drama for the German, he managed the gap to perfection to cross the line for his first win in 2016 ahead of his graduation to MotoGP next season.

Alex Rins had a stunning turnaround in the wet on race day, as the Spaniard took a solid second after having struggled so much more in the dry in Brno. The ride to the podium cut the gap to title leader Zarco by 15 points, keeping the championship in the balance in the second half of the season.

Sam Lowes also benefitted from the wet in Brno, as the Brit impressed with a calm ride to complete the podium. With Zarco having such a difficult day at the office, Lowes was able to capitalize along with Rins to keep his title hopes alive.

There was drama on the final lap as Sandro Cortese (Dynavolt Intact GP) and Mattia Pasini (Italtrans Racing Team) collided, with Cortese unable to collect his top 5 finish after an impressive ride through the field and Pasini crossing the line in fourth.

Alex Marquez (Estrella Galicia 0,0 Marc VDS) had a fantastic ride into fifth, as the Spaniard converted his front row start into a top five finish. Marquez, who slotted through Turn 1 impressively on the inside, fought with the front before choosing a solid finish at the flag, calm under pressure as he rebuilds his confidence with another top result. Hafizh Syahrin (Petronas Raceline Malaysia) made good on his nickname of ‰ÛÏthe Fish‰Û 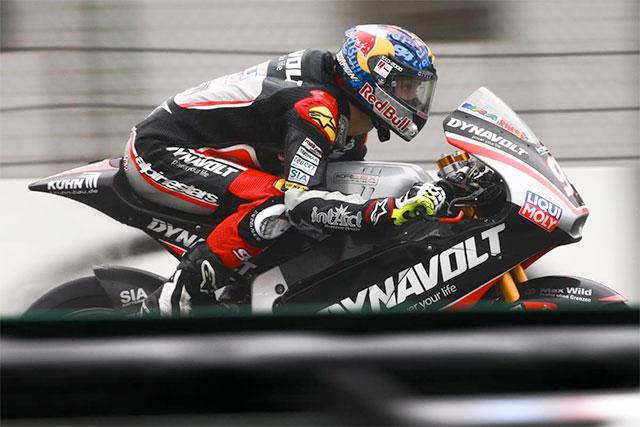 Jonas Folger
Franco Morbidelli (Estrella Galicia 0,0 Marc VDS) crossed the line in eighth after taking less risks that those that saw him crash out of contention in the wet German GP, with the second Leopard Racing machine of Miguel Oliveira crossing the line in ninth.

The man in tenth place was Anthony West (Montaze Broz Racing Team), who took his 3-year old Suter chassis from last place on the grid into the top ten - as a wildcard ‰ÛÒ in one of the most stunning displays of the day.

Moto2 now head to the UK for the next Round, with Silverstone ready to fire up the engines on the 4th September.