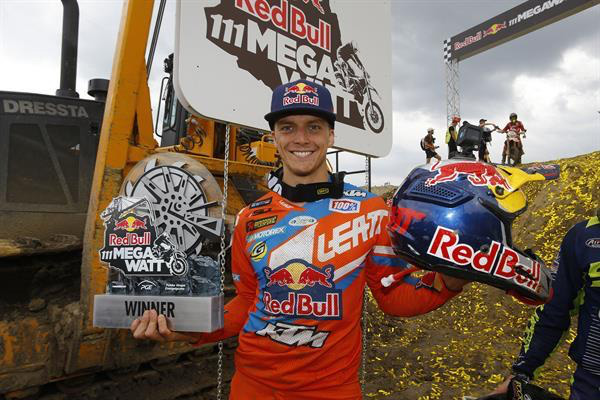 Walker was favourite to take top honours this year despite stiff competition from the hard enduro regulars including his team-mate and Erzberg winner Alfredo Gomez, who went on to place fourth and secure his best ever result at the event.

Topping Saturday‰Ûªs Prologue, Jonny Walker showed he was ready to add to his previous Megawatt victories at what has become one of his favourite events on the hard enduro calendar. It wasn‰Ûªt plain sailing for the Brit however, as a couple of issues slowed his pace towards the end of the race allowing his rivals to close to within almost striking distance near to the finish.

From the start it was KTM mounted Paul Bolton who initially lead. Walker was hot on his heels and the lead changed numerous times before Walker managed to break away from the following pack. Walker built up a commanding two-minute lead after two laps, only for his advantage to be reduced to virtually nothing at the climax of the race.

‰ÛÏGetting a third Red Bull Megawatt win feels amazing, it certainly helps put the disappointment of Romaniacs and Erzberg behind me." Walker stated. "It was a lot closer at the finish than I wanted, but a win is a win so I‰Ûªm really pleased I was standing on top of the podium.

‰ÛÏI had an issue with my rear mousse on the final lap, so I couldn't push like I wanted to but half way around the final lap I had more than a one-minute lead. I knew I was going to get caught and I got a little nervous right before the finish, but things worked out good in the end. Thankfully I managed to get through the final rock section and across the finish line ahead of Mario. Megawatt‰Ûªs been good to me in recent years so to get a third win here is awesome.‰Û