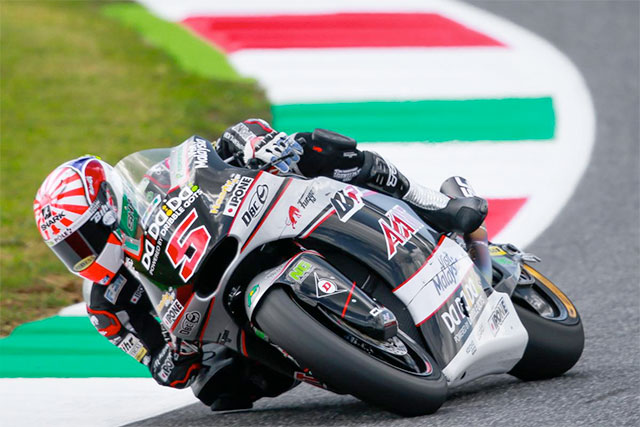 Ideal conditions continued in Mugello, Italy, as preparations for the Gran Premio d‰ÛªItalia TIM began in the Moto2 class.

The track kept getting hotter, ground temperature at 42å¡C as Sam Lowes (Federal Oil Gresini Moto2) rolled into pole position on the grid. 31 Moto2 riders lurched forward for the 21-lap race, Tom Luthi (Garage Plus Interwetten) and Lorenzo Baldassarri (Forward Team) leading into the first corner but coming into contact and dropping back. By the exit of Savelli, Lowes was back in the lead with Takaaki Nakagami (Idemitsu Honda Team Asia) trying to fend of Baldassarri.

Having crashed out of the previous two races while challenging for a potential podium, Baldassarri remained hyper aggressive in second. Meanwhile Alex Rins (Paginas Amarillas HP 40) made his way into the top five from ninth on the grid.

Alex Marquez (Estrella Galicia 0,0 Marc VDS) and Luca Marini (Forward Racing) were involved in an incident together on the third lap at Turn 3, ending their races. It was an equally difficult race for Jonas Folger (Dynavolt Intact GP) who pulled into the pits with technical issues.

After his early contact with Baldassarri, Luthi was able to compose himself and slid into the lead on the fourth lap. A clear five-rider group was now streaking away at the front. 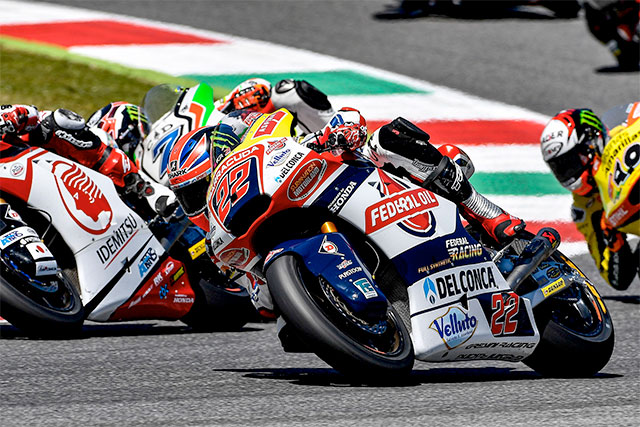 Third was enough to give Sam Lowes (22) a 2 point lead in the championship after Alex Rins was forced to start from the rear of the grid and could only get back to 7th.
Xavier Vierge (Tech 3 Racing) lost the front at Turn 13, his bike hitting the air fence and brought out the red flag due to safety conditions. All air fences must be inflated for racing to run, safety paramount in the World Championship.

The race was eventually restarted and set to be 10 laps, the grid decided based on the position of riders on the third lap. As such Lowes lined up on pole ahead of Luthi and Nakagami after the quick restart procedure. But Nakagami, Julian Simon (QMMF Racing Team), Xavier Simeon (QMMF Racing Team), Simone Corsi (Speed Up Racing), Ratthapark Wilairot (Idemitsu Honda Team Asia), Edgar Pons (Paginas Amarillas HP 40), Federico Fuligni (Team Ciatti) and championship leader Alex Rins (Paginas Amarillas HP 40) were all sent to the back of the grid for delaying the race restart.

Xavier Simeon crashed on the formation lap and was therefore unable to restart the race, even from the back of the grid.

Tom Luthi was fastest off the line in the restart, Lowes getting shuffled down the order as Hafizh Syahrin (Petronas Raceline Malaysia) shot into third. Baldassarri was again a man on a mission as the Italian moved into the lead. Lowes remained at the back of the leading five riders, Zarco just ahead of him.

The shortened race produced thrilling action as tyre wear was of no concern, Baldassarri, Zarco and Luthi battling freely at the front. All the while Axel Pons (AGR Team) crept towards the leading group. Behind Rins made great progress through the field and was soon inside the points after his back of the grid start.

Zarco and Baldassarri gave each other no quarter, every open door quickly taken advantage of as the two danced around the 5.245kms of Mugello. It was between the pair as the final lap began, Baldassarri attacking into San Donato but Zarco responded. The Frenchman pushed to the limit to hold onto the lead, clinching victory by 0.030s from Baldassarri. Victory moves Zarco to third in the standings, reigniting his title defense.

The last lap also saw a great recovery from Sam Lowes, the Brit charging through on Luthi to take third place.

‰ÛÏI‰Ûªm happy for this third place, even though I‰Ûªm a bit disappointed because at the first start I was feeling very good and I could easily keep a good pace," Lowes said.

"We worked all weekend with the hard tyre for the race, so at the restart we decided to keep the same tyre used on the first start, but when we started the 10-lap race I had less grip than before. However, despite a bad start I was able to fight and pass Syahrin and Luthi, thus getting the podium. With a race on the full distance it would have been better, but after the difficulties of Le Mans is great to be competitive again: we have been fast and we fought, so I‰Ûªm happy‰Û