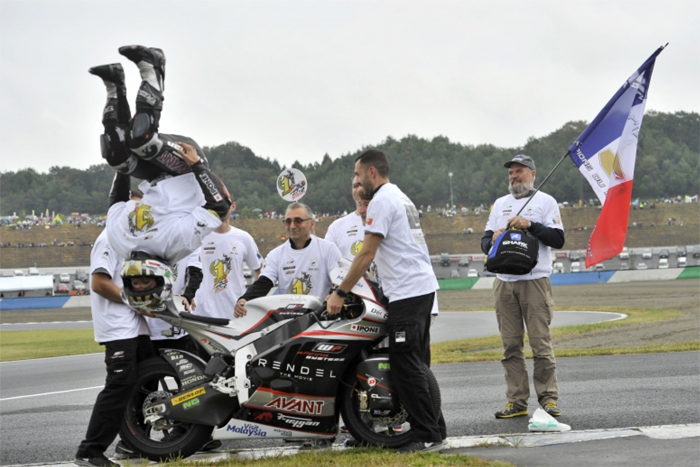 Two days after being crowned 2015 Moto2 World Champion, Johann Zarco (Ajo Motorsport Kalex) proved his talent once again today with his seventh victory of 2015 in the Honda CBR600-powered series.

The Frenchman was handed the title on Friday when his only challenger, 2015 champion Tito Rabat (Estrella Galicia 0,0 Marc VDS Kalex), withdrew from the Japanese Grand Prix due to the broken arm he sustained in a testing crash in Spain on Monday.

However, this was anything but an easy win for Zarco. The race ‰ÛÒ shortened from 23 laps to 15 due to a late start to the day caused by inclement weather ‰ÛÒ started on a damp track which claimed many victims. Zarco took the lead on the fifth lap from Jonas Folger (AGR Team Kalex) who gave chase but could never quite match the pace of the newly crowned champ. Finally the German crossed the line 4.5 seconds down.

With Zarco and Folger well ahead, the interest centred on a thrilling duel for the final place on the podium between former Moto3 champion Sandro Cortese (Dynavolt Intact GP Kalex) and Azlan Shah (Idemitsu Honda Team Asia Kalex). Cortese had been 11th on the first lap but he aggressively chased down his Malaysian rival, passing him on the penultimate lap. This was Cortese‰Ûªs first podium of the season.

‰ÛÏI won the title on Friday but I wanted to stay focused to do what I came here to do ‰ÛÒ to win." Zarco said. "The team worked hard to prepare for the race, then finally it was raining so they had to prepare the bike again for a wet track.

"Folger was strong. I wanted to follow him, then the track was drying so I felt I should go. It‰Ûªs safer that way. I had to keep my focus because I didn‰Ûªt want any mistakes. In wet conditions things can happen very suddenly." Zarco added.