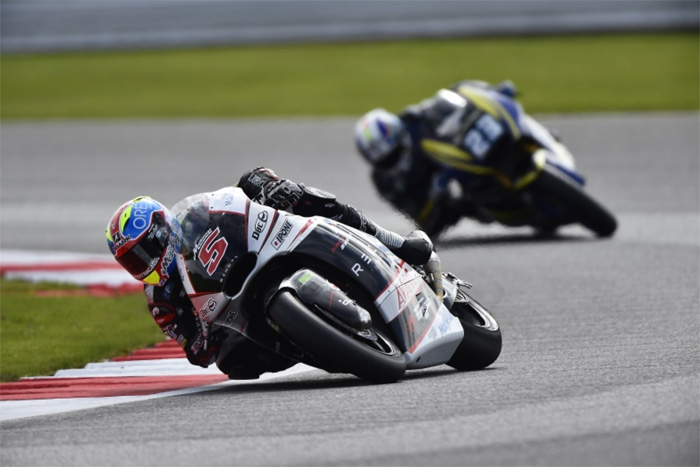 The all-Honda Moto2 race was the first of the day at the Silverstone, British MotoGP, and the riders acted as pioneers for the fickle weather that hit the circuit.

The race started wet, but before half the 18 laps were run the track had dried, and over-stressed wet weather tyres were already shedding chunks of rubber.

Zarco had bided his time and nursed his tyres in the early laps as top rookie Alex Rins (Paginas Amarillas HP 40 Kalex) held the lead, then moved past and immediately drew comfortably clear, taking a record 11th podium finish for the class.

Home race pole qualifier Sam Lowes (Speed Up Racing Speed Up) was swamped in the early laps, but fought back through for sixth, finally outpacing wet-weather specialist Anthony West (QMMF Racing Team Speed Up), the Australian‰Ûªs best finish of the season.

‰ÛÏIt has been a very positive weekend, with the learning we have done." Zarco said. "I had a crash on Friday and luckily I was not injured, but it taught me that you always have to be careful when you are fighting for the title, because the season is not over yet.

"Qualifying went pretty well, because even though I was not first, I was very fast. In the race we had very different conditions because of the rain, but I felt good. The goal was to finish the race, but when the track was drying out I felt more comfortable than the other riders.

"I saw that Rins was sliding a lot, so after eight laps I took the lead, tried to escape and it worked perfectly. Another 25 points is fantastic. I have to thank the team, because the tyres held up well and my feeling was perfect. Let‰Ûªs see if we can continue like this at Misano.‰Û