Johann Zarco Continues his Moto2 Dominance With Another Win 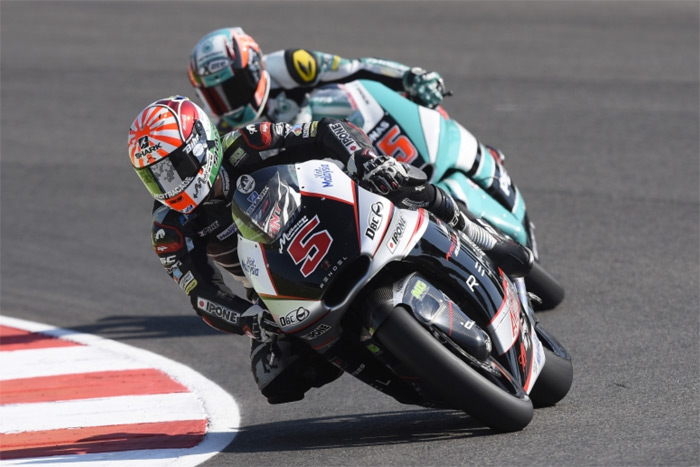 Johann Zarco takes his sixth win of the season from Tito Rabat and Takaaki Nakagami to extend his lead in the standings to 93 points after winning in Misano overnight.

Ajo Motorsport‰Ûªs Zarco took advantage of an early crash between Dominique Aegerter (Technomag Racing Interwetten) and Alex Rins (Paginas Amarillas HP 40) while they were battling for the lead to take his seventh career victory.

In the process Zarco equaled Oliver Jacque, Arnaud Vincent and Christian Sarron in the list of most successful French GP riders of all time. It also meant that Zarco recorded his 12th consecutive podium of the season and the Frenchman can now take the title at Motegi.

‰ÛÏIt was an odd race because the conditions changed so much from the rest of the weekend." Zarco commented. "This made us doubt which tyres to use. I finally chose the hard rubber, while Aegerter went out with the soft, so it was very easy for him to be strong at the front.

"The fact that Rins came into the fight with him helped me to concentrate on my riding, until both of them crashed. That allowed me to take the lead. I was able to relax and extending my lead, so I was in the perfect situation. However, I thought Tito [Rabat] could have reached me, because I was not feeling very fast. In the end he didn‰Ûªt.

"I want to thank the team for the great job we are doing. Tomorrow we have to continue to seek improvements in the test and head to Aragon in the best possible shape."

EG 0,0 Marc VDS‰Ûªs Tito Rabat recovered from an awful start that saw him drop down to 8th by the end of the first lap to claim his seventh podium of the season. In a race were tyre choice was crucial, Rabat joined Zarco and a number of other riders by opting for the harder rear while the medium seemed to drop off dramatically in the latter stages. Rabat eventually crossed the line 3.850s behind his title rival Zarco in second.

Idemitsu Honda Team Asia‰Ûªs Takaaki Nakagami (+5.388s) went for the medium rear and was struggling dramatically for grip at the end of the race. The Japanese rider managed to hold on to claim his first podium since Misano in 2013 and the sixth of his GP career.

Forward Racing‰Ûªs Corsi (+7.058s) crossed the line in fourth ahead of Julian Simon (+9.225s) on the QMMF Racing Speed Up bike. AGR Team‰Ûªs Jonas Folger also went for the medium rear tyre, and saw his podium challenge fade as the race went on. The German eventually crossed the line in sixth, 10.466s behind the race winner.

Rins took out Aegerter while challenging him for the lead on just the second lap. Both riders re-joined, but Rins was black flagged late on in the race after battling with riders while a lap down. Aegerter eventually recovered to finish in 24th.

Speed Up Racing‰Ûªs Sam Lowes was forced to retire from the race after a loose fairing rubbed against his rear tyre forcing it to delaminate.

It was announced before the race that Mika Kallio would be parting ways with the Italtrans Racing Team to join the QMMF Racing Team for 2016. Unfortunately for the 2014 Moto2‰ã¢ runner-up he then crashed out of the race at turn 8 on just the third lap. There were also crashes for Ricard Cardus, Robin Mulhauser, Alex Marquez, Jesko Raffin and Federico Caricasulo.