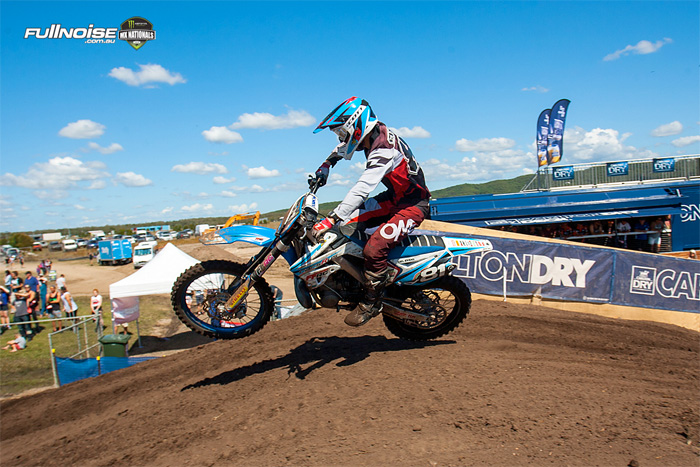 After 12 months on the sidelines, Joel Evans has confirmed that he will make his highly anticipated return to racing this weekend, when the fourth round of the Motul MX Nationals is held at Murray Bridge in South Australia.

Evans, who suffered a crash whilst racing at Murray Bridge 12 months ago which initially left him partially paralysed, beat the odds and not only walked again, but is now preparing to make a fairy tale comeback to the Motul MX2 class aboard his BBR Yamaha machine this Sunday.

WEM caught up with the determined Queenslander to hear exactly what it‰Ûªs taken to get to this point, and just how special it will feel for him to pull his helmet back on in South Australia.

You‰Ûªve just locked in a guest ride with the BBR Yamaha Racing Team after 12 months away from the MX Nationals recovering from your accident in 2015, tell us how the deal with the team came about?

I‰Ûªve been good friends with Nick Sutherland who rides with the BBR team for a pretty long time and Nick actually called me a while ago and asked if I wanted to go to Indonesia with him to race. He‰Ûªd been racing over there for a few years, and although I wasn‰Ûªt planning on racing I thought that I‰Ûªd go and give it a shot. Aaron Tanti ended up going over too so it was both boys from the BBR team, and they both spoke to their team manager about me and my story. Once we got home, Aaron unfortunately hurt himself and they were looking for someone to fill in and I think my name had been brought up. The team had seen that I had good pace in Indonesia so they thought why not just give me a go!

Had you planned to come back to the MX Nationals this soon?

I had always planned to come back from when I had made the decision to race again after recovering from my crash, but it wasn‰Ûªt going to be this year. I wasn‰Ûªt planning to come back to the MX Nationals until maybe 2017, but I think that I was hoping for the fairy tale of coming back and being really fast and doing really well, but to get to that speed I need to be racing at the Nationals and build myself up to that. This opportunity is going to give me the chance to come back and see where I fit in to start with.
Last year Murray Bridge was the toughest weekend of your life, at that point did you think that there was any chance you would be racing again, let alone in 12 months‰Ûª time?

Not at all. When I initially crashed I couldn‰Ûªt feel anything from my head down, and it‰Ûªs not like your brain lets you even think that you‰Ûªre going to race again when you can‰Ûªt even walk or move. At that stage, I didn‰Ûªt even know if I was going to walk again so I definitely didn‰Ûªt think that racing this weekend was ever going to be possible at all.

With your comeback round being the venue that you actually had your accident at, how special is it going to be to return to Murray Bridge to race this weekend?

A lot of people have actually asked me if I was going to be worried about going back or if it was going to effect me in a negative way, but for me it actually makes it more exciting. To go back and have the chance to face things head on at my first comeback MX Nationals race is sort of like the ideal situation. I‰Ûªm going to have a lot of friends and family coming to support me too which will be nice. I have always really enjoyed the track and I have no bad feelings towards it, It‰Ûªs just how things went there last year and I‰Ûªm excited about the race more than anything. I‰Ûªm keen to get back out there and have some fun.

For those who may not know, how long has the road to recovery been to get to where you are now?

Originally when I left the hospital I actually spoke to Racesafe a few months later and they told me that they thought I may not make it from the track to the hospital. And when I got to the hospital the day of my accident they told me that I probably would never walk again as well. I was in an induced coma for a week, and then after a few weeks I started to be able to feel my toes again, and other little things started coming back and then before long I was moving my legs and walking again. I was very different to a lot of cases in that I couldn‰Ûªt move my arms for a long time and that was the last thing that came back. I had to learn to walk again, and once my arms started to work I had to learn to feed myself which actually took the longest. It was a long road, but once I started making some progress I just became more and more determined. I remember even the first time I brushed my teeth, I was so excited. Given that not long ago it was such a huge achievement just to brush your teeth, how special is it going to be actually lining up and going racing with Australia‰Ûªs best this weekend?

I will definitely be smiling. It‰Ûªs something I‰Ûªve always wanted to do, and it‰Ûªs what I‰Ûªve always done. In hospital I didn‰Ûªt ever say it out loud because I think a lot of people would have thought that I was stupid, but returning to the MX Nationals was always my driving force. I wanted to come back and race at the top level, and it‰Ûªs what has pushed me along throughout these last 12 months. For that to happen, it‰Ûªs a dream come true for me.

Every racer has huge expectations of themselves but with 12 months away from the racing scene, what will you be content with result wise this weekend?

I‰Ûªd love to say a top ten, but I‰Ûªm being realistic and there‰Ûªs no real expectations ‰ÛÒ I‰Ûªm just going out there to finish both motos. I have no idea where I‰Ûªm at, I could be top ten, or I could be 30th! The guys on the team have been awesome and have made sure that there‰Ûªs no pressure, so this weekend is about having fun, enjoying the moment, and in a small way proving that I have overcome my injuries to race again at the top level in my country.