Joan Barreda, untouchable in the Vegas to Reno race 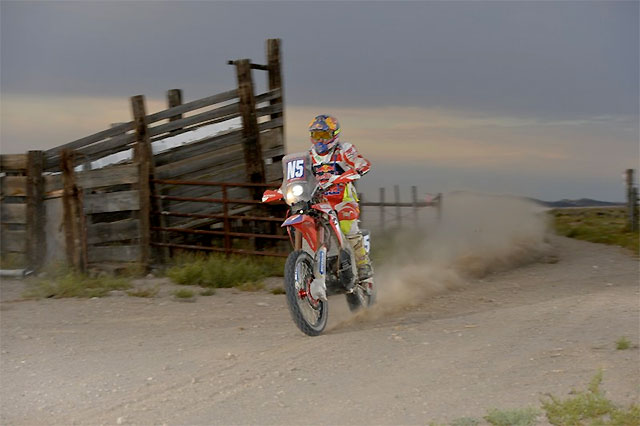 Team HRC‰Ûªs Joan Barreda has scooped a fine win in the twentieth edition of America‰Ûªs legendary ‰Û÷Vegas to Reno‰Ûª. The Spaniard, astride the Honda CRF450 RALLY, dominated the 1000 kilometres of Nevada dust and desert which connect the two cities.

Joan Barreda proved to be the fastest over the 644 mile ‰Û÷Vegas to Reno‰Ûª ‰ÛÒ the longest off-road race in the USA. The race, now in its twentieth year, featured no less than 342 participants. This is the second straight win for Joan Barreda after July‰Ûªs Baja AragÌ_n triumph and the fourth consecutive victory for Team HRC. The growing list includes: the Merzouga Rally in Morocco, the DesafÌ_o Ruta 40 in Argentina, Spain‰Ûªs Baja AragÌ_n and now the Vegas to Reno race in the U.S.

Barreda and Michael Metge made it clear that the Honda CRF450 RALLY is a lethal weapon in the desert. The Spanish rider, starting out from third position, finished the first day‰Ûªs 475 kilometre stint in second spot. Barreda continued to up the ante with an excellent performance on his maiden Nevada Desert adventure. The Team HRC rider then scorched through the 560 kilometres of dust on day two, holding the lead throughout the day and crossing the line with a 7‰Ûª30‰Û