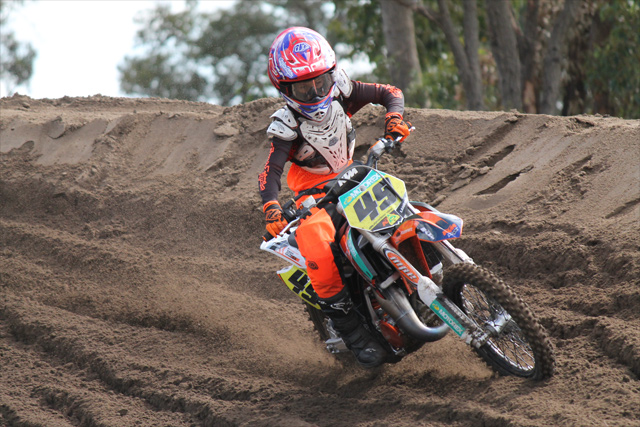 With the buzz in the pits this morning undeniable, riders prepared for a big day of racing, with the 85cc 2-stroke/150cc 4-stroke standard wheel 9-u12 years class providing two qualifying heats for spectators to cheer on to.

When heat one of the 85cc 2-stroke/150cc 4-stroke standard wheel 9-u12 years class hit the deep sandy Bunbury circuit, all eyes were on the line, as the talented grid of riders headed out for their first qualifying race of the day.

When gates dropped, it was KTM mounted Cody Chittick who collected the holeshot and moved in to the early race lead, with the likes of Billy Payne and Larwood slotting in to second and third behind him.

However the battle for the lead had only just begun - the top three managing to check out on the 85cc 2-stroke/150cc 4-stroke standard wheel 9-u12 years field, and put on an outstanding performance for AJMX spectators.

By the four-lap mark, riders spread themselves out, with Chittick only just holding down the lead from Larwood who had moved in to second, while Mandurah City KTM‰Ûªs Liam Atkinson sat comfortably in third.

However the battle for the lead was not yet over. With Larwood on an absolute charge, spectators were treated to a new race leader with only two laps to go, when Larwood charged past Chittick, proving that he means business at the AJMX this week.

When the qualifying race concluded Larwood managed to hold down his lead to the race win ahead of Chittick, followed by Seth Manuel who crossed the line in third.

‰ÛÏI‰Ûªm so happy to get the win this morning, I just need to get past two more qualifying races and then we‰Ûªll go from there,‰Û 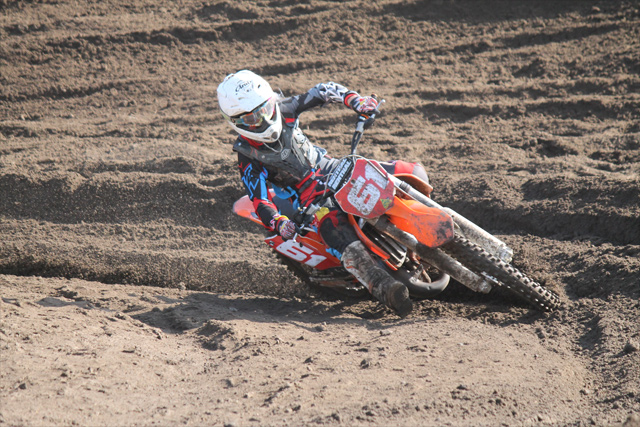 With the 100cc to 125cc 2-stroke 13‰ÛÒu15 years class providing two qualifying heats today, it was an eventful morning at the Shrubland Park circuit, where top riders celebrated, and collected valuable championship points.

In heat one of the 100cc to 125cc 2-stroke 13-u15 years class, it was hard charging KTM mounted Regan Duffy who took the opening race holeshot, before coming under fire from Husqvarna‰Ûªs Riley Dukes.

However Dukes‰Ûª battle with Duffy was somewhat short lived. Despite appearing determined to move in to the race lead, Dukes‰Ûª went down, seeing him relegated to mid-pack, and allowing Duffy to take a commanding race lead.

With Duffy out in front with a comfortable gap on the field, and with Mitchell Outram holding second position, the attention shifted to the battle for third.

And battle they did. KTM‰Ûªs Rhys Budd, Bunbury local Kurt Oinn, and Dukes treated onlookers as they went head to head, with Dukes‰Ûª eventually making a remarkable comeback to slot into third.

When the chequered flag flew, it was a fist pumping Duffy who crossed the line victorious, while KTM mounted Outram concluded the opening qualifying race in second, and Dukes in third.