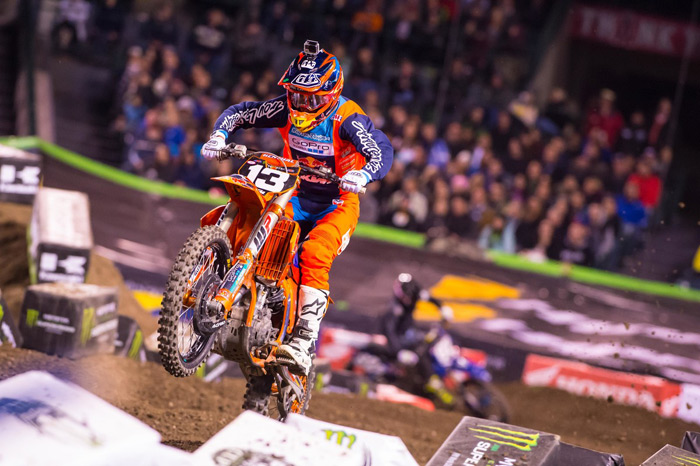 TLD Factory KTM rider Jessy Nelson has been injured in a mid week crash while preparing for the second round of the 2016 Monster Energy Supercross Championship that is to be held this weekend in San Diego.

Nelson had a flying start to his 2016 season, leading the first half of the opening 250 West main event last Saturday at Anahim before finishing second to eventual race winner, Star Racing Yamaha's Cody Webb.

While full details are not avaliable regarding his crash, his team confirmed via Instagram that Nelson had been taken to hospital for MRI and CT scans and would spend the night to further monitor his condition.

"TLD‰Ûªs @jessynelson13 had a high speed get off today while practicing for this weekends SX race in San Diego." The post stated.

"Following the crash Jessy was immediately taken to the hospital for further evaluation. Thankfully at this point his MRI and CT scans show no serious injuries. Nelson will spend the night in the hospital to further monitor his condition.

"We wish Jessy a speedy recovery and hope to see him back in action soon."

The crash was another set back for the hard charging Nelson who also missed numerous races in 2015 due to injury.

Top IMage: Jessy Nelson who finished second in the 250 West Main on Saturday night is in doubt for this weekends round two at San Diego after a mid week practice crash.