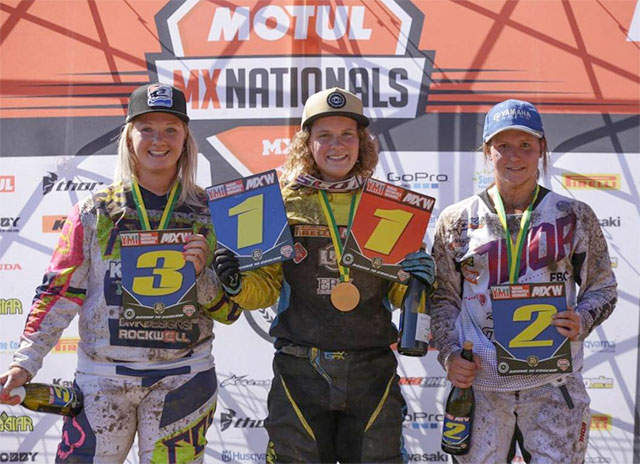 An impressive 29 YMI female riders took to the track at Coolum on the Sunshine Coast this weekend, to race for their own championship, and one thing was made evident throughout the two days of racing, that Australia has some of the fastest female racers in the globe.

Kawasaki‰Ûªs Meghan Rutledge proved early on Saturday morning that she was one of the women to watch throughout the weekend, posting the fastest time during qualifying with a 1:49.055 lap time. KTM‰Ûªs Moore was second quickest on track (1:50.598) followed by defending Women‰Ûªs champion DPH Motorsport‰Ûªs Maddy Brown.

In race one, it was Honda mounted Steph Cutler who secured the first MXstore holeshot, but before long, Brown demanded control of the race, and was followed closely by fastest qualifier Rutledge.

After only two laps, Brown and Rutledge separated themselves from the rest of the field, and shortly after, fans were treated to a fully fledged battle for the race lead. Back from the front two was second fastest qualifier Moore, while Yamaha‰Ûªs Emma Milesevic maintained fourth position.

But the battle at the front was what kept spectator‰Ûªs eyes glued to the track, Brown and Rutledge both having the opportunity to lead numerous times throughout the first race. But on lap six, it all went pear shaped for Rutledge who went down in a turn, dashing her hopes of a race one victory.

And from there, DPH Motorsport‰Ûªs Brown breezed to victory. Second place in moto one was taken by Moore, followed by Yamaha‰Ûªs Tayla Jones in third. Milesevic wrapped up race one in fourth, followed by Toowoomba rider Sarah Guthrie in fifth.

In race two, once again it was Brown who launched in to the race lead, but much like moto one, it took no time at all for Rutledge to find the DPH Motorsport riders rear wheel, setting up race two as the ultimate dash to the finish line.

With the track getting rougher with every lap on Saturday, the women had their work cut out for them in their second race of the weekend, and on lap two, both Brown and Rutledge went down whilst battling for the lead, forcing the pair to have to chase down the field.

With Brown and Rutledge out of the equation, KTM rider Moore inherited the top position, followed by Milesevic in second, and Jones in third.

Despite a late charge from Brown, it was in those positions that the ladies finished in moto two on Saturday, Moore securing her first race win of the weekend, followed by Milesevic in second, and Jones in third. Brown crossed the line in fourth position, followed by rival Rutledge (Kawasaki) in fifth.

When racing kicked off for the YMI Women today, spectators knew after yesterday‰Ûªs racing, and with so much talent within the field, that there would be action on track, so it was no surprise to see DPH Motorsport‰Ûªs Brown jump out of the gate and into the lead in race one this morning, however, Rutledge made her move to the front after only a few turns.

With Rutledge and Brown out in front, fans switched their attention to the positions behind them, and with yesterday‰Ûªs race two winner Moore on a charge, it took no time at all for the KTM rider to make the pass on Yamaha‰Ûªs Jones to slot up to third position.

As race three reached it‰Ûªs closing stages there had been no change to the race order, and when the chequered flag flew, it was Rutledge who took her first race win for the weekend in moto three, followed by defending champion Brown in second and Moore in third. Jones wrapped up race three in fourth, followed by Guthrie in fifth.

When the Women lined up for their final race of the weekend this afternoon, riders were racing for a title, with this year‰Ûªs Australian champion set to be crowned at the conclusion of the final 15-minute moto, and when gates dropped it was Moore who took the final holeshot, but after one lap, Yamaha mounted Milesevic had snatched up the race lead.

After two laps, Rutledge closed in and made a pass on Milesevic to move in to the number one position, while Moore dropped back to third place, followed by Yamaha‰Ûªs Jones. A notable absentee from the front of the field was Brown who was back in sixth position.

With the track getting rougher and rougher with every lap, the ladies once again had their work cut out for them in the final race of the weekend, but Brown began to make a positions, and by lap five, the defending champ was back up to fourth. And with a 2016 title on her mind, Brown also made the pass on Moore, putting her and her DPH Motorsport‰Ûªs Yamaha machine in to the final podium position.

As race four reached its final stages, positions looked as if they had all been decided, however, in a huge turn of events, when the chequered flag was displayed, Brown slowed down prematurely, allowing Moore to snatch back third position on the line, costing Brown the 2016 Australian Championship.

The win in the final race of the day was taken by Rutledge, while Milesevic crossed the finish line for the final time in second position.

Thankfully for Moore, third in race four was all that was required to secure a 2016 Yamaha Motorcycle Insurance Australian Women‰Ûªs Championship, second spot on the podium was awarded to DPH Motorsport‰Ûªs Brown, followed by Kawasaki‰Ûªs Rutledge in third.

‰ÛÏI‰Ûªm absolutely speechless. My whole life, I‰Ûªve lived in the shadows of those other girls and being from WA, we sort of get forgotten being so far over the other side of the country,‰Û