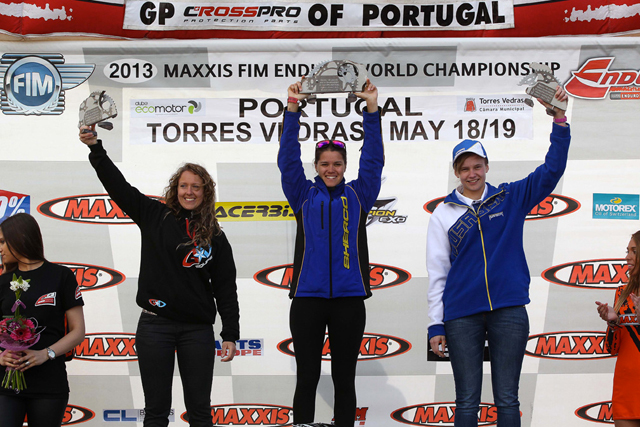 The final round of the FIM Maxxis Enduro World Championship held on the 7th and 8th of September in France was a mixed affair for Aussie Jess Gardiner.

Gardiner got off to a promising start winning the Friday Super Test ‰ÛÒ her first ever, spurred on by the cheers of the enormous crowd. After spending the week walking the highly technical and demanding course it was the encouragement she needed, as it was apparent the final race was going to be the most challenging of the season.

Overnight, weather conditions turned and the sunny dry weather was replaced with heavy rain that continued for most of Saturday. The trials and special tests that had been taxing at the start of the day became almost impossible as the muddy conditions took hold.

For Gardiner the conditions proved to be overwhelming both physically and mentally. Along with other accomplished riders, Gardiner failed to complete the course and as a consequence scored zero points for the day. This meant she was relegated from second to third place in the overall championship standings.

‰ÛÏIt was shattering to know that I had lost second place, but the event wasn‰Ûªt over and I had to focus on putting in a good result to hold on to overall third place." Gardiner stated. ‰ÛÏThankfully the circuit was heavily revised for Sunday‰Ûªs racing so I just put my head down and concentrated on the finish!‰Û