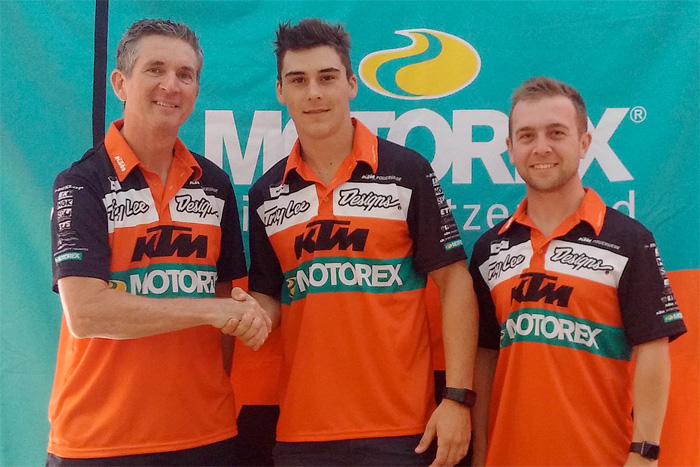 KTM Australia has announced that rising star Jesse Dobson has been signed to take the place of injured MX1 racer Luke Styke on the factory team for this weekend's MX Nationals opener at Horsham, and for the rest of season 2016 including the Australian Supercross Championship.

The just-turned-19 Queenslander is one of the hottest rising prospects in the premier class in Australia, and when Styke‰Ûªs Achilles tendon re-ruptured upon his return to riding a little over a week ago, the team moved quickly to explore options for Dobson's release from his sponsorship arrangements.

Upon receiving the offer from KTM's Race Teams Manager Rob Twyerould, Dobson forewent the pleasantries of a planned 19th birthday party, opting instead for a day spent in the van, hot-footing it down to Sydney to immediately begin testing of his KTM 450 SX-F.

‰ÛÏI‰Ûªm super pumped, I can't thank the team enough for giving me the opportunity to come back." Dobson said. "The last time I raced for the team was in Supercross and I was only 17, and every round we progressed and we had good success.

"To me that feels like a lifetime ago and I feel that I've grown so much and matured since then as a rider. I‰Ûªm in a lot better place coming in this year with these guys behind me. It's kind of a last-minute thing, but I think we've got a good base setting to work off and we are in a good place. For me the job hasn't changed, I'm still going there to win.

"It's good because I fallen right back into the place where I was in the supercross in 2014, and last year even though I was with Husky I were still involved with the boys a little bit in testing at the tracks and I'm good friends with Kirk and with Caleb as well.

"It's a bit of a last-minute rush but it was so good to get the call because it just makes it a lot easier on my behalf, I can now rock up at the rounds with only the clothes I need to wear, and just do my job. Instead of having to pack my stuff in and drive to the round of the week before, I think it‰Ûªll make a big difference. I‰Ûªd like to thank Husky for making this opportunity possible. We were in a really good place with them four days ago, but this just makes it easier.‰Û 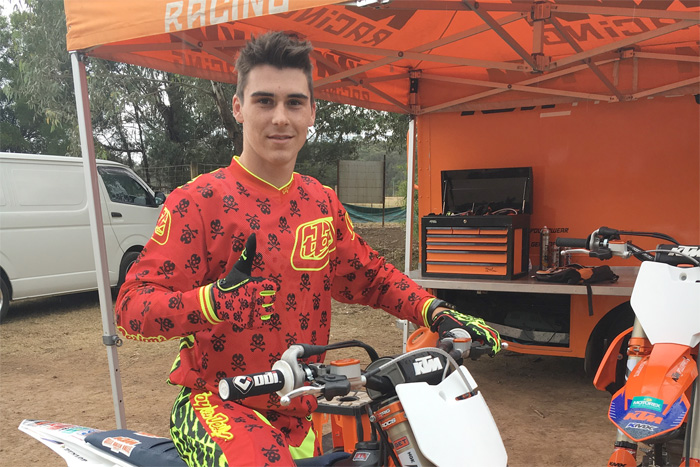 Last year riding for Husqvarna, Dobson also proved himself a regular top five finisher outdoors, running as high as sixth in a career-best effort which would ultimately end prematurely due to a knee injury.

‰ÛÏWe‰Ûªve unfortunately lost Luke to injury, but we‰Ûªve just been able to negotiate a deal with Jesse to bring him on board for the 2016 season." Kyle Blunden, KTM Motocross Team Manager commented. "It‰Ûªs an exciting time for the team.

"I think Jesse is someone that is showing a huge amount of potential, and it‰Ûªs definitely a great opportunity to bring him under the banner and offered him some fantastic support and it takes a lot of pressure off him and his parents, who have been doing a fantastic job up until now. I've known Jesse for a lot of years and I remember watching him on a KTM 65 back when I was working at a dealership that supported him. He someone that I've seen on KTMs pretty much as long as I've been in the motorcycle industry so it's a pretty cool thing to see someone like him reach a level that he has wanted to get to since he was a little kid.

"We've done a lot of testing and all the boys in the workshop from Jordan to Jessie and Danny, they've all been working really long hours, and I can't thank them enough for what they've done. With my role now, I'm not able to be in the workshop is much as I would have liked, but those guys have really stepped up to the plate and worked their backsides off so they've been fantastic. As far as the riders are concerned, I think they‰Ûªve done everything they they can leading into round one, and obviously we'll go there, get those nervous jitters out the way and see where we are at, and hopefully come away with some great results.‰Û