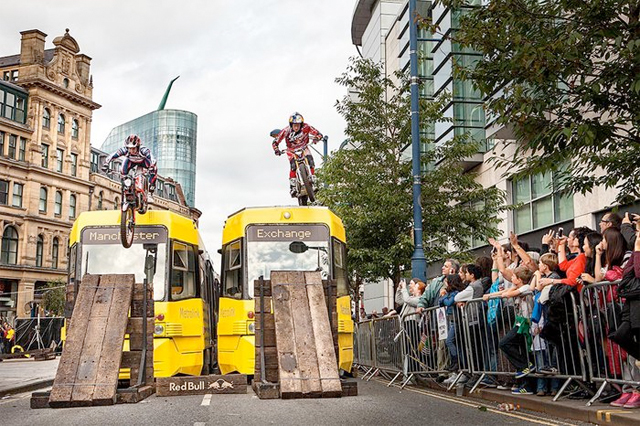 Red Bull City Trial returned to Manchester for a second year in a row with a bang as thousands of Saturday shoppers turned out to get their first glimpse of this sport.

Under some fantastic September sunshine Spain's World number three Jeroni Fajardo, Beta was in devastating form as he raced to victory with a dominant display over the four rounds that took place throughout the day.

James Dabill, Beta was a worthy runner-up in the city as he cruelly faced the evil eliminator process on three occasions. The fans favourite and Red Bull UK's longest serving athlete Dougie Lampkin - Beta produced a typically gritty performance to take third spot much to the delight of his many followers.

The second edition of the Red Bull City Trial adopted a unique format and the eight pro riders lined up against each other in a series of head to head races in a knockout format. The mighty dual lane course was one of the stars of the day with the two distinct parts of the challenge bringing out the best of the riders speed and skill not to mention a few hefty spills too.

The iconic yellow Manchester Metrolink trams separated the two halves of the course which included two giant steel footballs, a tricky sleeper path and a huge double quarter pipe ramp up which the winners leapt to glory.

World number two and Red Bull athlete Adam Raga - Gas Gas endured a tough and frustrating day in Manchester as he faced a series of top riders as a result of the round by round draw and was defeated by his speedy Spanish compatriot Fajardo in his only appearance in one of the four finals.

Raga was to finish a disappointing fifth on the day as Britain's Jack Challoner - Beta stole fourth place from him thanks to his semi-final showing in the last round. Challoner can count himself fortunate to have made it through to the finish as he survived a massive crash as he raced to the roof of the tram early in the competition.

Newly crowned British champion Michael Brown - Gas Gas showed moments of speed as did Sweden's European champion Eddie Karlsson - Jotagas, although were unable to consistently match the pace of their rivals as the huge crowd applauded the brave efforts of each and every rider. Jack Sheppard - Beta rounded out the pro riders whilst Jack Price - Gas Gas won his day long battle with Billy Bolt - Ossa in the youth category which included Dan Peace and Iwan Roberts.

Pleased but exhausted Lampkin spoke after having had to give best to Dabill in a fitting all British climatic close to the second ever Red Bull City Trial.

"It's been yet another amazing day in my long career over which Red Bull have supported and given both me and the sport of Trial some incredible opportunities." Lampkin stated. "To be back in Manchester city centre amongst thousands of non specialist fans on a day when the sun has shined is a really great feeling."

"Unfortunately I didn't just have the speed today to match Jeroni who has ridden amazing throughout each round, or not just quite enough left in the tank to beat James in the last final, but that doesn't take anything away from what has been an absolutely incredible event for the riders, the fans and the sport. I would like to thank Red Bull and everyone involved for making it happen," he added.

"I am off practising now ready for next year's Red Bull City Trial whenever and where ever that might be!" Lampkin concluded.