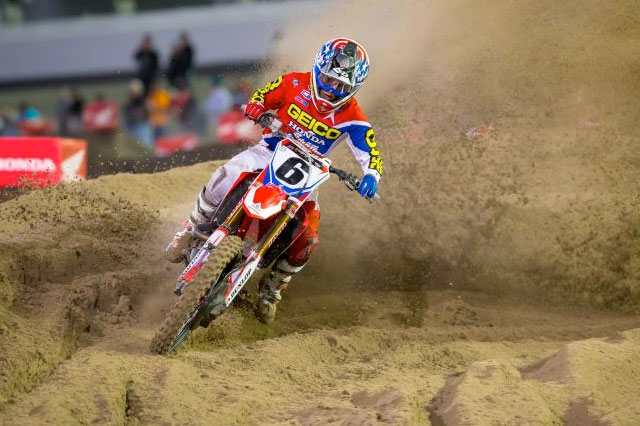 It was an exciting night for Team Honda HRC as fill-in rider Jeremy Martin put together a stellar performance, leading over half of the main event before taking the checkered in second at the 46th annual Daytona Supercross by Honda.

Martin who currently rides full-time for the GEICO Honda squad in the Western Regional 250SX series impressed everyone during his premier-class debut aboard a factory CRF450R.

Despite having a poor gate pick, Martin launched off the line from the far outside and didn‰Ûªt let off the gas until he found himself at the front of the pack. The Minnesota native held off multiple advances from the competition throughout the first 10-laps of the race before relinquishing the lead. He held tough to the finish, taking the checkered nearly 10-seconds ahead of third.

"Honestly, I was surprised that I qualified so good," Martin said. "These guys are really fast and they‰Ûªve had a lot of experience. I just had a good feeling today. That new Honda is an amazing bike.

"Today was my eighth day on the bike and I‰Ûªve really enjoyed it and working with the whole Factory Honda team. The bike‰Ûªs good. I had 18th gate pick and I was on the outside. I knew I had to do something, so I threw it into the first turn on the outside and I railed the crap out of that berm. Just tried to do my best, but I knew the green machine was coming. To be able to lead, I think it was 10 laps, was just so cool. I have much respect for everyone in the class. I just got a good start and put myself in a good position." Martin concluded. 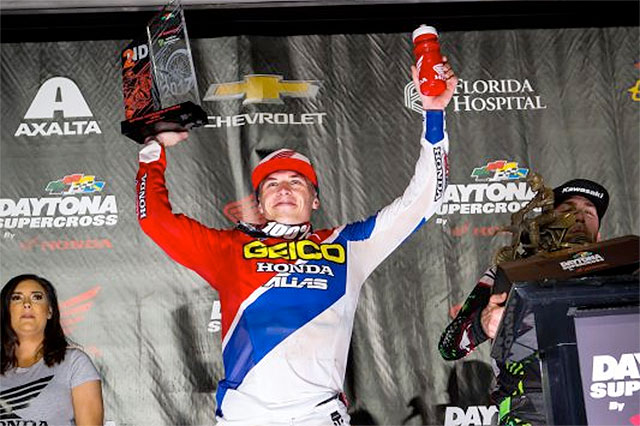 Jeremy Martin on the podium