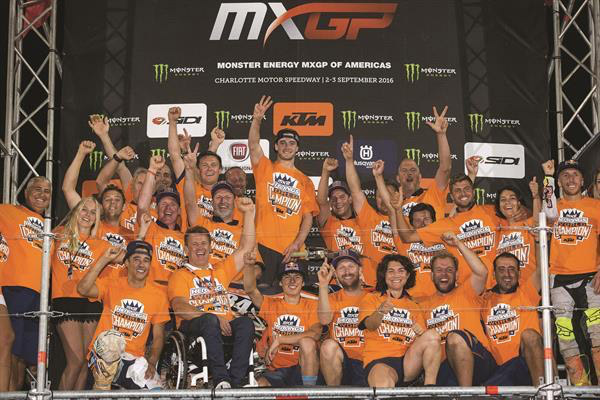 It was the Dutch rider‰Ûªs third world title and very well deserved after recovering from a series major injuries in the immediate past seasons.

Jeffrey Herlings went on to take third in race two behind US national champion Cooper Webb, which gave the overall win to Webb. American Austin Forkner was overall third.

On his way to the title, Herlings won the first twelve rounds on his KTM 250 SX-F, dropping only three possible points with a second place in the opening moto in Italy.

He then sat out three rounds (Czech Republic, Lommel in Belgium and Switzerland) to heal a broken collarbone. He bounced back at the next round at home in Assen for another GP win, and on the start of race one at Charlotte he knew he only had to finish in front of closest rival Jeremy Seewer to take the title.

‰ÛÏI am super, super happy, especially after everything we‰Ûªve been going through with a broken femur, a dislocated hip, two broken collarbones and almost losing my little finger." Herlings said. "It‰Ûªs number three and hopefully many more to come.‰Û