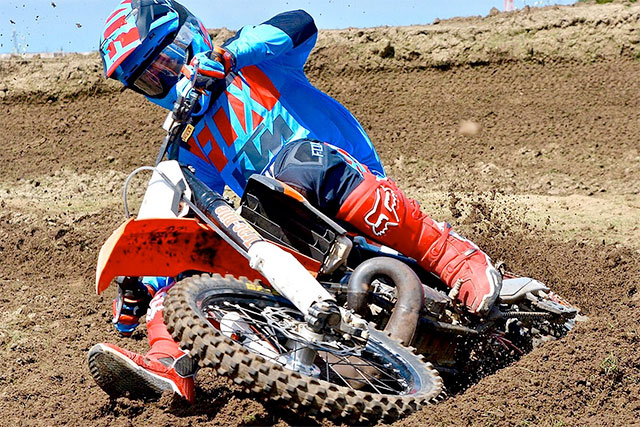 One week from the start of the MX Nationals, KTM Factory Support rider Jayden Rykers proved he is peaking at the perfect time with a sublime victory in last weekend's New South Wales State championship in Canberra.

Riding in the MX2 category, the 19-year-old from Byford in Western Australia and his Davey Motorsport KTM 250 SX scored a perfect two from two, to win the title ahead of Kyle Webster and Joel Wightman.

Rykers faced some early competition from Raceline Pirelli KTM Motocross Racing Team rider Dylan Wills, who set the fastest time in practice, and powered his KTM250SX-F to the holeshot in the opening moto.

The development team rider‰Ûªs moment in the sunshine was short lived, however, as shortly after setting the fastest lap of the race he stepped off in fourth gear on a sweeping corner and was flung heavily down the track.

Wills limped home in eighth for the moto, then, feeling decidedly second-hand, withdrew from the second moto with his focus on next weekend‰Ûªs MX Nationals opener.

"It's been a good three weeks for me, clean sweeping both the Victorian titles opener and the New South Wales title this weekend," Jayden Rykers said.

"It's a good lead-up for Horsham this weekend. I'm definitely where I want to be with my preparation, and everything is going to plan - my bike‰Ûªs working good and I‰Ûªm fit. Everything is on point and ready to go.

"I‰Ûªm really looking forward to moving up to MX2 this year - I think a few of the Under 19 guys from last year are a little bit underrated coming in, but being under the radar a little bit is a good thing.

"It's hard to gauge the data where I might fit in. We can only wait until the first couple of rounds are done to see how I do shape up," Rykers concluded. 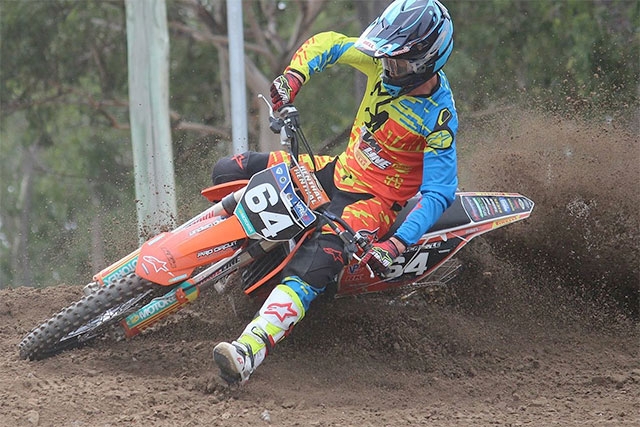 Dylan Wills
Dylan Wills was still positive despite his crash.

‰ÛÏThere were a lot of positives to take away from the weekend," the Pirelli KTM Motocross Racing Team rider said. "I qualified fastest by a little bit, and it was nice to get a holeshot against Rykers since he‰Ûªs known to be a good starter.

"I've switched over to the four-stroke this year and it shows how good our package is. I got out in front early and started to walk away just a little bit, and put down some fast times, but at the start of the third lap I think it was I came around this sweeper, and the back stepped out when I was pretty much pinned in fourth gear and I just cartwheeled down the track.

"It was pretty gnarly, but I got out of it really well. I got up and tried to race the rest of the race, but I kind of saw the bigger picture with Horsham just one week away and kind of took it easy after that.We‰Ûªve definitely got a good package - the race bike is unreal so I‰Ûªm looking forward to next weekend," Willis concluded. 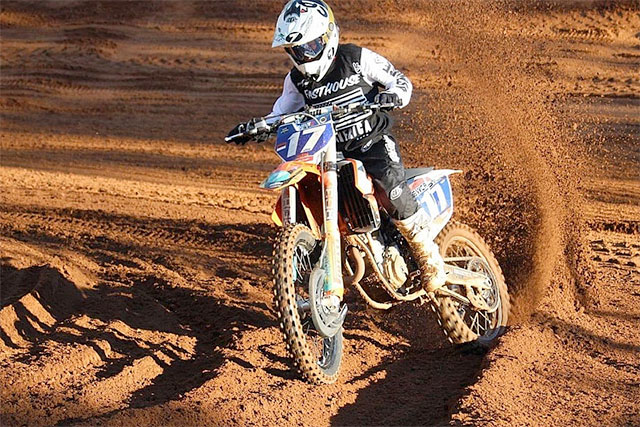 The KTM Newcastle-backed rider from Woodrising finished second in both motos, trailing Husqvarna‰Ûªs Connor Tierney on overall points, and leading home Blake Parker, who was third.

"In the first one I had a really good ride; I got the holeshot and was leading for the first half, and then Connor Tierney got me up the inside and I stayed with him for the whole rest of the race," Pozniak explained.

"That was good since he was one of the front runners in the Under 19 Nationals last year. In the second one I just stayed with Connor for a bit and by the end of it I felt really good. I'm fit has, so it's good to finally do some 20 minute motos in a race.

"I've only really been on my race bike for about a week now, but we used the week wisely and done a lot of testing, while the two more days this week just getting the suspension fully sorted. The KTM four-stroke‰Ûªs got a lot of power, so it‰Ûªs awesome," the 17-year-old concluded.

Coastal KTM rider John Bova added another title to the orange tally when he won the 200-250cc 13-U15 class from Hayden Matterson and Joshua Whitehead.