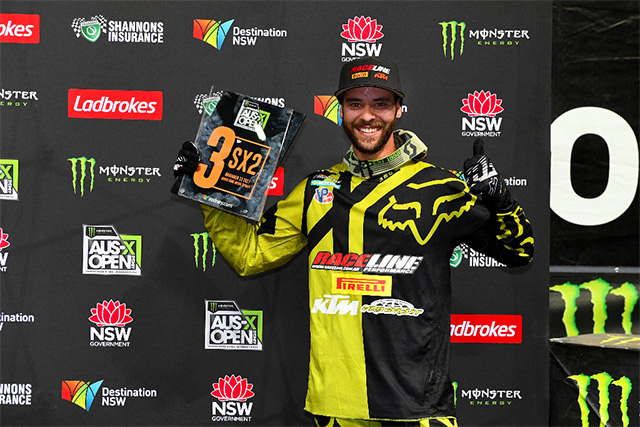 Raceline Pirelli KTM‰Ûªs Jay Wilson collected the team‰Ûªs first Supercross podium of 2017 over the weekend, finishing in an outstanding third place in the SX2 class on day two of the Monster Energy AUS-X Open in Sydney.

The event which was host to a sold out crowd on Saturday and thousands of spectators again on Sunday was the only double header on the calendar this season, and Wilson as well as his teammate Morgan Fogarty utilised the opportunity to show Australia what they‰Ûªre capable of.

On Saturday Wilson qualified in seventh on the indoor track, then took second in his heat race, immediately gaining entry into the SX2 final. When gates dropped on the first main event of the weekend, Wilson charged to a consistent fourth place, making up significant championship points.

But it was on Sunday that the real magic for Raceline Pirelli KTM and Wilson unfolded.

After qualifying in fourth and dropping close to a second off his lap time from the previous day, Wilson once again took second in his heat race and proceeded to the SX2 main event. Then, for 15 laps Wilson took on the best riders in the country before crossing the finish line in third ‰ÛÒ claiming his first podium finish in two years. Following the weekend‰Ûªs event, Wilson now sits in third in the SX2 Championship standings with one round remaining.

‰ÛÏWhat an awesome weekend ‰ÛÒ we have worked so hard to get back to where we are, and to reward those who have supported me with a podium at the biggest event in the country is so special,‰Û