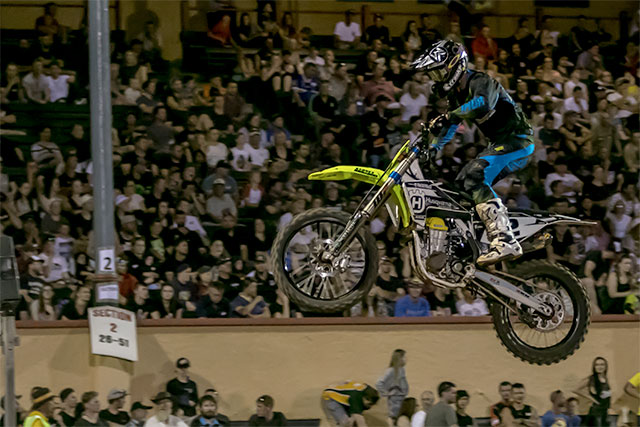 Aussie Motocross legend Jay Marmont has improved his position in the rankings of the Australian Supercross Championship after a second consecutive fifth-place finish at last night's third round in Wayville, South Australia.

After an eighth and a fifth from the first two rounds of the championship, Marmont continued to accrue solid points in his supercross comeback, after this time spending much of the race battling for a podium finish aboard his Husqvarna FC 450.

Justin Brayton won the SX1 event ahead of Dan Reardon and Kyle Peters, while Marmont moved smartly into the top five early on and continue to contest the podium with Peters and Wil Hahn as they drew clear of the pursuing pack.

The result sees Marmont well positioned in fifth place in the premier SX1 category, at the halfway point in the Aussie championship.

‰ÛÏIt was a really good night, I started off the day a little bit rough, just didn't get into my groove and didn't qualify the best, but I kind of knew that my qualifying time would be the race pace," Marmont explained.

"I made a few changes to the bike, and we got it a little bit more race ready, and the Husky performed really well all night. In the heat race we came out and straight away we were on race pace with the guys. I finished top three and you probably could have thrown a blanket over us. That gave me a decent gate pick for the main, but I didn't get the best of starts; probably rounded the bend in around eighth, but I made some quick passes and got myself up to fifth, and from their battled basically for the podium with Peters and Wil Hahn, and just kind of checked out from the rest of the pack.

"Unfortunately I didn't make any headway, but in saying that we were actually battling for third rather than just sitting back in fifth this weekend and getting closer towards that pointy end of the field. I was pretty happy to walk away with a good result, obviously a podium is what we are striving for, but right now it‰Ûªs stepping stones.‰Û