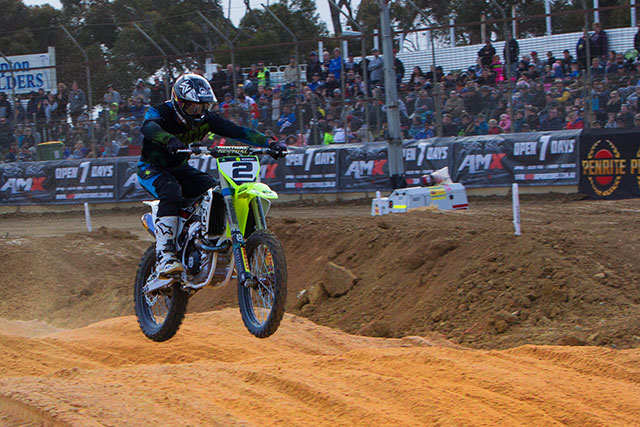 Former Australian Motocross and Supercross Champion Jay Marmont has maintained his incredible streak of form since coming out of retirement to join the ranks of Australia's Supercross elite, finishing fifth in last night's round of the Australian Supercross championships in Melbourne.

On a slippery, rock-hard track that tested the skill and composure of competitors to the max, Marmont capitalised on a top-three start and delivered 20 laps on target with relentless reliability. Marmont held third place for over half the distance only to drop a few places to hard charging Americans Wil Hahn and Justin Brayton in the closing laps. Dean Ferris went on to win the main ahead of Daniel Reardon and Wil Hahn.

His third top-five finish in as many rounds sees Marmont shore up his fifth place position in the rankings of the Australian Supercross Championship with next weekend's Aus-X Open yet to come.

‰ÛÏIt was another good night. Qualifying wasn't the best - we were close on times, so we weren‰Ûªt too worried, I knew that getting into a good position was going to be key," Marmont explained.

"It was slippery before practice and from then on they just couldn't get any more water into it because the track was just baked. Honestly, we were running about a 10 psi tyre pressures in the heat race, and they were going up to 20 psi after just eight laps just from the amount of wheel spin you were getting out there.

"It was unbelievable. I finished second in my heat after leading at one point then got a really good jump in the final. Will and Justin got a bit stuck together which allowed the Yamaha boys and I to go up the inside. Will got me around lap 12, and then I unfortunately made a couple of mistakes in the later part of the race and allowed Justin Brayton to get me on the last lap. Overall a very positive result, we were close to the podium but unfortunately just drifted a couple of spots back to fifth. But aside from that it was a really good night, no crashes when it was a really tough track. You definitely didn't want to be on the ground,‰Û