Jay Marmont Back With Husqvarna For 2016 SX Season 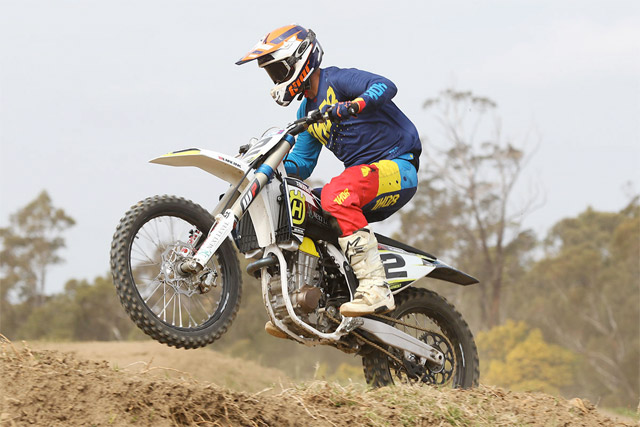 Multiple National Motocross Champion Jay Marmont will be back in Husqvarna colours for this year's Australian Supercross championship, which kicks off at Jimboomba, south of Brisbane on Saturday night.

Thirty-three-year-old Marmont, who dominated motocross in Australia from 2008 to 2011, last raced for Husqvarna in 2015 at the Manjimup 15,000, and will contest the premier class aboard a Husqvarna FC 450.

The 2012 Australian Supercross Championship winner emphasises that he didn't make the decision to come back for the Aussie titles lightly, and though he might be a little light on supercross conditioning, his general fitness is extremely good, and his synergy with the bike at a high level.

‰ÛÏIt‰Ûªs very exciting. I‰Ûªve dibbed and dabbed at non-contract races in the past, but to come back to professional racing at the highest level in Australia has been a decision I haven‰Ûªt taken lightly. But it's something that miss and that I'm passionate about.

"I've been able to put a little program together with my brother and Husqvarna Australia, and it's costing us money to go racing, which probably hasn't happened since I've been 16 years of age. So I'm definitely doing it out of a passion for the sport, rather than any other reason. It's exciting times.

"To be totally honest this is only my ninth outing on the bike prior to Supercross, but I feel really comfortable. I know my race fitness might not be there, but in saying that, you just never know what can happen. I feel rejuvenated, and I can just go out and take it as it comes.

"With the riders who‰Ûªve come out to my track, my pace has been faring pretty well against them, having good people around me, good physios and a great bike underneath me - I've got all the tools to make it happen.

"I love the bike. It hasn't really taken long to adapt at all on the Supercross track, I find it really good on the whoops and it's quite an easy bike to turn and get out of the turns, and I believe I can do some damage on it.

Another returning racer getting back into the groove for Jimboomba is a slightly less well-known former pro-level racer; Husqvarna Australia's own 34-year-old Qld/NSW Brand Manager, Nathan Crawford.

Though he shares his name with the famous teenager from the MX2 ranks, Crawford was spreading his own blood sweat and tears around the tracks of Queensland a decade or so earlier, and will ride in the premier class aboard a Husqvarna FC 450, ‰ÛÏjust to see what he can do, and to support a pro-active Race Promoter trying to re-invigorate the sport of supercross."

Husqvarna‰Ûªs ‰Û÷younger‰Ûª Nathan Crawford - who went ever-so-close to winning the National MX2 crown month ago before lacerating his spleen and kidney in a practice crash - will definitely miss the first two rounds of the Australian Supercross championship.

Crawford has been out of hospital for a little over three weeks now and is back in the gym training hard, but isn‰Ûªt expected to sit on a motorcycle for at least another three weeks.

The ambitious teenager has, however, already targeted round three of the Australian championship for his return, at the end of next month.

‰ÛÏWe‰Ûªre three weeks and two days since hospital now, and I'm back to what I was doing before I heard myself, as far as being in the gym and stuff like that. So I'm pushing hard on the gym and still being active. It's feeling really good so hopefully another three weeks at the most and I can get back on the bike and start getting ready for the third round.‰Û