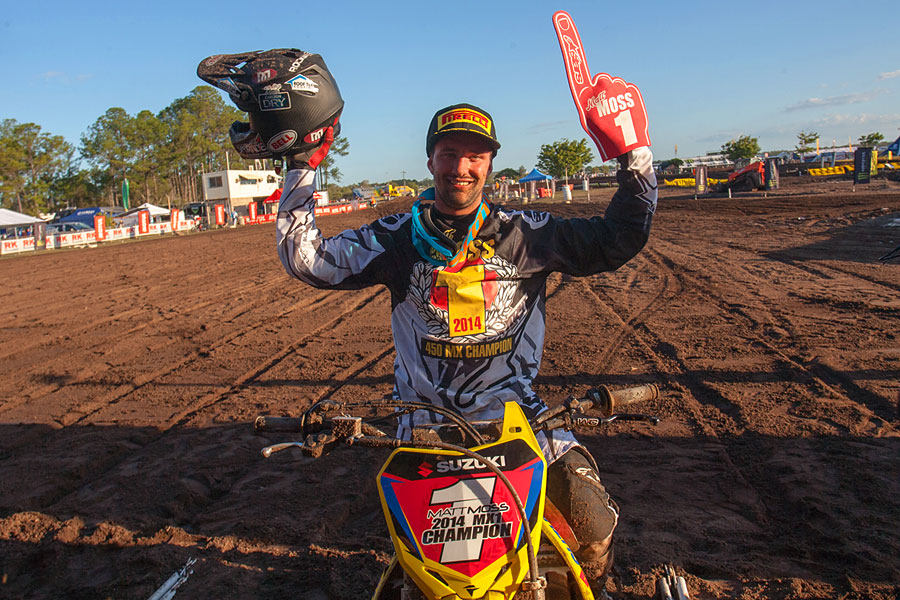 Moss controlled this year's championship on board the RM-Z450 from the outset, defending his number one plate in convincing fashion to claim what was his fourth-career national motocross championship (MX2 in 2009/2011 and MX1 in 2013/2014).

Sunday's 10th and final round was a gruelling one for riders, with Moss entering the weekend holding a 37-point advantage in the standings. His fourth in Super Pole combined with 5-5-8 moto finishes for fifth overall was enough to win the title by 13 points.

"It was really hard having the red plate from the start, even more difficult than last year's championship, but all in all it's been a great year for Team Motul Suzuki," Moss commented. "We'll look to keep going from here and I've learnt a lot with some great challenges.

"I'm just so happy because it's not easy to defend a championship and we did it. I would love to get more championships from here and I can't see why we wouldn't. The RM-Z450 has been great all year and the team was really able to get the best out of it. Thank you to everybody who has played a part and been involved along the way!"

Team Motul Suzuki manager Jay Foreman said it was another strong year for the team, with the RM-Z450 proving its class at the highest of levels and Moss again delivering a championship-winning run of results across the season.

"It was a long, tough day, but anyway we got through it and it's been great," Foreman explained. "Matt did what he had to do, made a couple of mistakes along the way, but we came away with the win and we're over the moon."

Despite missing the final three rounds of the season with a wrist injury, standout New Zealand rookie Rhys Carter concluded his maiden season 14th overall in the championship alongside Moss within the Team Motul Suzuki squad.

The team will now turn its attention to defending the Australian Supercross Championship with Moss when it commences at Bathurst, NSW, on 10 October.

Top Image: Matt Moss made it back to back title for himself and the Motul Suzuki Race Team