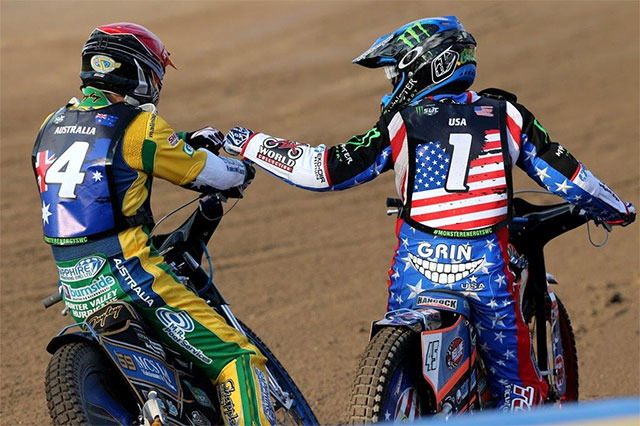 Britain‰Ûªs new National Speedway Stadium stages the competition for the first time as Denmark, Australia, Russia and the USA battle it out for the last place in Saturday‰Ûªs Final, with the winners meeting hosts Great Britain, Poland and Sweden.

All four Race Off teams practice in Manchester on Friday afternoon with managers casting an eye over their stars, before naming their final four-man team and one under-21 reserve to the FIM no later than 30 minutes after the 12pm session at around 2.30pm.

Australia are likely to be led by 2012 world champion Chris Holder and Doyle, who is currently third in the World Championship.

Belle Vue Aces hero Max Fricke and their team manager Mark Lemon should also have a key role to play, with the event taking place on their Elite League home track.

The Aussies finished second to Sweden at Event 2 in Vastervik on Tuesday, with Doyle topping their scorechart on 12 points.

The Swindon star was delighted with the role played by Monster Energy SWC debutants Fricke and Masters, who racked up nine and five points respectively. And he hopes their efforts will stand the Aussies in good stead for the Race Off.

He said: ‰ÛÏI think the young boys Sam and Max did a really good job. It was their first time in the World Cup and it‰Ûªs not like we were riding on our back doorstep. They weren‰Ûªt riding in Britain and these boys are fairly new to the tracks in Sweden. It was the first time I‰Ûªd raced in Vastervik. Hats off to the young boys; they all did their jobs.

‰ÛÏWe just weren‰Ûªt good enough in Vastervik. Sweden did a great job. We knew it was going to be tough and they proved it was.

‰ÛÏWe led for a few races. The first round went to Australia. I think we just had a little lapse in the third round, but that‰Ûªs speedway. We move to Manchester.‰Û