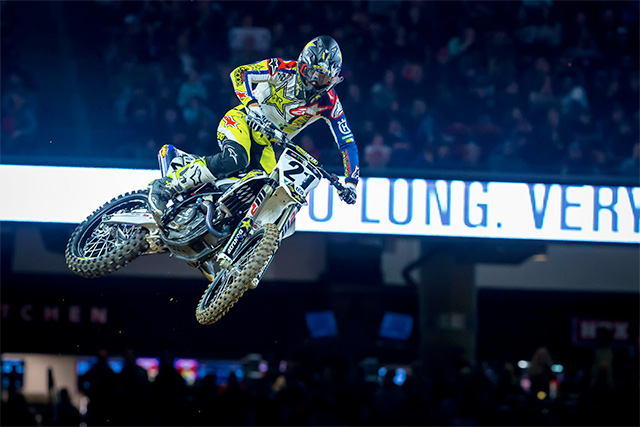 Jason Anderson has taken over the points lead in the 450sx class of the Monster Energy AMA Supercross after dominating the competition and taking a massive, come from behind main event win, while in the 250 class Aaron Plessinger took the win.

After a few years off the schedule, AMA Supercross championship headed to Houston, TX for the second round of the series.

Anderson's job was made somewhat easier with current points leader Marvin Musquin going down in his heat race and calling it a night before the main with an injured shoulder. Kawasaki's Eli Tomac didn't start the night after struggling to cope with a shoulder injury from the opening round. Anderson's own team-mate Dean Wilson was also a scratching.

From the very first lap of the day, Anderson was in the zone and rolled on his own momentum all night long riding with the perfect mix of raw speed and control.

The Rockstar Energy Husqvarna Factory Racing rider stole the show and notched his 2nd career victory in Houston's NRG Stadium after chasing down early pace setters Weston Peick, Justin Barcia and Ken Roczen in the final and eventually cruising to a comfortable win..