Plessinger Extents 250 Lead With Back To Back Victories. 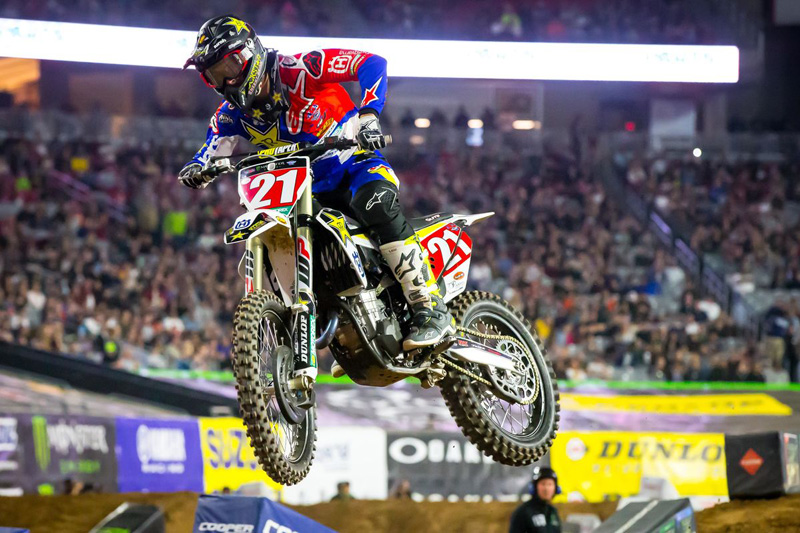 Rockstar Husqvarna‰Ûªs Jason Anderson has increased his point‰Ûªs lead after a dramatic last lap at fifth round of the 2018 Monster Energy Supercross Championship held in Oakland.

It was Factory Honda‰Ûªs Cole Seely who grabbed the early race lead and looked in control of the race with team-mate Ken Roczen sitting in second place as the riders behind fought for position.

Up front the technical track caught out Seely, allowing Roczen to take the race lead, while championship leader Anderson put a pass on Factory KTM‰Ûªs Marvin Musquin for third place that left the Frenchman on the ground.

With two laps to go, Anderson locked on to Roczen rear wheel and the two riders battled with Anderson moving into the lead through the whoops before Roczen quick re took the lead.

On the final lap, Roczen held Anderson out through the whoops, but miss timed the jump out of the next corner. Anderson took full advantage, re taking the lead and racing to a narrow victory from Roczen with Bagget in third.

Musquin crossed the line in 4th, while Barcia moved by Seely to finish 5th.

Cooper Webb had his best round of the season in 7th ahead of Broc Tickle in 8th, Justin Brayton in 9th with Josh Grant recovering to 10th after an early race crash.

Eli Tomac after his crash rounded out the night in 13th one position ahead of Australia‰Ûªs Chad Reed who continues to improve weekly and early in the night won the LCQ to progress to nights final.

In the championship standings Anderson now holds a 15 point lead from Ken Roczen with Barcia a further 2 point back in third.
When the gates dropped on the 250 main event it was Alex Martin who grabbed the holeshot aboard his Troy Lee Designs KTM holding the lead for the opening laps before Geiko Honda‰Ûªs Christian Craig took the lead with an impressive pass through the whoops.

Plessinger who finished the opening lap in 6th position, worked his way into second place, dispatching of championship rival Joey Savatgy in the process.

Race leader Craig made a big mistake at the midway point of the 15 minute plus one lap race, cross rutting on a jump face and launching off the track allowing Plessinger to move into the lead.

In the dying stages of the race, Plessinger who was fighting a cold, came under pressure from both Savatgy and JGR Suzuki rider Justin Hill.

However with Hill and Savatgy holding each other up in their battle for second spot, Plessinger crossed the line to take his second straight round win ahead of Savatgy in second and last years 250 west champion Hill in third.

Craig came back to finish fourth, ahead of Martin who finished his first race after retruning form injury in 5th.

Geiko‰Ûªs Chase Sexton made the best of a bad start to finish the night in 6th.

It was a tough night for championship contenders Adam Cianciarulo and Shane Mcelrath who both suffered incidents in the opening corners of the race.

Cianciarulo was able to climb back to 7th while Mcelrath who took a trip to the mechanics area finished the night out in 15th, putting a huge dent in his championship aspirations.

Australia‰Ûªs Hayden Mellross had a solid night, sitting in third position for the majority of his heat race before going on to finish 4th and again impressed in the night‰Ûªs main event finishing 10th aboard his 51 Fifty Yamaha YZ250F.

In the championship standings Plessinger holds a 8 point lead over Savatgy. Despite the bad night, Mcelrath sits in third position 19 points down on Plessinger. 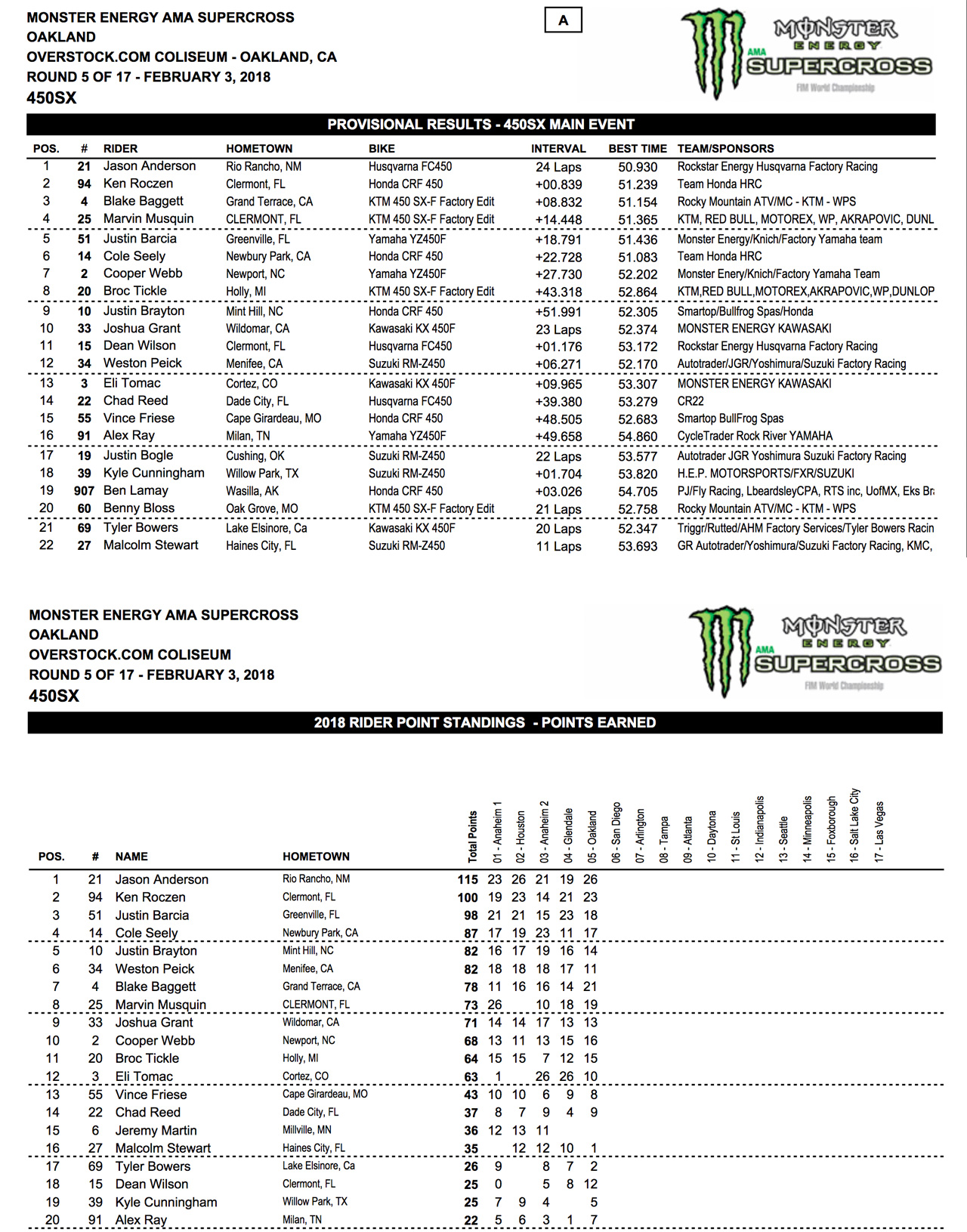 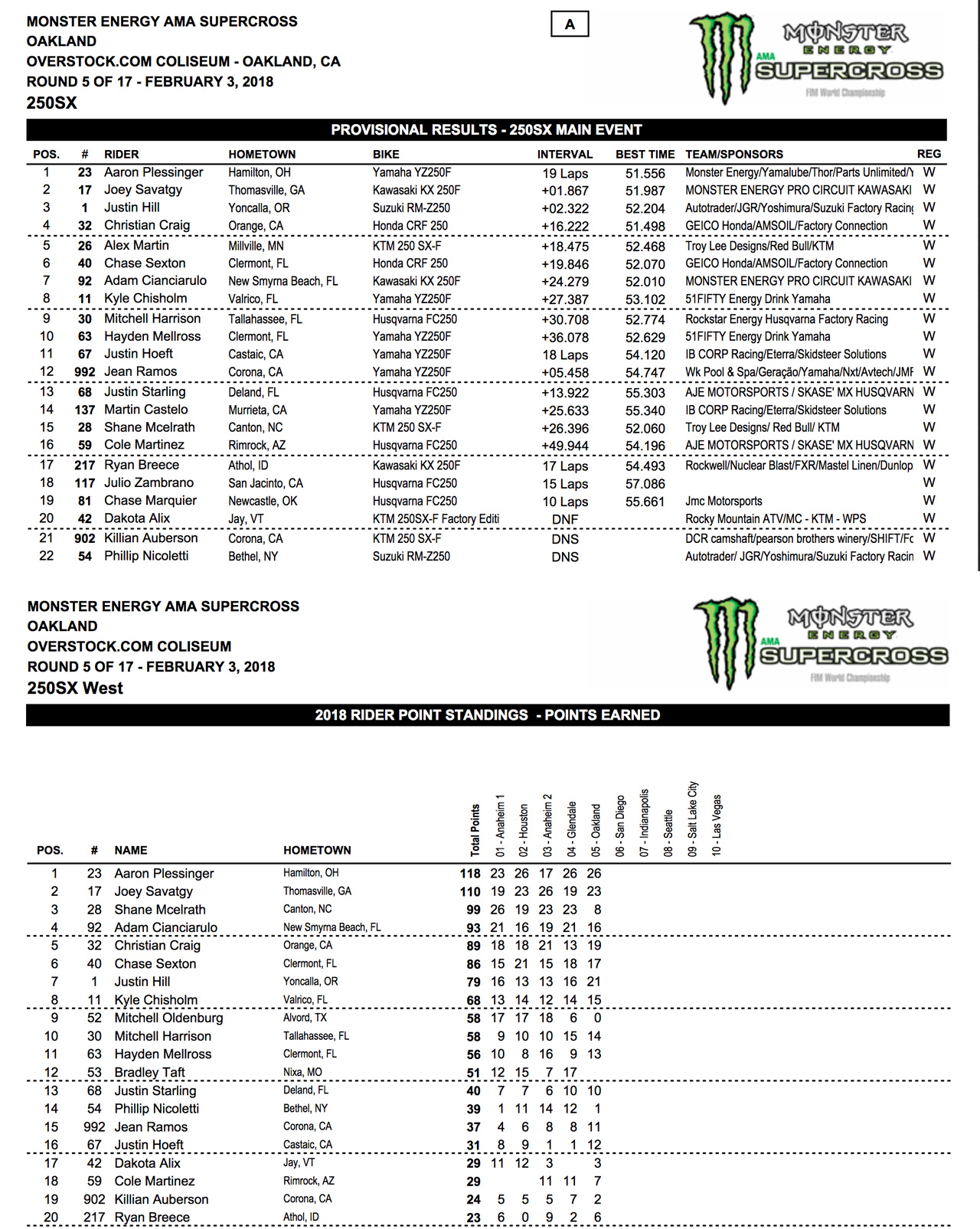