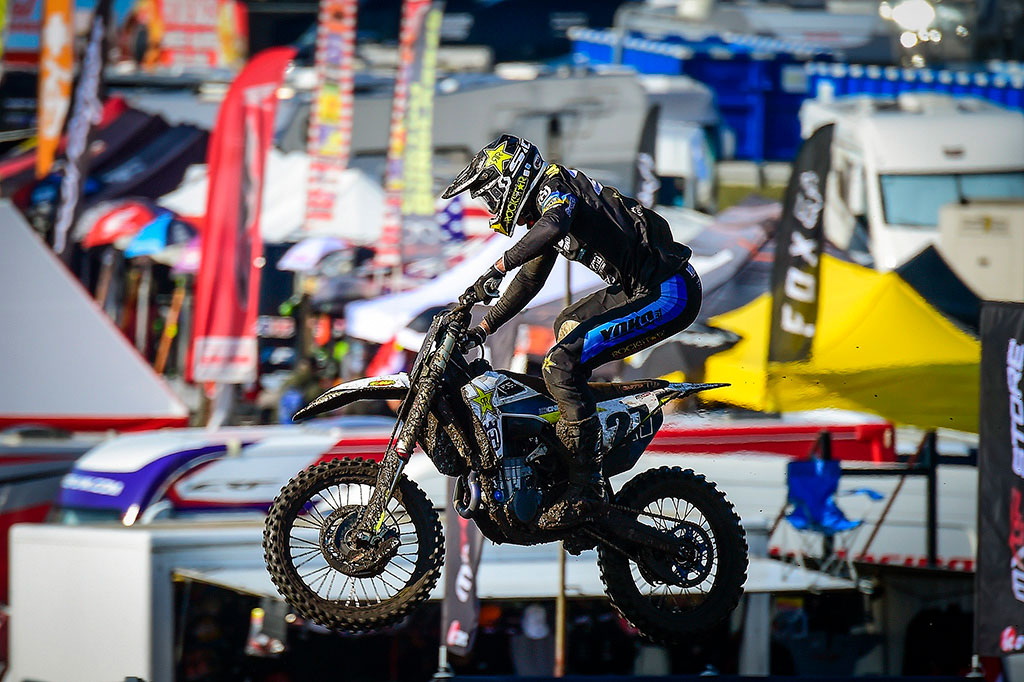 Aminas Jasikonis
Arminas Jasikonis has set the pace in the MXGP class while Jago Geerts was once again fastest in the MX2 class as the MXGP of the Netherlands got underway in the muddy trying conditions at Valkenswaard.

In MXGP qualifying race it was the Monster Energy Yamaha Factory MXGP pilot Gautier Paulin with a flying start out of the gate, closely followed by Team HRC‰Ûªs Tim Gajser and Spaniard Jorge Prado. Gajser made a quick pass on Paulin, moving into the lead a few moments later.

As Gajser led the way on the opening laps, Prado was in second after passing Paulin and battling with Jeffrey Herlings and Pauls Jonass, who was being chased down by his team-mate Arminas Jasikonis.


By lap two, the racing in the top 6 was extremely close, with Herlings losing two positions to the two Husqvarna factory riders, Jonass and Jasikonis, meaning that there was no room to relax. But it wasn‰Ûªt long before the Dutch rider reacted, passing both riders back and setting his sights on higher positions, with Prado and Paulin ahead.

On lap 6, disaster struck Gajser who was forced out of the race due to an electrical issue, meaning that he would have to line-up last on the gate for tomorrow‰Ûªs races. This allowed the MXGP rookie Prado to take the lead, with Herlings on his tail pushing for the race win. Meanwhile Jasikonis was already moving quick, moving past his team-mate Jonass and then Paulin, to go after Herlings and Prado. 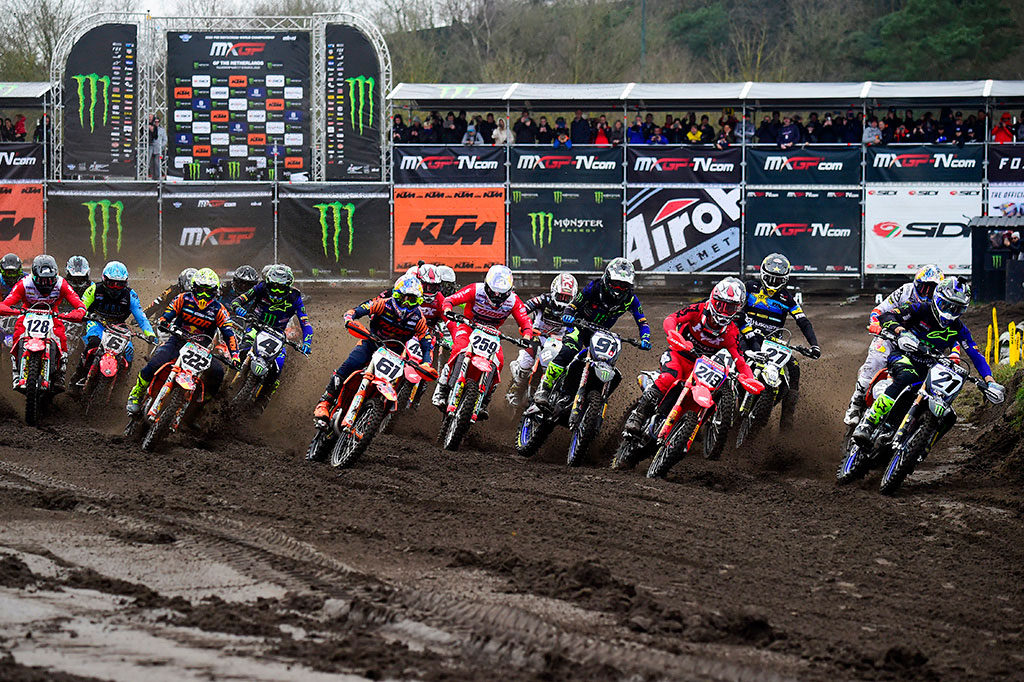 MXGP class hits turn one at a muddy Valkenswaard
With the end of the race nearing, Herlings put a charge on for Prado, with both riders pushing each other to the limits on the pit-lane straight, but it was Herlings who came out on top. Sensing a good opportunity, Jasikonis moved swiftly to pass the Spaniard and follow Herlings in front.

With four laps to go the battle for the win was on, as just 1.407 seconds separated both riders. But Jasikonis was absolutely flying and it was clear that he was on a mission, passing Herlings just a lap later and becoming the new race leader. 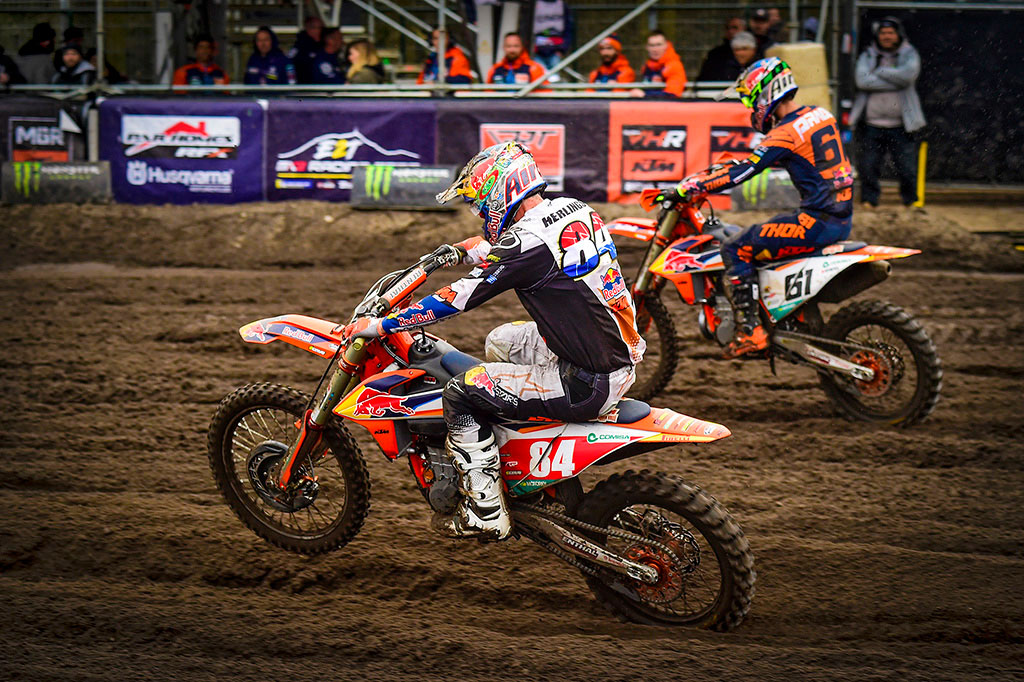 Jeffrey Herlings battled with team-mate Jorge Prado.
In the end it was Jasikonis who secured his first qualifying race of the 2020 MXGP season, followed by Herlings in 2nd and Prado crossing the line 3rd. Jonass finished the race in a strong 4th, while Shaun Simpson had an impressive ride to finish 5th. Home rider, Glenn Coldenhoff finished 6th ready to battle for his first podium in Valkenswaard during tomorrow‰Ûªs races.

‰ÛÏIt‰Ûªs been a long time since my last qualifying race win back in 2017, it‰Ûªs just my second one but I‰Ûªm really happy to see the hard work paying off already," Jasikonis said. "It was a really fun race, it‰Ûªs been a big mix up with some good battles, overall the track is not the easiest of the season and it‰Ûªs quite rough, so it‰Ûªs easy to make mistakes but I managed to ride quite good so I‰Ûªm happy about that and let‰Ûªs see how we do tomorrow‰Û 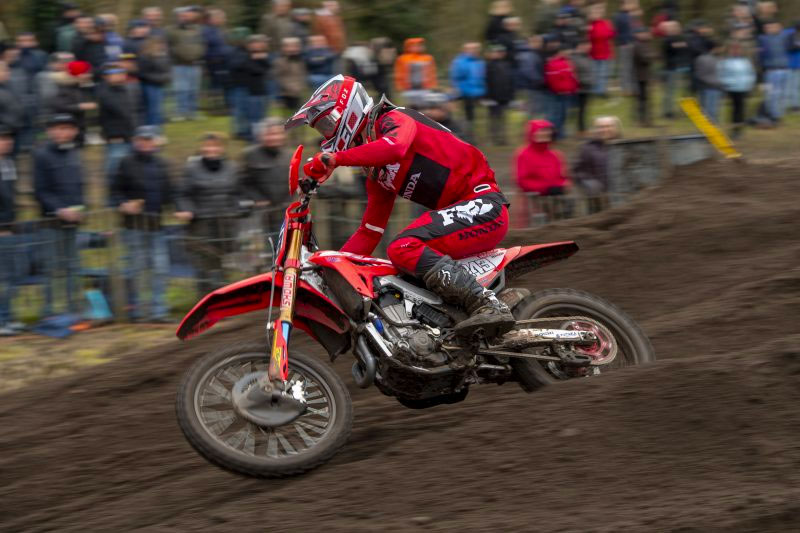 "Today was very difficult as the track was tricky and technical to ride, but at the same time, it also made it fun," Evans said. "It‰Ûªs a surface I haven‰Ûªt really ridden much in life, so I was just trying to get in laps and focus on learning it. In the qualifying race I got off to a bad start and was riding way too aggressively and trying to make stupid passes on a one-lined track, which nearly caused me to crash. Then I did crash, which lost me a few positions but after that, I rode a lot better and was actually happy with my riding. I‰Ûªm looking forward to tomorrow‰Ûªs racing where I‰Ûªll try to make sure I ride like I did towards the end of that moto." 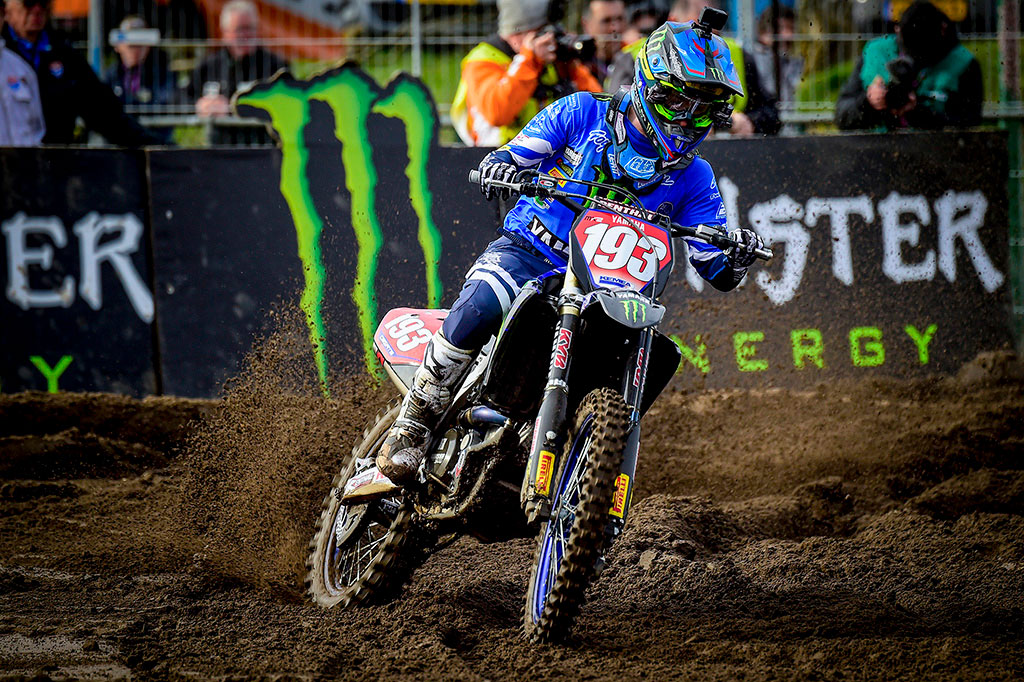 Jago Geerts has been fastest in MX2 Qualifying for the first two rounds of the season.
MX2 qualifying race saw Monster Energy Yamaha Factory MX2‰Ûªs Jago Geerts out in front, as he got a fantastic start and led the way from early in the race. Out of the start he was closely followed Roan Van de Moosdijk, Tom Vialle and Hitachi fuelled by Milwaukee rider Bas Vaessen.

Van de Moosdijk came under pressure early in the race, with a mistake from the Kawasaki rider allowing Vaessen to move through into 3rd. As Geerts continued to lead, with Vialle on his tail, the two had already made a run for it, gapping the Vaessen and Moosdijk.

Alberto Forato had an unlucky race as he crashed out of 12th and would not re-join the race.

Australian Jed Beaton was on a charge, as he passed Rene Hofer and then Van de Moosdijk to move into 4th place. Unfortunately, just a few laps later he crashed, dropping down to 7th place, where he would also finish the race. His team-mate Thomas Kjer Olsen also didn‰Ûªt have the best of luck, as he crashed out of 8th place and did not carry on with the qualifying race. 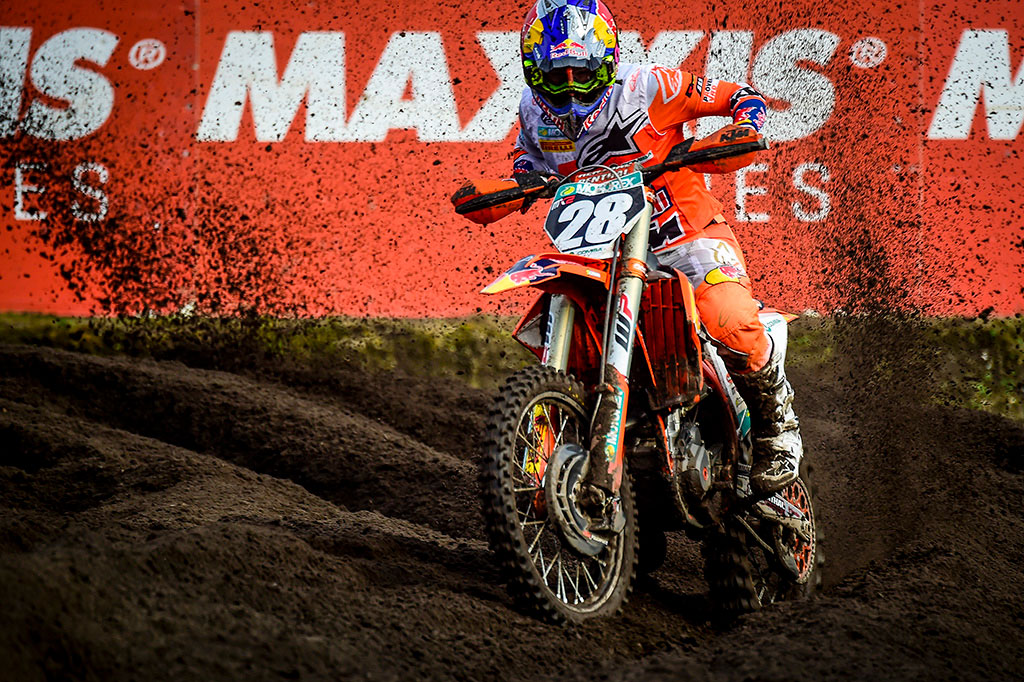 With 3 laps to go, Hofer moved past Van de Moosdijk to secure P4 in the race. But in the end it was Geerts who took the his first qualifying race win of the season, finishing an impressive 14.408 seconds ahead of Vialle and Vaessen who rode strong to P3. Hofer followed in 4th after making a pass on Van de Moosdijk with a few laps to go.

‰ÛÏI felt good on track all day and in the qualifying I got the holeshot. I rode a solid race for the whole thing and I won the qualifying, it‰Ûªs my first qualifying heat win and I‰Ûªm really happy with that and really looking forward to battle tomorrow," Geerts said. "I just want to do good tomorrow, a couple of good starts and we‰Ûªll see, I just want to ride good and hopefully we end up on the podium again‰Û 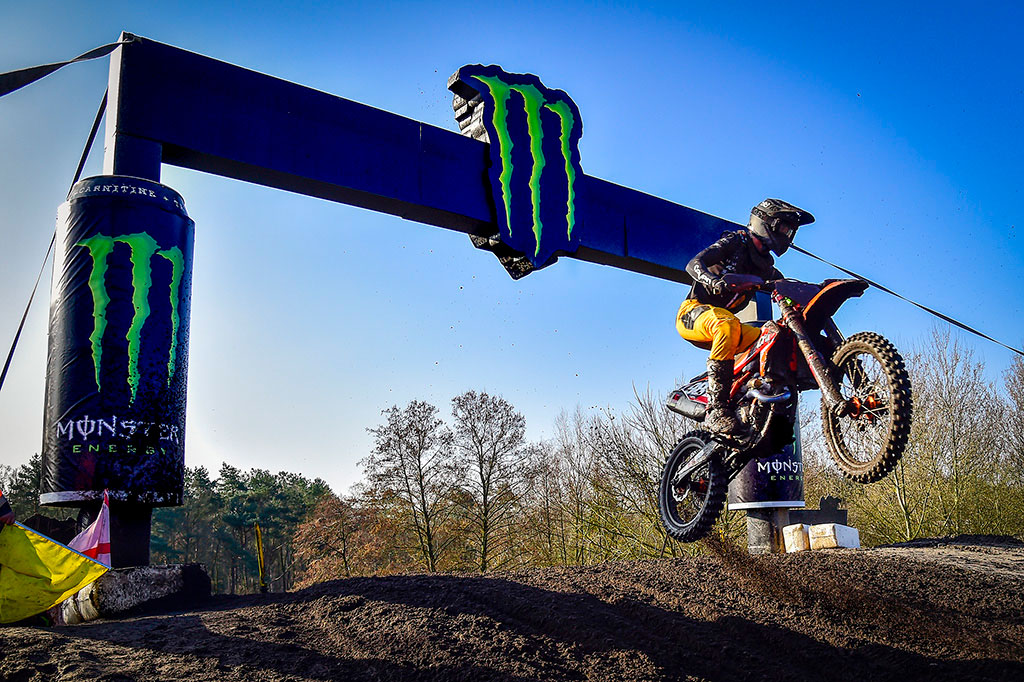