The MXGP of Portugal is off and running in Agueda after today‰Ûªs racing. Arminas Jasikonis took his first win of any kind in the FIM Motocross World Championship today, qualifying pole in MXGP, while in MX2 Thomas Covington took his 3rd qualifying race win of the season.

Team Suzuki World MXGP‰Ûªs Arminas Jasikonis has been showing flashes of brilliance since Valkenswaard but today he was able to accomplish a Qualifying race win. The win marks the first in his career but also the first win for a Lithuanian in MXGP. Jasikonis moved into the lead on the opening lap and held it for the remainder of the race.

‰ÛÏThe start wasn‰Ûªt great but I managed to come out of the turn in first as everyone pushed wide and I cut inside. From then on I led the whole race and I took the qualification win," Jasikonis explained,

"I certainly didn‰Ûªt expect it before the race; I expected to fight of course but to win was a very nice result. It was a really big win, I never really thought about it too much as a year ago I wasn‰Ûªt even a GP rider. Since then I‰Ûªve put in the hard work and it‰Ûªs really paid off. It‰Ûªs crazy how hard work can change everything and I must give a big thanks to Stefan and Harry Everts for helping make this happen. Thanks to my physical trainer and my whole team who have done such a great job.

‰ÛÏIt‰Ûªs still tough for me to lead races, I need to get used to it more. I started to make some mistakes for a couple of laps which allowed Max Nagl to close up, but then I reset myself and told myself not to let him get too close and to just keep on working. I managed to do some good laps after that and that made me quite safe when I crossed the line for the win.‰Û 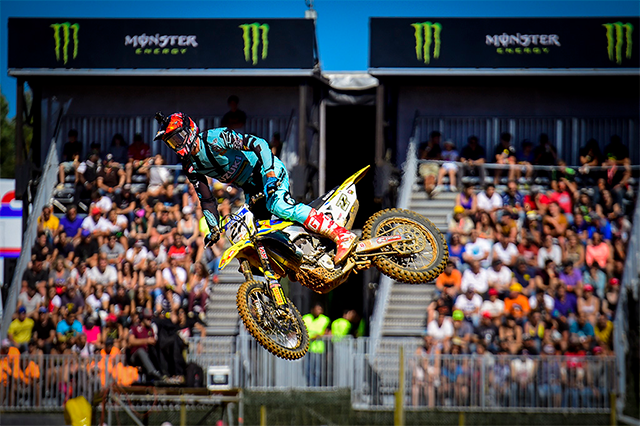 Arminas Jasikonis took Pole in MXGP
The fastest rider in MXGP‰Ûªs time practice was Monster Energy Yamaha Factory Racing‰Ûªs Romain Febvre. Febvre started the qualifying outside the top 5 but he used his speed to get into it by the first official lap. From 4th he battled to third and then lose the position but on the last lap capitalized on another rider‰Ûªs mistake. Finally finishing 3rd, Febvre is well set for a chance to win tomorrow.

Points leader and Red Bull KTM Factory Racing‰Ûªs Antonio Cairoli struggled after the start losing positions as he tried to find a rhythm on the slick surface. From 6th Cairoli got in a groove and started working his way forward eventually finding his way onto the back wheel of Nagl for second. In a last ditch effort Cairoli fell while trying to pass Nagl on the final lap, his mistake would cost him one position finishing 4th.

Team HRC‰Ûªs Tim Gajser had a strong first three laps running 3rd but a mistake took him off track, quite literally, he lost 2 positions dropping to 5th which is also where he finished. Gajser qualifying race is good enough for the 5th gate pick Sunday on a start in which the inside gates are preferable. 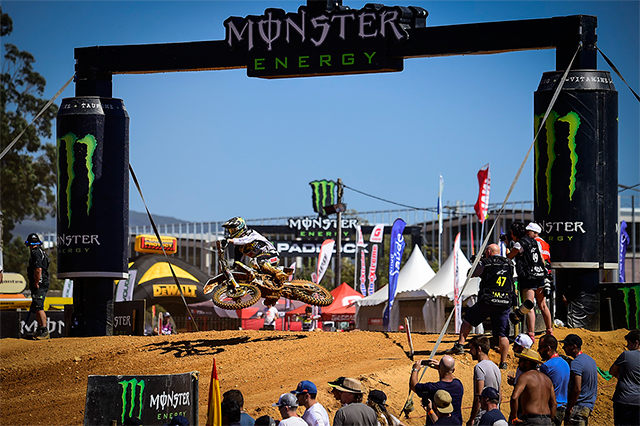 Thomas Covington was the fastest man at the end of qualifying in MX2
Rockstar Energy Husqvarna Factory Racing‰Ûªs Max Anstie came into qualifying confident after a 3rd overall at Lombardia, but finished 12th today. Anstie in the press conference said: ‰ÛÏIt‰Ûªs a difficult track. I rode strong at the end and had a good battle at the end right to the finish, I would like to be battling further up tomorrow but it was a good race, a fun race, it doesn‰Ûªt matter where you are your always in a good battle with someone."

8Biano Racing Husqvarna‰Ûªs Rui Goncalves qualified 20th at his home GP and in the press conference said: ‰ÛÏIt‰Ûªs since 2013 I haven‰Ûªt raced here and it‰Ûªs pretty nice to be here riding at home. Today I tried to push hard and be in the front but it didn‰Ûªt happen so for tomorrow I will need to find some good lines and a good rhythm.‰Û