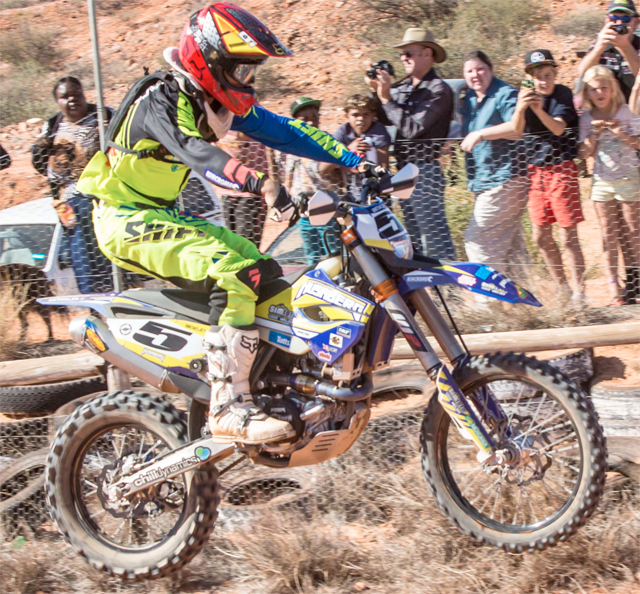 Enjoying a return to the kind of form that established him as one of the premier off road racers in Australia, Jarrod Bewley hopes to again fly the Husaberg flag high at this weekend‰Ûªs KTM Hattah Desert Race, south of Mildura.

Now Bewley, who a month ago illustrated his enviable versatility with a fourth outright in the Finke Desert Race, eyes the event many consider to be one of the toughest on the calendar, the KTM Hattah Desert Race.

‰ÛÏI went home after Coonawarra to do a few things and I‰Ûªll be out at Mildura tomorrow." Bewley stated. "I used last weekend‰Ûªs AORC round to do a bit of a setup run with the FE501 in tight and sandy conditions which will be useful.

"I know the Hattah race and the setup I‰Ûªm chasing - I tried the same setup at Finke during pre running. Hattah is definitely a lot slower with speeds nowhere near as fast apart from a couple of straights, and I‰Ûªll let the damper help stabilise the bike in the super fast stuff.

"This year I‰Ûªm in good shape and I‰Ûªm going there to do well. I‰Ûªm feeling like I‰Ûªm getting back to where I was and taking that confidence into Hattah. I‰Ûªve always tried to be a rider that can adapt to any event and that seems to be paying off pretty well.

"It was a real pleasure putting the ‰Û÷berg on the outright podium last week. I can‰Ûªt remember when that last happened at outright level and it was great to be able to do it," he continued.

"This is my fourth Hattah - it‰Ûªs a race I enjoy and it‰Ûªs a tough one. Last year I had a chance at a podium but because of an injury I had from Finke I withdrew for safety reasons. It‰Ûªs one of those big races that the whole town gets behind and it makes for a great atmosphere.

"Friday night we‰Ûªll have scrutineering in the main street of Mildura, and then the prologue is just a great day with a lot of spectators. You only get one chance to do well and it‰Ûªs all a pretty cool lead up to a really gruelling 4-hour. A really good atmosphere always brings you back, that‰Ûªs for sure.‰Û