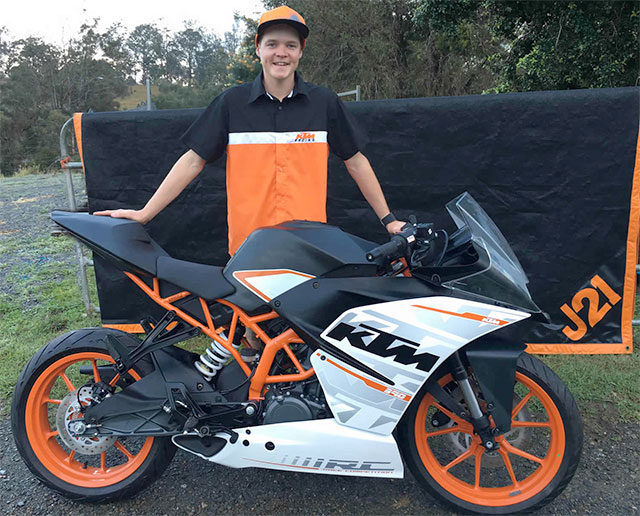 Exciting young KTM Australia and Wide Bay Motorcycles dirt tracker Jarred Brook will take what could be a very important step in his young career, when he turns his first few laps on a race track of the bitumen variety, on a KTM RC390.

Brook has been invited back to the US to compete at the last round of Moto America ‰ÛÒ the US road racing championship ‰ÛÒ on September 9-11 at New Jersey Motorsports Park, where he will ride in the KTM RC390 Cup round.

It‰Ûªs been a stellar couple of months for the 18-year-old apprentice carpenter from Gympie, who last month won the prestigious AMA Dirt Track Horizon Award and three AMA Grand Championships during his US trip, then less than a fortnight ago won three titles on his KTM 250 SX-F and KTM 450 SX-F machines at the Australian Dirt Track championships at Barleigh Ranch.

Brook‰Ûªs weapon of choice for the upcoming event will be KTM‰Ûªs wolf in LAMS clothing, the RC390.

An agile, pure sports bike, the RC390 boasts an incredibly light, 36kg, 44hp, 375cc fuel-injected engine in a Moto 3-styled package that delivers scalpel-sharp handling in either the peak-hour rush or the race track.

And speaking of the race track... The one not entirely insignificant stumbling block in Brook‰Ûªs RC390 project is that as of yesterday Brook had never ridden a motorcycle on a bitumen race track.

KTM Australia has enlisted the help of a man who knows plenty on the subject ‰ÛÒ three-time World Superbike Champion Troy Bayliss ‰ÛÒ and with Brook‰Ûªs outstanding talent and feel, both Bayliss and KTM believe it‰Ûªs possible for him to adapt within the constraints of the very short time frame, and take an important first step into road racing.

"I‰Ûªll be doing the last round of Moto America in the RC Cup class at New Jersey Motorsport Park, and it‰Ûªs pretty damn awesome! I‰Ûªve never been on bitumen before, but KTM Australia has given me an RC 390 to practice on - I haven't ridden it yet but it's pretty awesome; looks cool, feels good to sit on and sounds good," Brook said.

"I can‰Ûªt wait! I will be practising on that for all of this week and next week. I'm going down today to do some practice with Troy Bayliss, cut a few laps with him and he can hopefully give me a few tips.

"I've been wanting to have a go on the road for a fair while now, and KTM Australia has been interested too, it's just come about a little bit quicker than we intended. I think the cornering will be the biggest thing to get my head around, with the extra grip and everyone just two-wheeling with their knee down, where I‰Ûªm used to sticking one foot down instead.‰Û