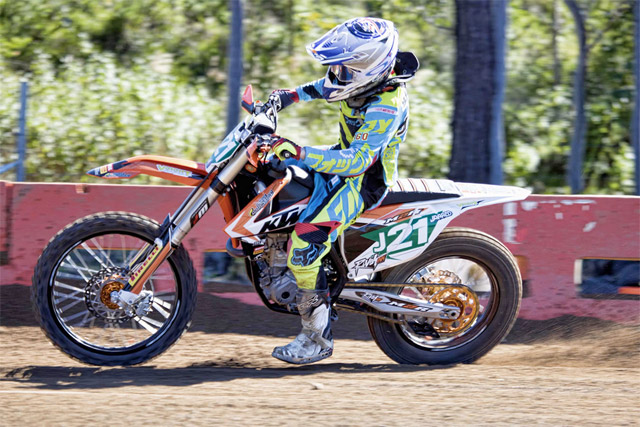 KTM Australia and Wide Bay Motorcycles rider Jarred Brook has become the most successful rider across the weekend‰Ûªs Australian Dirt Track championships at Barleigh Ranch, after winning three of the five classes he competed in aboard his brace of KTMs.

Using his 2016 KTM 250 SX-F and KTM 450 SX-F machines to good effect, Brook made off with the Australian Pro 250, Under 19, and MX Open categories - the first senior Australian dirt track titles of his career for the apprentice carpenter from Gympie, Queensland.

The achievement comes hot on the boot heels of the three American Motorcyclist Association Grand Championships and the prestigious AMA Dirt Track Horizon Award which the exciting 18-year-old won while touring the United States last month. At Barleigh Ranch, Brook ran away with the Under 19s championship on his Danny Apro (KTM Racing Team Engineer)-tuned KTM 450 SX-F, winning comfortably ahead of Hayden Spinks and Ty Lynch.

Switching to his KTM 250 SX-F he again forged a small breathing space to win the Pro 250 class, this time from Lynch and Lachlan Ellis.

While those two victories were relatively comfortable however, the closeness of the Queenslander‰Ûªs victory over national champion Luke Richards in the MX Open category prompted the young but highly experienced Brook to describe the battle as ‰ÛÏthe best race I have ever had.‰Û