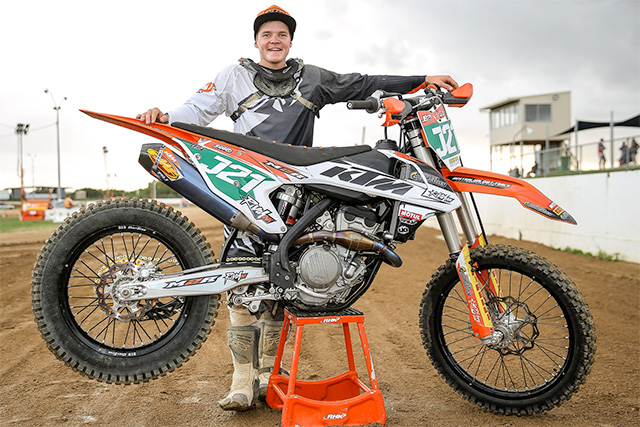 The 19-year-old carpenter from Gympie entered five classes for the event, and came to the Mick Doohan Raceway at Banyo hopeful of stamping his authority at what is his home circuit.

He did exactly that. Riding two machines, his KTM 250 SX-F and his KTM 450 SX-F, Brook was a picture of excellence, winning every single heat and final across the weekend, with the exception of one Pro Unlimited final.

Even as the track evolved over the course of the event, his KTMs (and his lightning trigger finger) kept pace with the varying traction levels, delivering him at turn one either with the holeshot or as second wheel on every single drop of the gate!

Despite the quality field Brook won five classes; the Pro Open, Pro 450, MX Open, Pro 250 and U19, however only four titles as the U19 had insufficient competitors to constitute a championship. 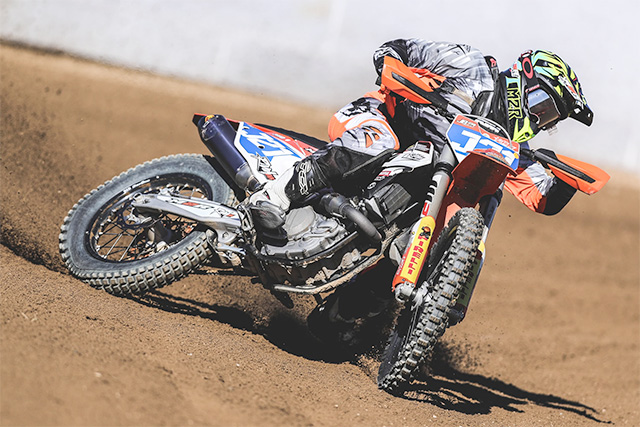 Jarred Brook reigned supreme in the weekend‰Ûªs Queensland Long Track titles. Photo Credit: Steve Hope
Juggling a fledgling road racing career, with a dirt track career in which he is anything but, Brook is disappointed he'll miss this weekend‰Ûªs ASBK round 4 in Darwin due to a work commitment.

He‰Ûªll be back aboard the KTM RC 390 in August as the series continues in Warwick, and is quick to confirm that adapting his very rear-wheel-steering dirt style to road racing to open up potential career options on the tar is still high on his list of priorities.

"It meant a lot, being my home track," Brook said. "We‰Ûªve had a Queensland title there before in 2015, but it didn‰Ûªt go quite as I‰Ûªd wanted. So, it was good to come back and dominate like I did.

"I had a few good battles with Sean McLellon and Kayden Downing ‰ÛÒ they were both riding extremely well and were always right on my tail.

"I tried to keep my mind as focussed as possible and nail my starts every time ‰ÛÒ it makes it a lot easier when you‰Ûªre not getting rocks thrown at you!

"I‰Ûªve done lots of testing on both my 250 and my 450 to get the suspension setups 100%, but the engines are basically stock; just cleaned up a little bit and fitted with FMF pipes on both.

"The KTMs are such good dirt track bikes because of the amount of power out of the box, and the smoothness of that power. In dirt track, trying to go forward is the big thing, so with the nice, smooth power you don‰Ûªt spin the wheel as much when the dirt inevitably gets pushed wide and it gets slick. The KTMs love the slick tracks when it gets challenging, with the smooth power delivery.

"We couldn‰Ûªt make Darwin happen, but we‰Ûªre still definitely doing the road stuff as well, and my next ride is the Morgan Park ASBK in August. We‰Ûªre loving that; getting faster and faster and learning more each time I ride. Learning how to set it up better, and how to change my style so I can be faster on the track.

"It‰Ûªs pretty hard to compare dirt track to the road bike - they‰Ûªre completely different animals to ride! Completely different styles and your actions have to be smoother and more flowing on the tar, you can‰Ûªt just turn it and point and shoot like a dirt bike.

But we definitely still have an eye on road racing in America or Europe as a career goal," Brook concluded. 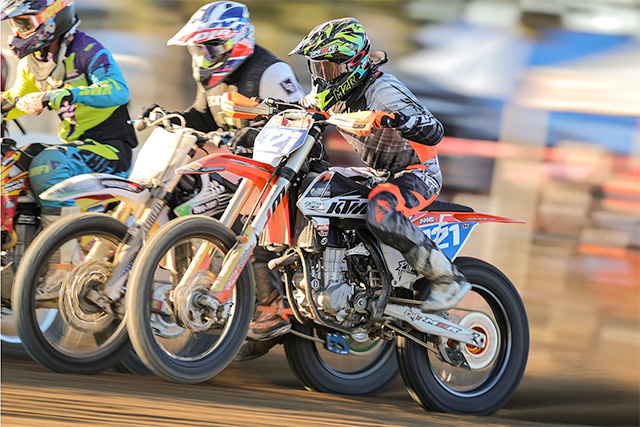