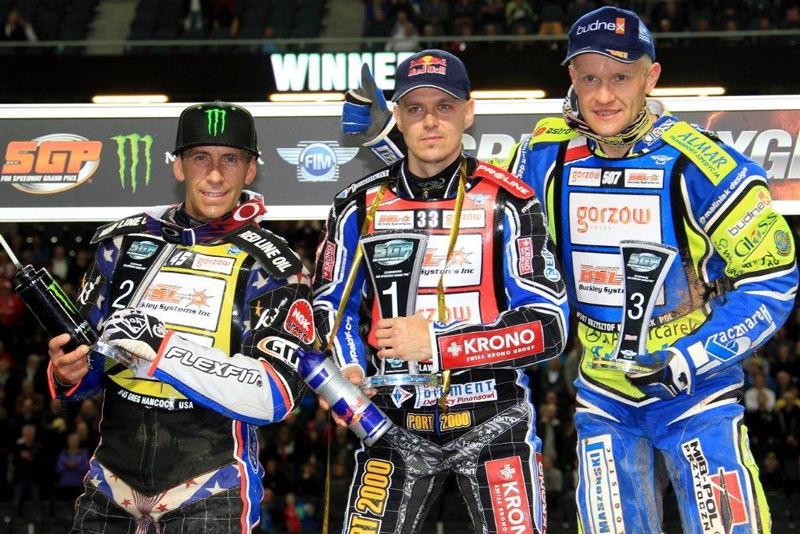 Jaroslaw Hampel refused to let his nightmare run of form break him after transforming his season with an unforgettable 21-point maximum to win the TEGERAå¨ Scandinavian FIM Speedway Grand Prix in Stockholm.

The Polish racer managed just 12 points in the previous four rounds, including a shock zero in his homeland at Gorzow.

But he ended one of the most difficult spells of his career in spectacular style, romping to a sensational seven wins at the Friends Arena to record the first SGP maximum since compatriot Tomasz Gollob went through the card unbeaten in the 2010 Nordic SGP at Vojens.

Hampel triumphed in the final ahead of World Championship leader Greg Hancock, who is now just a maximum of 10 points away from becoming a triple world champion after taking a 12-point advantage at the top.

But the night belonged to Hampel. The rider was elated to end his crisis of confidence and rocket from 14th to seventh in the World Championship, putting himself on course for automatic qualification for the 2015 series.

While Hampel admits he doubted himself for a while, he was delighted he didn‰Ûªt let his troubles beat him.

‰ÛÏA few weeks ago, I was thinking I wasn‰Ûªt good enough to race speedway because I was totally down." Hampel said. "It‰Ûªs so hard to race if you are not 100 percent sure when you sit on your bike. It‰Ûªs really tough to fix all of your problems in one day or one moment.

‰ÛÏAfter so many bad races, I‰Ûªve been working really hard on myself to find a reason and find the problem that was causing me to go so badly. It‰Ûªs not that easy. Sometimes you need to take one step back to make two steps forward. I feel like I did that.

‰ÛÏI‰Ûªve had some trouble with the bikes of course, but when I‰Ûªve been out on the track, I haven‰Ûªt believed in myself. I‰Ûªm not broken, though. I tried to think positive and I learnt a lot day by day about myself; I figured out the best thing for me to do and how to enjoy it again. I feel much better now.

‰ÛÏSometimes it‰Ûªs so hard to find the right way out straight away. If you race for so many years at a good level and then suddenly everything dives very deep with your performances, it‰Ûªs so hard to get back to a good level. But I‰Ûªve learned so much and this has opened my eyes to the people around me ‰ÛÒ who is with me and who is not.

‰ÛÏI can sit on my bike and enjoy it again. This is most important. I felt that on the track today and I hopefully I can feel it until the end of the year, and next year of course.‰Û