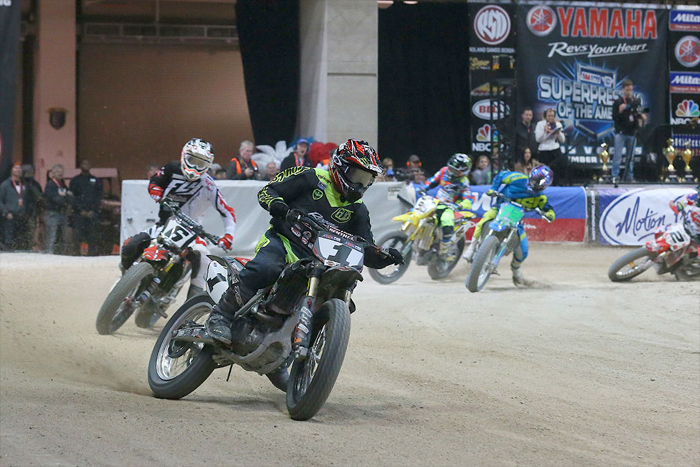 Jared Mees capped off a weekend for the record books tonight, as he took home the inaugural Superprestigio of the Americas checkered flag less than 24 hours after capturing his third Grand National Championship in four seasons.

Mees failed to get the holeshot on lap one, a mistake that's proved costly for hopeful winners throughout the course of the weekend. However, the Michigan native continued to fight and eventually regained the lead by the time he finished the second lap.

Mees and Brad Baker went on to fight neck-and-neck during the next two laps, but when Baker came out of turn four on lap five, he went too high and nearly crashed into the wall. Baker's error proved to be the pivotal moment in the race, as he was never able to regain the lead and ended up finishing second behind a charging Mees.

Though it's always bittersweet to finish second-best, Baker was happy to put together the performance that he did Saturday night, as it's been over four months since his last podium. Baker's effort is a good indication that he has completed healing from injuries sustained at Black Hills Speedway earlier this season.

Kenny Coolbeth Jr. bounced back after a tough night on Friday with a third-place finish in the Superprestigio of the Americas on Saturday night, while Larry Pegram led the charge for the All Stars category comprised primarily of road racers, finishing fourth in the main.

Joe Roberts, Oliver Brindley and Roger Hayden rounded out the remaining All Star road racers in the eight-rider field, while Bryan Smith finished last after a crash early in the race.

One of the most noticeable names missing from this list is Friday night's Flat Track Season Finale winner Briar Bauman. Bauman looked flawless yet again early on in the day, as he was the fast qualifier out of every rider that participated in the Superprestigio of the Americas. However, Bauman missed the main event cut line by a single position in the second-to-last race of the night, ending his chances of repeating victories.