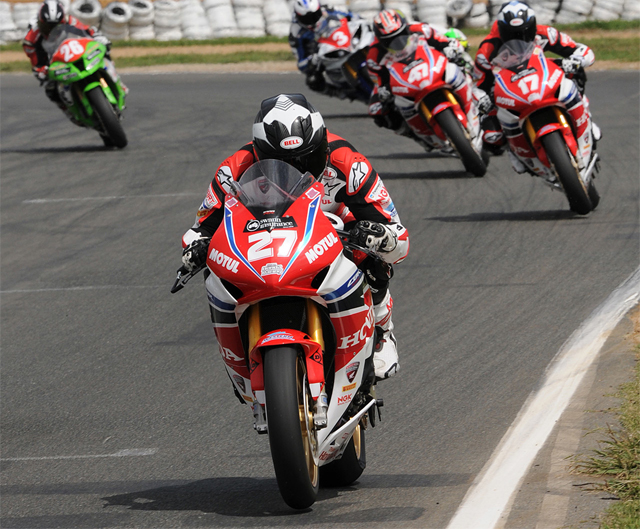 It was a fantastic day of racing at the New South Wales circuit as Team Honda Racing made their mark on the ASC with Motul Honda rider Wayne Maxwell now 3rd in the championship and Troy Herfoss placed 5th.

The starting grid for the 3 Superbike races saw Herfoss on Pole after recording the fastest lap of the day Saturday, a lap record 58.793 sec. Stauffer started today‰Ûªs races from P3 and Maxwell from P5.

Superbike Race 1 was a very close race and although Stauffer got a strong start and lead the field into lap 1, the battle that ensued was a sign of things to come with much dicing throughout the 11 laps. Stauffer finished Race 1 in 3rd place, Herfoss 5th and Maxwell in 6th onboard his Motul Honda.

The final battle in Race 3 this afternoon was very fierce and Team Honda Racing had no plans to give up the win with all 3 Honda CBR1000RR SPs battling it out with Glenn Allerton on the BMW one final time.

It was the Motul Honda of Maxwell that crossed the line 1st, his fastest lap a 59.025 sec with team mate Stauffer just .146 sec behind in 2nd place.

Stauffer‰Ûªs campaign saw him not only record the fastest lap of the race, but also break team mate, Troy Herfoss‰Ûª lap record for Superbikes at Wakefield Park with a lap time of 58.693 sec. Herfoss raced extremely well in Race 3, often battling for the lead until ultimately finishing 5th.

The man now leading the championship after Round 1 who previously described Wakefield Park as one he struggles most at, is really happy with the weekend‰Ûªs results.

‰ÛÏWe had a really strong weekend to start the season and I am obviously really happy to take the overall win and the championship lead." Stauffer commented at the end of the day. "The Honda CBR1000RR SP is a great package and I felt strong through the weekend to push hard.

"I would like to thank the team for all their effort and I am looking forward to Round 2. It is just the beginning of the season so we will see what unfolds, but we are certainly off to a good start.‰Û