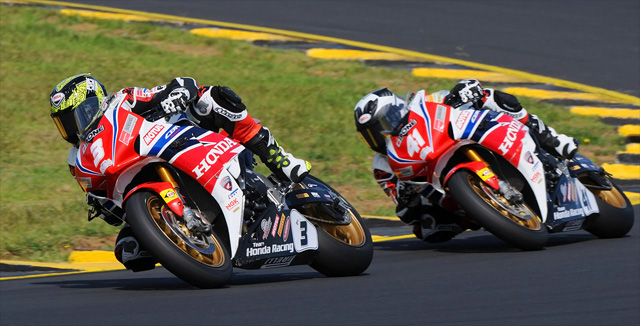 Team Honda Racing's Jamie Stauffer will be back aboard his Honda CBR1000RR SP for this weekend‰Ûªs Round 2 of the Australasian Superbike Championship alongside current series leader Troy Herfoss.

Stauffer, who has recovered well from his pelvic injury, was recently given medical clearance to race after successful treatment for a related blood clot.

Having been sidelined for Round 1, Stauffer could but watch as teammate Herfoss and Superbike Rookie Aiden Wagner took on the field at Sydney Motorsport Park in a very successful start to the season.

Wagner and Herfoss traded race wins throughout the weekend, but Herfoss emerged the victor overall and heads into Round 2 at Mallala Raceway the series leader. Herfoss is well aware that the battle has only just begun.

‰ÛÏI am very happy to start Round 2 in the lead, but of course it is only the beginning of the season and it is a long road to the title." Herfoss said. "We tested recently at Mallala in some varying conditions and I feel we are heading in the right direction with the bike for sure.

"I‰Ûªm really looking forward to the weekend and having Jamie back in mix will be terrific.‰Û