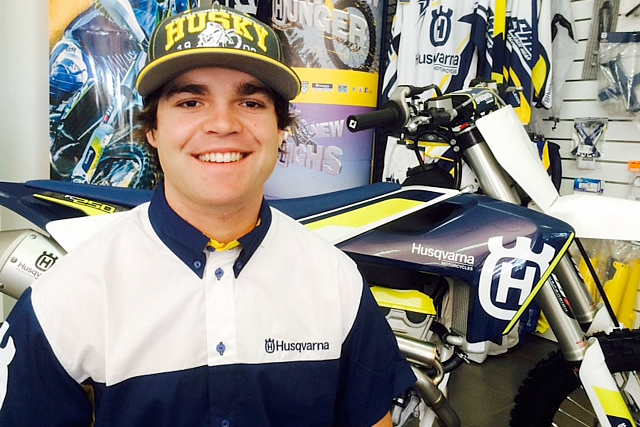 One of Australia's most exciting young rising stars has joined forces with respected offroad pioneers Husqvarna, with Husqvarna Australia announcing the addition of Jacob Wright to an expanded SD3 Husqvarna team for season 2016.

Wright burst into the motocross spotlight last year when, in the Premier MX1 category of the MX Nationals he took two SuperPole victories and made four podium appearances, including sensational victories at Raymond Terrace and Gladstone.

A significant knee injury sustained during training for the 2015 series however ruled him out of the entire championship and derailed his bright career.

Husqvarna Australia though, is prepared to back the 20-year-old young gun‰Ûªs shot at resuming his career trajectory, and has given him the opportunity to race the exciting new Husqvarna FC450 in 2016.

‰ÛÏI'm really excited, it's a new bike and a new team and everyone in the team is really enthusiastic about their job." Wright commented. "It's going to be a good atmosphere to be involved with at the races.

"I didn't have the best of years this year - I didn't really get to do any racing because I had a knee injury, so I'm on the charge back to the top. Physically I'm ready to go. I‰Ûªm 100% back and healthy and ready to storm 2016.

"I‰Ûªve had a lot to do with Jon (HQVA National Brand Manager Jon Hafey) since I was about 10 years old and he's helped me a lot over the years. I met Steve McKinnon in 2013 through Luke Arbon and ever since then we've been mates and talked, so it is nice that all this has come about and we are now here.

"It's so nice after the year that I've had, to be able to walk into a deal like this, it's unbelievable and I am so thankful. I just can't wait to have a wicked year!

‰ÛÏHaving Brett Metcalfe at Wayville Supercross we learned that having riders in both classes was something really good and we are excited to have two of the most talented guys in Australia on their day on the SD3 Husqvarna team." Team owner Stephen McKinnon said.

"I'm an absolute motorbike freak and a frustrated racer - I raced motocross in South Australia as a kid and I was terrible, but I've been blessed in my business life and I'm passionate about motorcycle racing - it's something that my family loves.

"I met Luke when he moved over to Husqvarna and a guy I knew from school asked me to get involved from a sponsorship perspective. I got to know Luke and his family and we consider Luke part of the family. It‰Ûªs critical to me to have good people around us and Jacob is a good kid as well.

"The thing I like about Jacob is, everyone can see he's got the talent. He didn't get the ride at CDR because he‰Ûªs a nice guy. He got it because, I think, he is the most talented guy in Australia on his day.

"I come from an IT world, but our entire business is about getting the best out of ourselves and I want to see Jacob performing at his 100%. I think if he does that, I‰Ûªd challenge people to stop him!‰Û