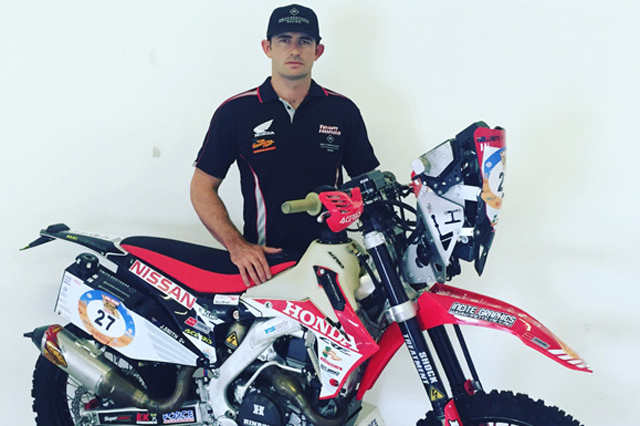 The ADDC is round one of the FIM cross country rallies championship held from the 1st-7th of April.

It was a tough week of racing for Jacob as he sustained a broken scapular during the Condo 750 the weekend prior to the start of the Abu Dhabi race. Nevertheless, he fought hard to come away with some valuable rally experience.

The ADDC is a five day cross country navigational rally held in the Liwa desert south of Abu Dhabi in the UAE. Running off the same navigational principles as The Dakar Rally, competitors cover a total of 2079km across the five stages.

Day one saw Jacob complete the Prologue with an impressive 12th position despite a fall in the first turn.

"I couldn't believe it, they had some rain in the lead up and I didn't anticipate it to be as slippery as it was. Before i knew it i was on the ground and landed straight on my injured shoulder." Smith reflected.

The top 15 riders are able to choose their starting position for leg 1, Jacob chose to start from position 31 out of the 39 strong field. Race strategy plays a big role in the ADDC, with the top riders always choosing to start from the rear of the field. 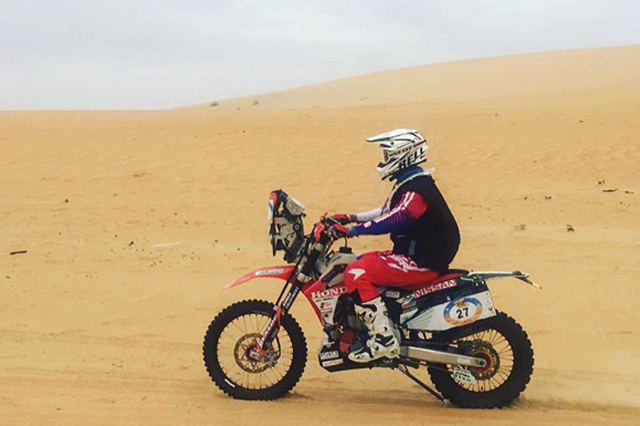 Jacob Smith in action during the 2016 Abu Dhabi Desert Challenge.
With minimal test time in the lead up to the race, Jacob had a day to forget. Riding in some intense pain and having fuel transfer issues, he ran out of fuel on three separate occasions and as a result, finished 19th for the day.

"I was in pain with my shoulder and couldn't ride the bike very fast at all but I was making up some positions." Smith explained. "Around the 100km mark I realised that the fuel transfer system had issues and I ran out about 40km before the refuel.

"I got a message through and luckily the sweep team were close by and they got me going again; loosing around 15 minutes. Close to the finish, I had the same issues and had to stop twice using my hydration pack to drain fuel from the rear tanks into the hydration pack then into my front tank."

With fuel problems sorted, day two and three saw Jacob endure a total of 558 kms of desert and sand dunes. Finishing 12th and 11th, he managed to move up into 13th position overall leading into day four.

With temperatures rising, 40kms into stage four, significant electrical issues meant that Jacob stopped a number of times in an attempt to resolve the problem. After just making the refuel, his service crew was unable to rectify the problem.

He continued on without the battery system that is responsible for the fuel transfer pump, GPS system and Thermo Fans. This ultimately cost Jacob his race, with high temperatures and low speeds in the dunes the bike overheated 10km's from the stage finish, resulting in an engine failure.

"Once we lost the Thermo Fans I knew it was going to be a tough ask to get the bike to the finish of the stage. It was so hot out in the dunes and I tried my best to get the bike through. I stopped several times to cool the bike down and used all the water I had on me but pulled up 10km short."

It was a disappointing end to a gruelling week for Jacob and the crew with minimal time to prepare the bike along with Jacob's injured shoulder.

"I knew that something wasn't right with my shoulder." Smith continued. "I was riding at 50% and couldn't really stand up at all but we had put too much time, effort and money into the trip and a little bit of pain wasn't going to stop me.

"The pain definitely tested my mental strength though, I had to push hard to get through on several occasions. It was a shame to get so close and not make the finish line. I wanted to be able to show my true potential on the world stage but thats just the way it goes.

"We expected to have some teething issues with the bike having so little time to test but I'm proud of the boys efforts over the week and we did what we could to make it as far as we did. I would really like to thank Geoff Olholm at Cairns Coconut Holiday Resort and Troy O'Connor from The Blackbutt Hotel for all their time and effort, without them the whole operation wouldn't of happened.

"A big thanks to Don McGrath from CPW for all the logistical support and Griffo, my mechanic done an awesome job all week. It wasn't the result we had hoped for but I still had a good time and will take away so much from the experience." Smith concluded.

Preparations for the Finke Desert Race are well underway for Smith brothers Racing, it will see the return of former winner Todd Smith along with Jacob who will be fit and ready come June long weekend.